Former President Ronald Reagan enshrined in law the public’s right to know what dangerous chemicals are in our communities. But Trump Republicans have killed off an online mapping tool that lets us easily do that.

ToxMap, a feature of the National Library of Medicine, which bills itself as “an international leader in health informatics research and development,” went dark Monday.

“Our National Library of Medicine has now joined this administration’s ideologically-driven anti-science crusade, effectively shrinking the public’s access to environmental as well as disease and mortality data,” wrote Chris Sellers, a professor of environmental history and politics at Stony Brook University in New York.

Much of the information fromToxMap is still online but scattered among different web sites, making it more difficult to learn about pollution and the polluters who are Trump’s pals and campaign contributors.

Former EPA officials have described making toxic release information available to anyone who wants it as “among our most potent environmental weapons.” 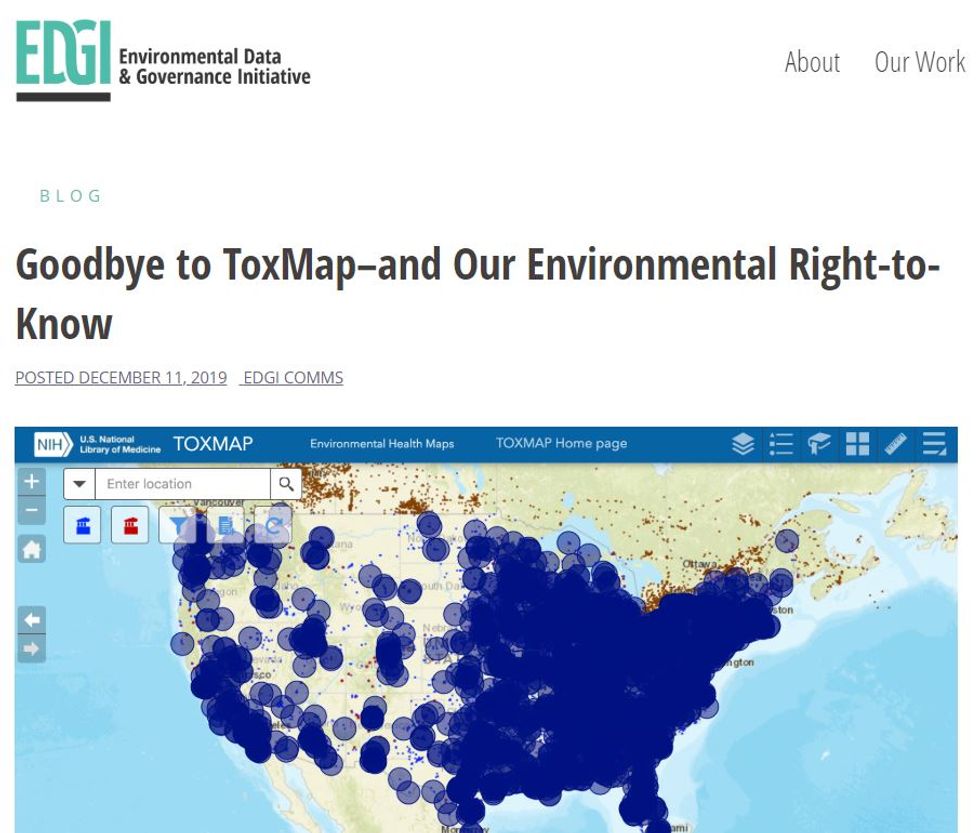 Shuttering ToxMap is part of Trump’s push to roll back environmental rules and regulations.

The New York Times counted 85 rollbacks or rollbacks in process. These actions, which include canceling a requirement for oil and gas companies to report methane emissions and shrinking two national monuments in Utah, could significantly increase greenhouse gas emissions. That would lead to thousands of extra deaths each year from poor air.

Reagan signed the Emergency Planning and Community Right-to-Know Act in 1986. Public demand for information about chemical releases had skyrocketed because of a pesticide release at a Union Carbide plant in Bhopal, India, in 1984 that killed thousands and a toxic chemicals release in 1985 from a Union Carbide plant in West Virginia. The law had overwhelming support from Republicans and Democrats.

Anderson, whose church is part of the New Independent Fundamentalist Baptist movement, is known for several abhorrent views, the report noted.

"Faithful Word Church calls for punishing homosexuality with the death penalty in the doctrinal statement published on its webpage," said the report. "But that demand seems mild compared to the seething rhetoric Anderson has unleashed against the LGBTQ community: in a 2014 video posted to his now-deplatformed YouTube account, he declared "'if you executed the homos, like God recommends, you wouldn't have all this AIDS running around.' In 2016, he applauded the the mass shooting at the gay nightclub Pulse in Orlando, asserting 'there's 50 less pedophiles in this world.'"

But Anderson's views go much further — he is also virulently anti-Semitic and denies the Holocaust happened.

"Anderson ... has demonstrated a particular animosity toward Jewish people, as evidenced in titles of the sermons listed on his IMDB page, which include 'The Jews Are Our Enemies,' 'The Jews Killed Jesus,' 'Unbelieving Jews Are Under God's Wrath,' 'Jews Worship a Female God Named 'Shekinah,'' and 'Jewish Synagogue = Synagogue of Satan,'" said the report. "He has also, as the Anti-Defamation League noted in a 2015 report, propagated false claims that millions of Jews were not gassed and cremated in Nazi concentration camps during World War II." He also published a video calling Dr. Martin Luther King, "Marxist Lucifer King," a "false prophet," a "sexual pervert," and a "Communist tool."

This comes shortly after Gohmert landed in the news for demanding to know if the U.S. Forest Service can change the Earth's orbit to fight climate change.

"By the Justice Department's count, we now have more than 450 people who have been charged with federal crimes in connection with the attack," he noted. "On Friiday for example, a Chicago Police officer was arrested and accused of breaking into Democratic Sen. Jeff Merkley's office with a mob while wearing a hoodie with the Chicago Police Department logo on it."

"But the other half the equation, right, that hangs over the country is accountability for the political leaders that incited or abetted it after the fact," he explained. "The slow-motion insurrection being carried out by Republicans in suits and ties, who basically winked and nudged their way before January 6th and attempted to overturn a democratic election afterwards. The majority of the House Republican caucus — the majority — and these eight Republican senators, including the likes of Ted Cruz and Josh Hawley and Rick Scott — who now runs the Republican Senate campaign arm — voted to overturn the election."

Hayes noted Boeing has "restarted its donations to three republicans who did, indeed, vote to overturn the election. That is, they voted to install the loser over the winner. to keep him in place running the country, against the will of the majority of the American people."

"We can infer Boeing thinks it's in the interest of the company to support politicians, who, themselves, do not support democratic elections — free and fair elections. That's the message Boeing and others are sending," Hayes explained. "It's a pretty dangerous one, not to mention, I think, pretty stupid and short sighted. It gives aid and comfort to the people who are working, right now, in every state in this union, to plan for the next insurrection."

"Senate Minority Whip John Thune (R-SD) surmised Monday that if a bipartisan package comes to fruition, the only remaining ways for Democrats to pay for a second bill on social spending programs are tax increases — too toxic to pursue. Democrats can pass a spending bill with only Democratic votes, but they need all 50 of their members to be on board," Politico has explained.

Democrats failing to deliver could damper enthusiasm for the party during the 2022 midterm elections.

"What's at stake is perhaps trillions of dollars in spending sought by Democrats to provide paid family leave, raise taxes on corporations and act on climate change. Those policies are more likely to fall by the wayside because, though there's bipartisan hope for physical infrastructure, Democrats' more progressive priorities have no chance of attracting GOP support," Politico reported. "Progressives for weeks have urged Democrats to move swiftly and ditch Republicans in the hopes of getting the most ambitious package possible. A spokesperson for Senate Budget Committee Chair Bernie Sanders (I-Vt.) confirmed he'd oppose a bipartisan package, increasing the number of Republicans needed to sign on. But as of now, it's not clear that Biden's party has the votes to proceed along party lines while sidestepping a filibuster through the so-called budget reconciliation process, regardless of what it includes."