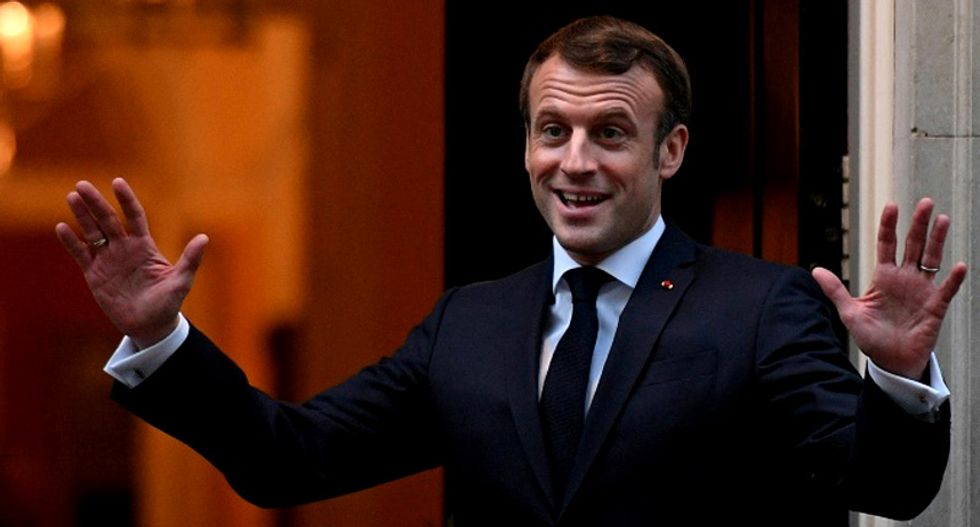 US President Donald Trump launched a blistering attack on France's criticism of NATO strategy as "brain dead" on Tuesday, but French leader Emmanuel Macron doubled down and turned his fire on Turkey.

The three-way battle overshadowed the build-up to the alliance's 70th anniversary summit in London, threatening to derail efforts to show unity in the face of Russia and China.

Macron had tried to shake up the agenda of the meeting by demanding a review of NATO strategy, but Trump -- who arrived boasting that he had forced members to boost defence spending -- hit back hard.

"I think that's very insulting," Trump said of Macron's assertion last month that NATO's is experiencing "brain death" and should focus more on Islamist terrorists and on re-opening a strategic dialogue with Russia, branding it a "very, very nasty statement".

"Nobody needs NATO more than France," he warned. "It's a very dangerous statement for them to make."

Trump later softened his tone at a joint appearance with Macron, but the French leader stood by his statement, going on to lay the groundwork for a difficult meeting with President Recep Tayyip Erdogan by accusing Turkey of working with extremists in Syria.

"My statement created reaction from a lot of people. I stand by it," Macron said, just ahead of a one-to-one meeting with Trump.

"The common enemy today are the terrorist groups, as we mentioned, and I'm sorry to say that we don't have the same definition of terrorism around the table," Macron said, noting that Turkey has attacked the Kurdish militia that backed the allies against the Islamic State.

"When I look at Turkey they now are fighting against those who fight with us, and fought with us shoulder-to-shoulder against ISIS. And sometimes they work with ISIS proxies. This is an issue," he declared, shortly before he was due to meet an already furious Erdogan.

Erdogan has threatened to hold up NATO efforts to beef up the protection of the Baltic republics against Russia, unless the other allies declare the Kurdish militias who fought with US and French forces against IS in northeast Syria "terrorists".

NATO secretary general Jens Stoltenberg renewed his own criticism of the French leader's remarks, saying allies "should never question the unity and the political willingness to stand together and to defend each other".

Trump defended Stoltenberg, boasting that NATO members have massively increased their defence spending thanks to his pressure.

But the president then reiterated his long-standing complaints about European spending.

"When I came in, I was angry at NATO, and now I've raised $130 billion," Trump said, referring to the sum Stoltenberg says Canada and European members will have added to defence budgets by next year.

"And yet you still have many delinquent -- you know I call them delinquent when they're not paid up in full," he said.

Only nine of NATO's 29 members spend two percent of their GDP on defence.

Leaders of the 29 allies are descending on London to lock horns over spending and strategic direction in a major test of unity as NATO seeks to assert its relevance.

If the Macron comments set an angry tone for the meeting, there are also expected to be clashes with Erdogan, who has described the French leader as "in a state of brain death".

Macron and Erdogan will come face to face on Tuesday in a four-way meeting with Merkel and British Prime Minister Boris Johnson, whose spokesman said he would be emphasising the need for NATO unity.

NATO has mooted a plan to bolster the defences of Poland, Estonia, Lithuania and Latvia against a potential attack from Russia, though details remain unclear.

Polish President Andrzej Duda played down the dispute, saying he believed "a good solution" would be found.

But he weighed in on Macron, urging him to stop carping about NATO and come up with "concrete propositions" for how to improve the alliance.

Russian President Vladimir Putin said Moscow was open to cooperation with NATO against joint threats such as terrorism.

The substance of the summit is thin, with only one three-hour session planned, where leaders are expected to sign off on a set of decisions already taken by NATO foreign and defence ministers.

These include making space a full domain of conflict -- alongside land, sea, air and cyber space -- as well as a new report on how the alliance should approach China and its growing international assertiveness.

"We have now recognised that the rise of China has security implications for all allies," Stoltenberg said.

What is likely to be more significant in the longer run is the fallout from Macron's broadside, in which he complained NATO talks too much about money and not enough about strategic priorities.

In response, Germany has suggested setting up an expert panel to look at how NATO can be adapted to address political questions more effectively.