China races against the clock to build virus hospitals 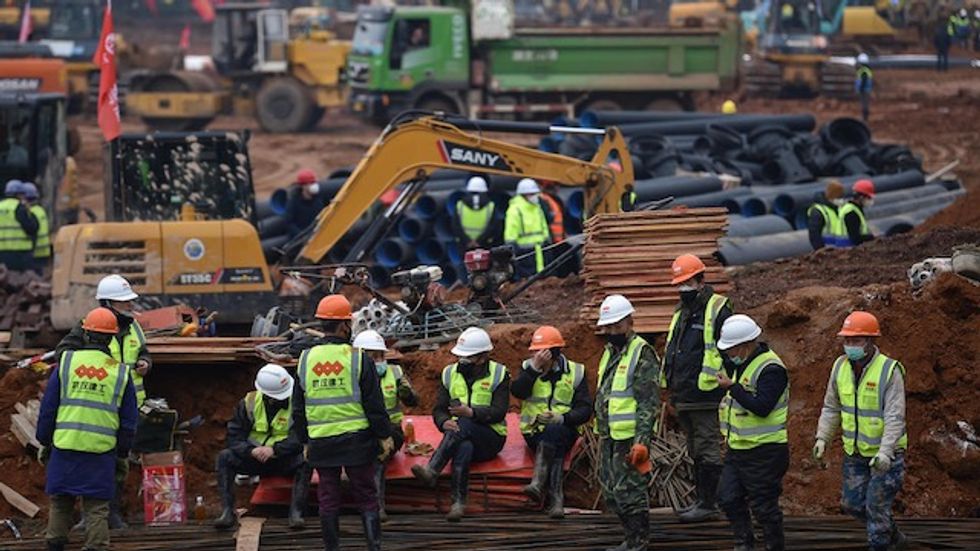 Hundreds of workers are toiling around the clock at the site of a field hospital that China is racing to build within days to treat a rapidly growing number of patients stricken by a deadly virus.

The outline of a floor began to take shape and electrical switchboards were already up on Monday when AFP reporters visited the site of the facility, dubbed "Fire God Mountain", being built in Wuhan, the central city where the coronavirus first emerged.

It is one of two makeshift hospitals that Chinese authorities are rushing to build within a fortnight in the city of 11 million people to relieve medical facilities swamped with patients waiting for hours to see doctors.

Work to build Fire God Mountain started Friday and is due to be ready to receive patients on February 3, according to state media. The second one, named "Thunder God Mountain", will be ready for use on February 5.

The construction workers all wore masks as mandated by the authorities for the entire population of the city, which has been under lockdown since Thursday.

They are checked for fevers when they arrived by bus and again during their breaks.

They worked around a forest of excavators and trucks bringing in prefab material at the site on the southwestern side of the city.

"We have to work fast to combat the epidemic," a worker in his 30s, who refused to give his name, told AFP.

He said he worked nine hours per day, "sometimes less, sometimes more. It depends on what they need".

The 25,000-square-metre hospital will have between 700 and 1,000 beds to treat patients of a pneumonia-like virus that has killed 81 people -- mostly in Wuhan -- and infected more than 2,700 across the country.

The second facility will have 1,300 beds.

"We've mobilised all the workers left in Wuhan to work in shifts to ensure round-the-clock construction," Zhang Chongxi, general manager of the road and bridge company of Wuhan Construction, was quoted as saying by the official Xinhua news agency.

Chen Bingzhong, a former health ministry official, said the facilities are needed because infectious diseases should not be treated in general hospitals.

"Because the infectious power of this virus is too strong, it will infect other patients, including medical staff," Chen told AFP.

China has experience building hospitals in record time in periods of crisis.

In 2003, it built a facility in Beijing within a week to treat patients during the SARS (Severe Acute Respiratory Syndrome) epidemic.

Authorities have used this as a model for the new facilities for the patients ill with the novel virus, which shares genetic similarities with SARS.

Premier Li Keqiang visited one of the construction sites on Monday during his first trip to Wuhan since the health crisis erupted -- a sign of the growing concern among the leadership in Beijing.

"Fast doesn't mean without quality," Li, who wore a mask, told the workers, according to videos of his visit.

"Fire God Mountain" is being erected next to a residential building.

A road outside the construction site is used to park dozens of trucks and construction vehicles. The city's new rallying cry -- "Let's go Wuhan!" -- was written on a banner across the front of a truck.

"Not at all. There are no sick people (at the building site), they are all in hospital."