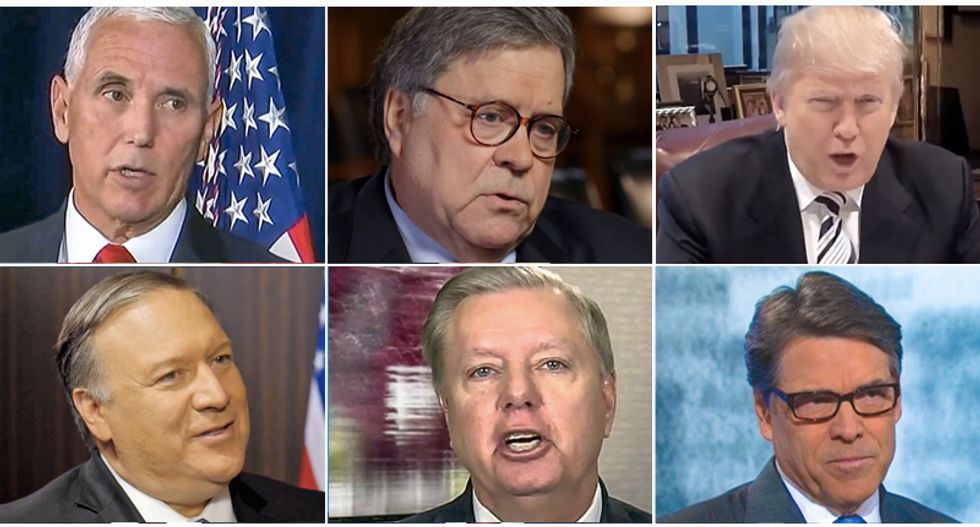 Former Rudy Giuliani associate Lev Parnas sent a letter through his attorney to Mitch McConnell, saying that he is not only is he prepared to testify but he has pertinent evidence that could specifically confirm the guilt of six major Republicans.

President Donald Trump and Vice President Mike Pence were both implicated for being well aware of what Rudy Giuliani was doing in Ukraine and any moves that could achieve their end goal.

As Energy Secretary, Rick Perry was involved with several Ukraine energy company executives or investors. He, too, was well acquainted with the scheme being cooked up, according to Parnas.

Parnas indicated during the interview, he and his attorney Joseph Bondy did with MSNBC's Rachel Maddow, that Attorney General Bill Barr was part of the "team" of people who knew what was going on. However, Barr also was traveling the world trying to cook up an investigation into former Secretary Hillary Clinton. He ultimately failed to find anything.

Secretary of State Mike Pompeo was well aware of what was happening because he was complaining about Giuliani being a cog in the corrupt machine.

Sen. Lindsey Graham (R-SC) has become a dear ally of the president's in the wake of the death of his friend Sen. John McCain (R-AZ). As the chair of the Senate Judiciary Committee, Graham was in a strong position to make decisions that could have hurt the president during the impeachment. Graham was present with Trump on the golf course at the same time Guiliani was at the clubs meeting with Parnas and others. It's unclear what he knows about the plot.