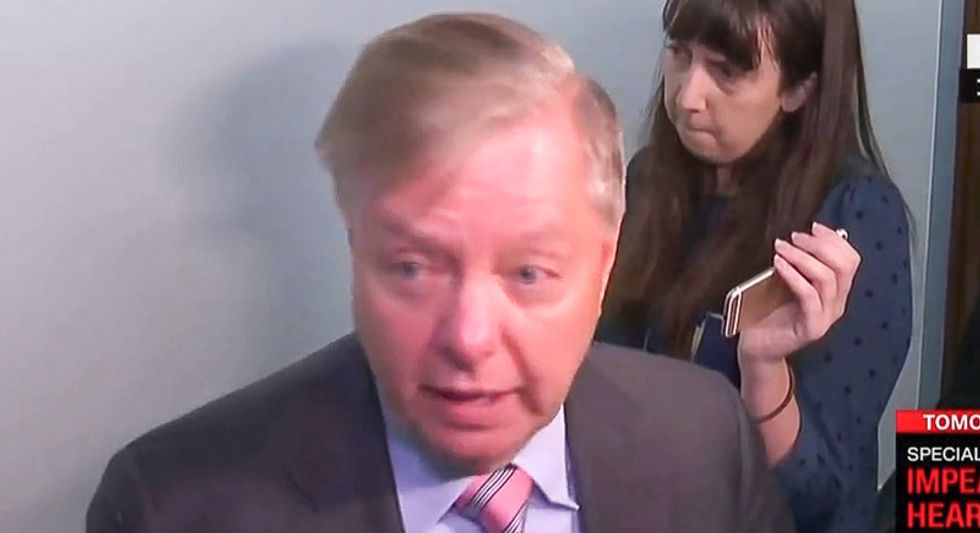 Sen. Lindsey Graham (R-SC) did not appear at a Wednesday press conference after reports linked him to a highly-controversial Ukraine scheme.

According to The Daily Beast, President Donald Trump's attorney, Rudy Giuliani, provided Graham with a letter lobbying for sanctions on Ukrainian officials. The letter was obtained through Giuliani associate Lev Parnas.

Fox News reported on Wednesday morning that Graham was expected at a press conference -- but the senator never showed.

Trump also mentioned Graham's absence during the signing of the U.S.-Mexico-Canada Agreement (USMCA).

Instead of appearing at his news conference, Graham sent out an email decrying the need for witnesses in Trump's Senate trial. Graham's remarks were also transmitted in the form of tweets. He did not, however, address the Ukraine letter.

As of 12 p.m. ET, Graham had still not appeared before reporters.

Read some of the excerpts from his email below.

.@LindseyGrahamSC says more testimony is “unnecessary”: “For the sake of argument, one could assume everything att… https://t.co/juIUmRblvr
— Ben Siegel (@Ben Siegel) 1580313796.0

VERY INTERESTING @LindseyGrahamSC “It is my opinion, based on the law and facts, that additional testimony is unn… https://t.co/YFDJSQ3X8c
— Kasie Hunt (@Kasie Hunt) 1580313805.0

@LindseyGrahamSC "It is clear to me that there is ample evidence for the President to be concerned about conflicts… https://t.co/zab2m83cb8
— Kellie Meyer (@Kellie Meyer) 1580313893.0

@LindseyGrahamSC "However, I am concerned when John Bolton’s credibility is attacked, it makes it more likely some… https://t.co/v3JsCV5JsT
— Kellie Meyer (@Kellie Meyer) 1580313940.0

@LindseyGrahamSC This was all in an email statement from Graham this morning.
— Kellie Meyer (@Kellie Meyer) 1580313977.0