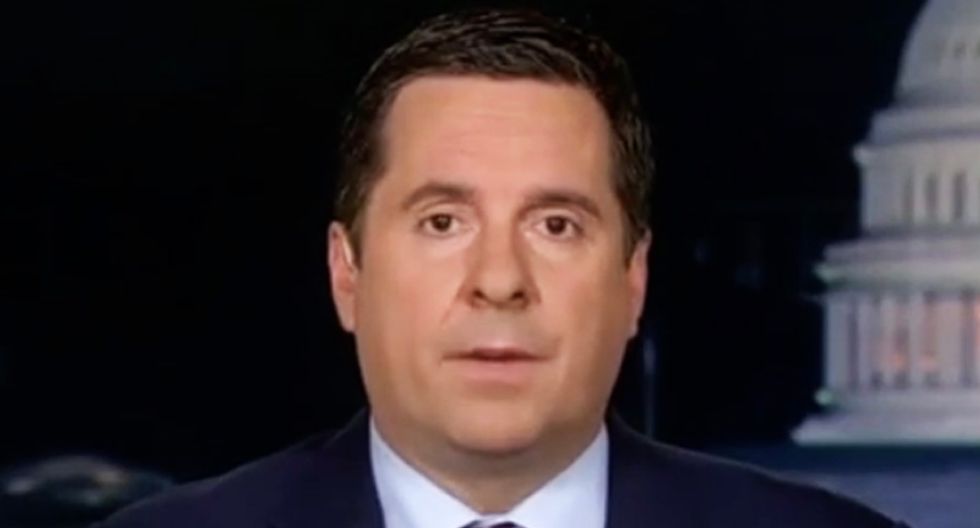 MSNBC's Mika Brzezinski ridiculed Rep. Devin Nunes (R-CA) on "Morning Joe" on Thursday morning after he awkwardly confessed he had more contacts with Rudy Giuliani associate Lev Parnas that he previously thought during an interview on Fox News on Wednesday night.

As Parnas further implicated Nunes during an interview with MSNBC's Rachel Maddow, Nunes sat down with Fox's Martha McCallum and stumbled about as he described calls he had with Parnas.

“If you recall, that [story] was brand new when that came out, when I came on your show,” Nunes said. “I just didn’t know the name, the name Parnas.”

Using that as her cue, Brzezinski, who earlier in the segment called Nunes "desperate" stated, "Wow. Lev Parnas telling Rachel Maddow last night he had met with Republican Congressman Devin Nunes a number of times."

"The ranking member of the House Intelligence Committee told Fox News last night that he now remembers speaking on the phone with indicted Giuliani associate Lev Parnas after previously claiming he couldn't recall having the conversation," she added with a smirk.

After sharing the clips, she added turned to MSNBC national security analyst Jeremy Bash, seemingly stunned by Nunes' performance and started with  a drawn-out and skeptical "Yeah," before asking, "Jeremy Bash, boom, boom, boom. That's it, it's done. What's your gut? "

"What is this guy talking about it?" Bash began. "Obviously, key question for Devin Nunes is if what the president did here was fine if it was upstanding if it was lawful, why are you so eager to cover it up? Why are you lying about it in plain sight? The question that needs to be posed directly to him."

"So I mean, Mika, underline one more time," co-host Willie Geist contributed. "Devin Nunes was ranking member of the Intelligence Committee running the impeachment trial, a guy at the middle of the case about which narrative he shaped from the very beginning of that hearing it's astounding as Lev Parnas said himself that Devin Nunes in the middle of the story was the ranking member overseeing that hearing with Rep. Adam Schiff (D-CA)."

"I am just -- there's not one way he didn't remember speaking to him. it's beyond inappropriate, it's incredible," Brzezinski added.