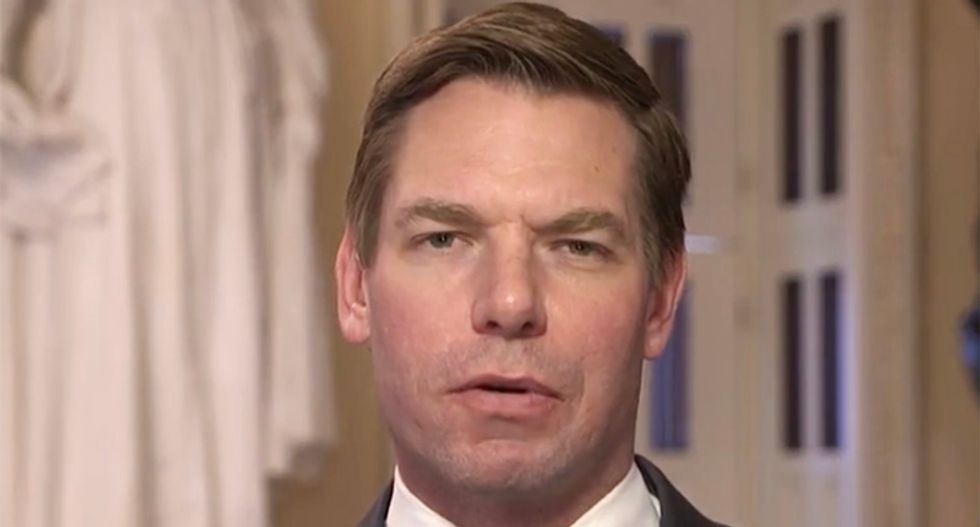 During Pompeo's press conference he was pressed by CBS's Paula Reid and, after he refused to elaborate by only offering that the government didn’t know precisely how the threat would pan out, Pompeo was grilled by the reporter who told him, "That’s not the definition of ‘imminent'."

"You were briefed in a classified setting and, since the president put this out there and Mike Pompeo has said that the threat was two embassies, did they tell you there was a threat to U.S. embassies in your briefing?" host Bolduan asked.

"No, it is not confusing to me, Kate, so I can't go into specific details," Swalwell began. "What I can tell you is consistently, in the multiple briefings I received intel on this they have not shown imminence. But they have also now consistently shown is that the president, whether it is on Russia, Ukraine or Iran, with this recent Wall Street Journal reporting, puts his interests above America's interests."

"Mike Pompeo said you all were told about what he's laid out here. Let me play that for you," the CNN host remarked before running a clip from Pompeo's press conference.

"What you played earlier [a Fox News clip] with Mike Pompeo saying 'I can't say precisely when or where,' that aligns with the lack of evidence that I have seen consistently and every brief I received in last week. I've been briefed multiple times from multiple briefers on this," the lawmaker explained.

"I'll say that's not imminent then," Swalwell elaborated. "The justification was that this was an imminent attack. Imminent means now, that's what imminent means and they have not justified --."

"No," Swalwell said with a small smile. "Because that's also the definition of, you know, New Year's Eve. New Year's Eve 2020 is going to happen -- it is just 350 some odd days away. That's not imminent."

"That was the justification they gave, and it's not adding up now. And now, as the Wall Street Journal and others start to report, I fear this president acted out of his own political interests and jeopardized the national security of the United States, escalating the conflict," he added.