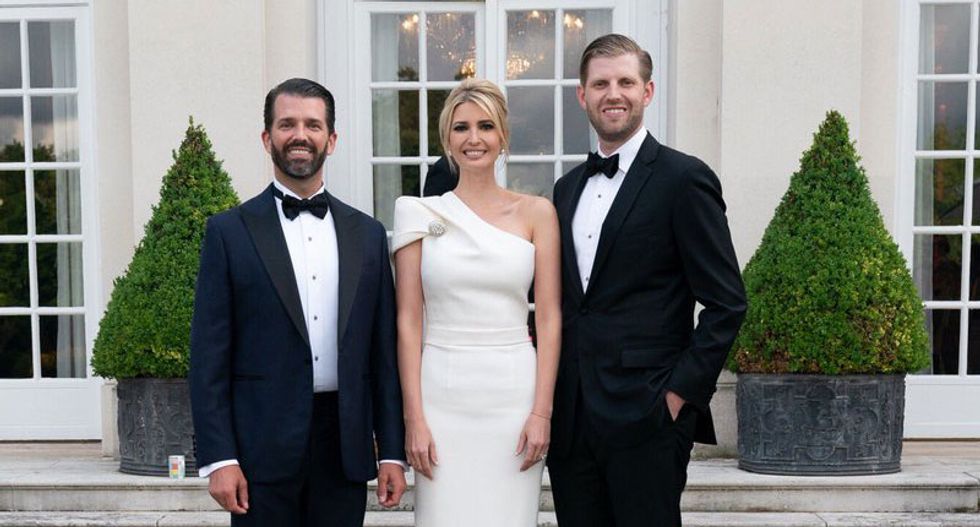 In his typically blunt fashion, Republican consultant Rick Wilson claims the U.S. will never be rid of the Trump family if the president survives his impeachment trial and is re-elected in 2020.

Getting right to the point in his Daily Beast column, Wilson writes, "Eight years of Trump sucks, right? It’s terrible, isn’t it? I mean, it can’t get worse, right? Right? Oh, you cockeyed optimists."

Adding, "If he wins in 2020, we’re never getting rid of these dolts," Wilson said the re-election of Trump will guarantee, "the rise of the Imperial Trumps, a family cult built on the remains of the moldering corpse of the GOP, featuring all the warmth of North Korea’s Kim dynasty and a kind of Hapsburg-jawed je ne sais dumbf*ck rien."

"Get ready for Donald Trump Jr., a man who speaks the fluent assh*le dialogue of the own-the-libs Trump Party, to rise to the top of the 2024 GOP primary ranks. The dynastic talk that was once treated as a joke (even by me) is already growing around both Don Jr. and Ivanka. Poor Eric is left out, but then again, he always has been," he continued.

As Wilson sees it, the Trump family has found a personal goldmine by inhabiting the Oval Office, allowing them to funnel money into the family coffers with no restraints -- least of all from fellow Republicans.

"The Trump family—including the creepy automaton Jared Kushner—will continue to view the American government not as a sacred trust but as an ATM for their crapulous enterprises and nation-state-level grifting," he wrote. "By the fall of 2019, it was clear that Trump had even managed to suborn the military into spending money that benefited his resorts and golf clubs when stories broke of Air Force cargo flights to the Middle East making unusual stops at his golf resort in Scotland for hotel accommodations and fuel."

"The ambition that drives the Trump spawn these days is powerful, and the corruption and collapse of the GOP as a party will enable their dynastic fantasies to play out with real consequences for the country. The Orange Kardashians will have the brand power of Trump, as well as the shameless hucksterism of Fox and the degraded conservative media, behind them," he continued. "Mark my words, even the “respectable” elements of the conservative media will soon be producing think pieces on why Don Jr. is the bridge from raw Trumpism to a smoother, smarter populist nationalism."

Wilson then took on each of the president's kids one at a time.

"Ivanka, though never accepted in Washington, still hopes to shape an image of the smart, Aspen- and TED-Talk-friendly modern technocrat who just happens to be the daughter of the warlord. I once had a 'serious journalist' with robust access to the Trumps tell me, 'She stops so many bad things. She’s a net positive.' Bro. Just because Ivanka calls you and says, 'I’m stopping bad things' doesn’t make it so, but like her father, she knows how easily duped the media can be. Her presence was deeply unwelcome at a number of events where she tried to run with the big dogs of world affairs, sparking an #UnwantedIvanka hashtag that ran wild on social media. She drew grumbles and cold shoulders from other world leaders offended that the adult child of a reality-star president was treating them as props in the drama of her personal ambitions."

The he turned his focus on Don Jr.

"Don Jr. might as well have a Pepe back tattoo, given how beloved he is by the alt-right and how frequently he boosts the social-media posts of the assorted race-war flotsam that follows his father," he explained. "He’s already teased about running for governor of New York or mayor of New York City, but a better bet will be a quickie relocation to Montana or some other state, at least nominally, before he launches his political career. Junior has spent a lot of time on the campaign trail and has learned the ropes. Expect to see him at the center of the Trump efforts in 2020 and as a constant presence on social media."

"Even Eric the Wide-Gummed and Tiffany have been dragged along for some of the high-profile state visits and glam events. Trump wants to maximize the reach of the brand, even for the children he loves the least. This is how real dynastic politics come to America, not with a bang but a reality show," he wrote, adding, "Yes, the Imperial Trumps are here to stay. Get ready for four years of the right-wing press writing strained profiles of the Strange New Respect that Ivanka is generating among conservatives, and how the first woman Republican president might not be Nikki Haley but rather the deceptively smart and successful fashion icon supermom Ivanka Trump, who is surprisingly down-to-earth. They’ll “discover” she has an easy, self-deprecating sense of humor."

"One other factor about the soon-to-be endless presence of Trumps in our lives: They’re breeding like rabbits, so if we don’t play our cards right now, they’ll have enough offspring to get a majority in the U.S. Senate before long," he concluded.