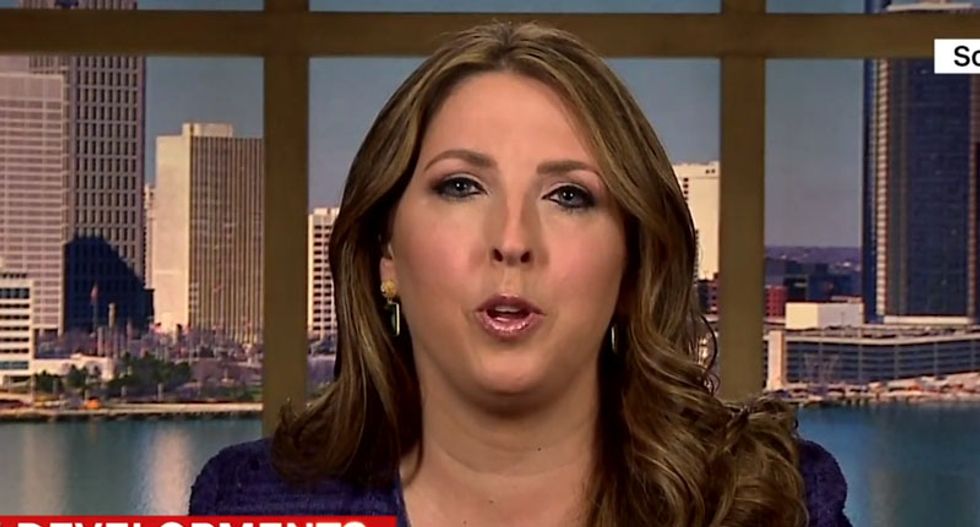 McDaniel disputed that analysis on "Fox & Friends" by claiming that Republicans had recruited a record number of women to run for Congress -- although she failed to note how many of them had even won their primaries, and she neglected to mention that head recruiter Rep. Susan Brooks (R-IN) will not seek re-election.

"I think this is fake news," McDaniel said. "(Rep.) Elise Stefanik (R-NY) had a great response to this. The House has recruited 181 women to run for Congress heading into 2020 -- it's a record."

"Why are Republican women lining up to run for Congress?" she added. "Because we have a message across this country that President Trump's policies have worked for them. Doubling the child tax credit, federal leave we have seen for workers, over half the new jobs, over 4 million jobs, have gone to women, and record low unemployment."

McDaniel, whose uncle is Sen. Mitt Romney (R-UT), then pointed to several other well-connected GOP women serving in the Trump administration, including the president's daughter and Senate Majority Leader Mitch McConnell's wife.

"While they keep pushing this narrative," McDaniel said, "they always ignore women that are leading the way in the Republican Party, like a Kellyanne Conway, like Ivanka Trump, like Elaine Chao, Gina Haspel, me being only the second woman ever to chair the RNC, raising record money. So I think that's a false headline, and women all over this country recognize that President Trump's policies are working for them."