'She's on the way to losing': Internet blasts 'snarling Trumpist' Martha McSally for flipping out on reporter and then doubling down on her insults 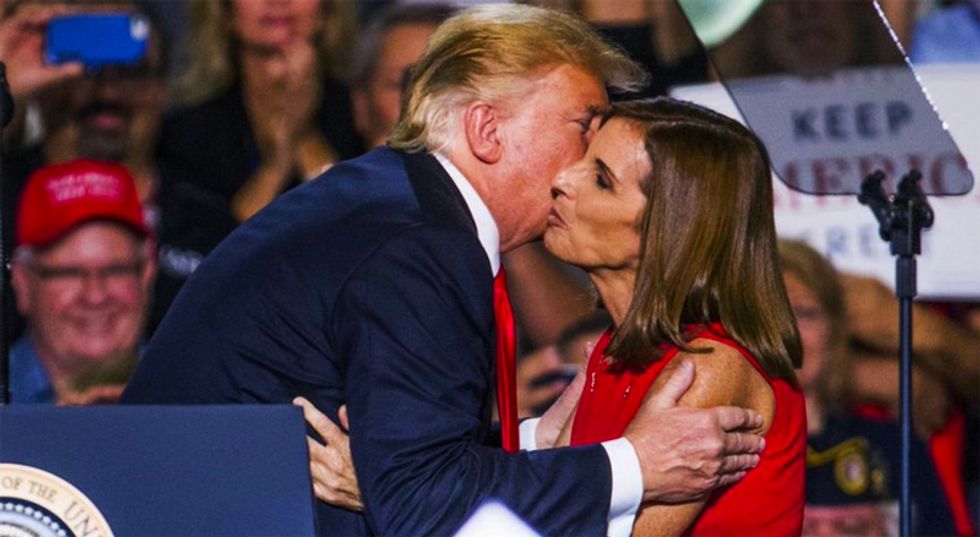 Instead of answering questions, or politely saying she can't talk at the moment, McSally attacked Raju as a "liberal hack" and stormed off. He was asking her if the new evidence should be included as part of the trial.

The moment was posted to Twitter by Raju and then retweeted by McSally, who, again, called Raju a liberal hack on Twitter.

McSally is in a difficult election race, where she's currently losing to astronaut Mark Kelly. She was appointed to her seat after losing the Senate race in Arizona in 2018.

It comes on the heels of Senators being given a flashcard with key phrases to use when trying to avoid reporters. Most of the things on the card involve the phrases "please excuse me," and explanations of why they need to rush away. "You're a liberal hack," doesn't appear. It's unknown why the Senate felt the need to print such cards and Senators were unfamiliar with ways to politely excuse themselves.

Senators have been given a flashcard with suggested phrases to use to avoid reporters, per @caitlinconant and… https://t.co/tMqvdzP4Y7
— Melissa Quinn (@Melissa Quinn)1579192823.0

You can see the mockery of McSally in the tweets below:

A strange answer to a great reporter asking a question that literally every senator si getting asked. Also: Not ho… https://t.co/uOXB1yjeFJ
— Jake Sherman (@Jake Sherman)1579189054.0

McSally is supposed to represent ALL of Arizona and take her job as an impeachment juror seriously-clearly she can'… https://t.co/QTkeDImFeh
— Amee Vanderpool (@Amee Vanderpool)1579190295.0

Weird how all the participation award haters never mention that Martha McSally was given a Senate seat after being… https://t.co/dMsWfX6fjN
— LOLGOP (@LOLGOP)1579191603.0

Remember when Martha McSally was hailed as a bipartisan hero when she curled up with her adorable golden retriever… https://t.co/1BqzdRPBrq
— Joan Walsh (@Joan Walsh)1579192561.0

Even if Raju were a “liberal hack”—which he isn’t!—the question is one that every reporter should be asking every s… https://t.co/kQjGQvrUIU
— Josh Chafetz (@Josh Chafetz)1579189461.0

how many people in US history have only served as US Senator for 2 yrs? McSally's going to join that very small… https://t.co/KCoUZYU1nO
— Eric Boehlert (@Eric Boehlert)1579190203.0

A simple, fair question that McSally should have answered but could have dodged politely if she wanted. The vast ma… https://t.co/8QE8Kk8JMx
— Kathryn Watson (@Kathryn Watson)1579191680.0

Instead of getting things done for Arizona voters, @SenMcSallyAZ is on Twitter name-calling and dodging accountabil… https://t.co/gFWiDwxLsE
— Swing Left (@Swing Left)1579188813.0

Good grief. McSally doesn’t even realize how bad she looks here. @mkraju is one of the best Hill reporters in Washi… https://t.co/CtDR3MsHag
— Heath Mayo (@Heath Mayo)1579190486.0

This is easily interpreted: Martha McSally is feeling the heat. She's getting pressured on Impeachment. She sees… https://t.co/O7YpSRIOhk
— TrumpsTaxes (@TrumpsTaxes)1579187497.0

This is pathetic. I used to like McSally as a veteran but she is just another cowardly Senator now forfeiting her o… https://t.co/XuYYsbXHc4
— Fred Wellman (@Fred Wellman)1579189129.0

Tells you a little something about how McSally views her re-election race, and the decision to moderate & play for… https://t.co/buIBSho0yd
— Garrett Haake (@Garrett Haake)1579186466.0