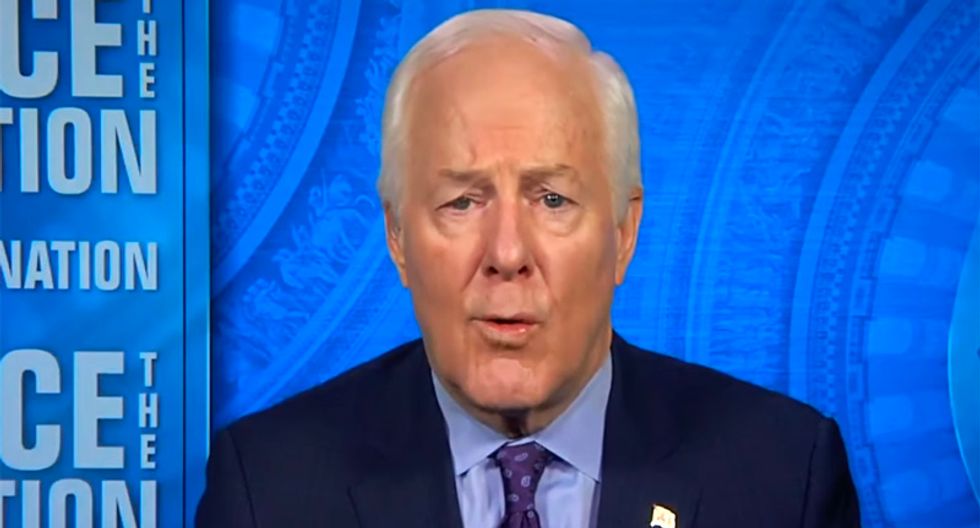 Appearing on CBS's “Face the Nation," Sen. John Cornyn (R-TX) attempted to blame Donald Trump's impeachment problems on "grifters" who found a way to attach themselves to the now-president when he began to run for president.

Speaking with host Margaret Brennan, Cornyn was asked about allegations made by Rudy Giuliani associate Lev Parnas that have implicated not only the president but Vice President Mike Pence and senior White House officials in an attempt to strongarm the leaders of Ukraine in return for military aid.

"Well, there is no question that there have been a series of grifters and other hangers-on that have associated themselves with the president's campaign or claim to have special relationships with the president, but this is not the issue that the Senate is going to be deciding," Cornyn said dismissively.

Pressed further on Trump's relationship with Rudy Giuliani, the Texas Republican called the former New York City mayor, "irrelevant" despite the fact that his actions in Ukraine spurred the president's impeachment by the House as well as the upcoming trial in the Senate.

“That's a relationship that causes some of us to sort of scratch our heads,” he explained. “But I'd say he's not relevant to the articles and what the Senate is going to be asked to do, impeaching a president for the third time in American history for a non-crime over events that never occurred.”