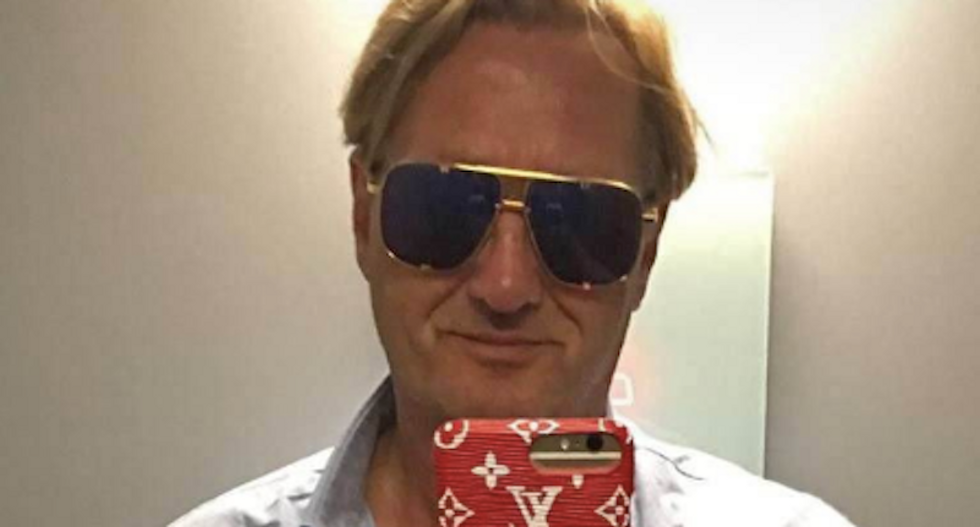 A Dutch superfan of President Donald Trump has been pretending to be a U.S. federal law enforcement officer and claimed to be starting up a tech surveillance company, according to newly revealed documents and interviews with associates.

Anthony de Caluwe first surfaced in the Ukraine saga after text messages released by House investigators showed him sending encrypted messages about former ambassador Marie Yovanovitch's movements in Kyiv, and NBC News has turned up new details about his shady past.

None of the photos show him with the president himself.

De Caluwe, who claims his texts about surveilling Yovanovitch were just "ridiculous banter" with a friend, often attacked the former Ukraine ambassador online -- and she was removed in March 2019, the same period he was sending cryptic texts to GOP congressional candidate Robert Hyde, who then passed along the information to Rudy Giuliani and his now-indicted associate Lev Parnas.

A half-dozen people who know de Caluwe told NBC News about his sketchy business interests, and two associates were concerned that his fanatical dedication to Trump could become a threat to the president.

Others say he made fantastical stories, especially after drinking, and sought investors for a number of too-good-to-be-true schemes.

Four people, including Hyde, told NBC News that he claimed to be working for the Drug Enforcement Administration, and he occasionally told others he worked for the FBI or CIA.

"He said he was with the DEA and all that, law enforcement," said Leland McKee, a Trump supporter and frequent Mar-A-Lago guest. "He was trying to solicit money from anyone he could get money from, and I knew there was something not quite right."

Photos show him wearing what appears to be a DEA badge, which he often flashed when introducing himself, and told others that his Dalmatian dog was a drug-sniffing police canine.

Impersonating a U.S. law enforcement officer is a violation of federal law, but none of the agencies commented on his claims about working for them.

No evidence at this point indicates that he was actually surveilling Yovanovitch, but the FBI has been sharing information with multiple foreign governments with de Caluwe -- who was romantically involved with a Ukrainian woman who regularly visits her home country.