Why the US is unlikely to go to war with Iran

The killing of Iranian general Qassem Soleimani by the United States — and Iran’s response — raises many important legal and strategic issues.

Was the killing legal under international laws regarding the use of force? Given the Iranian missile strikes that came on Jan. 7, how will President Donald Trump respond? How will NATO member countries respond to the U.S. president’s request to be more involved in the Middle East?

Most importantly, will tensions between the U.S. and Iran boil over into war? It is possible, but not likely.

The legality of the U.S. strike

Soleimani was a member of the Islamic Revolutionary Guard Corps (IRGC), a branch of the Iranian armed forces, and leader of the Quds Force. The Quds Force is responsible for IRGC operations outside of Iranian territory such as recruiting and training forces to fight against the U.S. in other countries in the Middle East.

The U.S. claims the Quds Force is responsible for high profile terrorist attacks in the region, including the killing of five U.S. soldiers in Karbala in 2007. As such, the U.S. has designated the IRGC as a terrorist organization.

Over the past several months the Iranians have shot down a U.S. surveillance drone over the Strait of Hormuz, seized a British oil tanker and bombed Saudi oil infrastructure. On Dec. 27, Kataib Hezbollah killed a U.S. contractor and injured several U.S. and Iraqi military personal in a rocket attack near a U.S. base in the Iraqi province of Kirkuk. The U.S. Embassy in Baghdad was overrun by crowds protesting the American airstrikes that were in response to that killing.

Given this pattern of behaviour, Iran should have expected some type of U.S. response. In a statement issued by the U.S. Department of Defense, the justification given for killing Soleimani was that he was “… actively developing plans to attack American diplomats and service members in Iraq and throughout the region.” This phrasing is important because it implies that the killing was an act of self-defence on the part of the U.S.

Article 2(4) of the Charter of the United Nations states:

“All members shall refrain in their international relations from the threat or use of force against the territorial integrity or political independence of any state, or in any other manner inconsistent with the Purpose of the United Nations.”

One important exception to this rule, though, is self-defence. Article 51 states:

“Nothing in the present Charter shall impair the inherent right on individual or collective self-defence if an armed attack occurs against a Member of the United Nations.”

Soleimani’s status as a combatant

The important issue here is Soleimani’s status. On the one hand, the U.S. has designated the IRGC a terrorist organization. This could possibly allow for his killing under the 2001 Authorization of the Use of Military Force (AUMF). But the AUMF is tied specifically to the 9/11 terrorist attacks, so basing the legality of the drone strike on this is sketchy at best.

There is also the Support for Special Operations to Combat Terrorism law, but this is about funding other states in support of U.S. efforts to fight terrorism and not about the use of force per se. 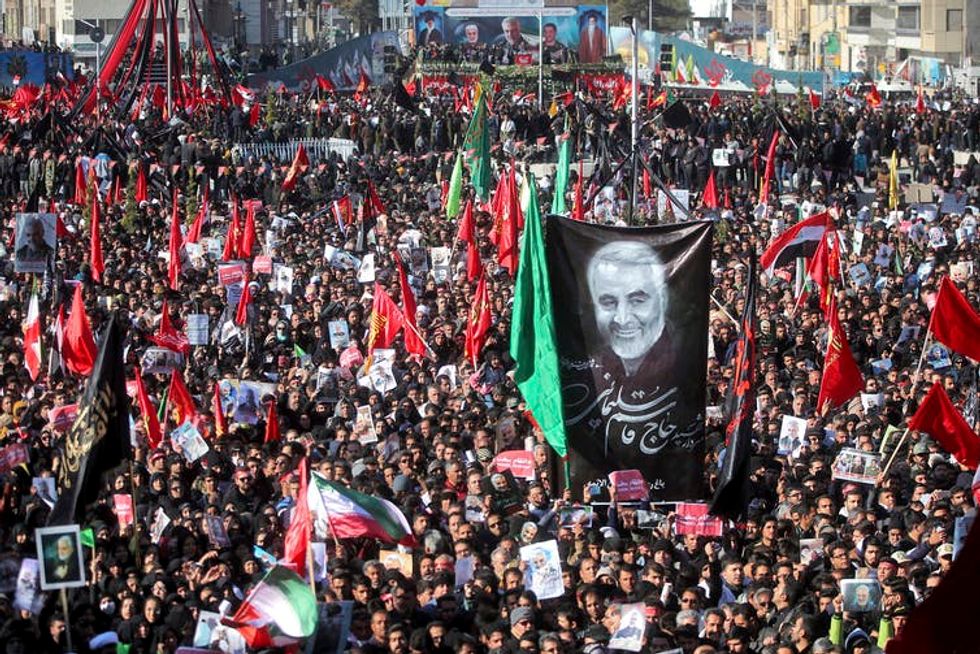 Mourners attend a funeral ceremony in the Iranian city of Kerman for Qassem Soleimani and his comrades who were killed in Iraq in a U.S. drone strike on Jan. 7, 2020.

On the other hand, Soleimani was the member of the military of a UN member state. As such, claiming that Soleimani was “actively developing plans” implies the U.S. reasoning behind the killing is that it was a legitimate use of force — in self-defence — against Iran. Given Iranian actions over the past several months, this explanation seems somewhat more plausible.

While one can debate the legality of the drone strike under laws regarding the use of force in the international system, the strategic implications seems clearer. Trump and the national security team he has assembled are not the people I would have chosen to deal with, whatever the Iranian response might be.

It appears the drone strike was ordered without the consultation of U.S. allies. Indeed, several news outlets have reported that members of the U.S. Defense Department were caught off guard by the president’s go-ahead of the attack. This should be worrisome to U.S. allies. One of those allies, Canada, has suspended its military operations in Iraq in response to the Soleimani killing.

The missile attacks by the Iranians on the Ain al-Asad air base in western Iraq’s Anbar province and a base in Erbib did not kill any U.S. service personnel — most likely by design. As Trump’s news conference the day after the missile attacks showed, this allows the U.S. to de-escalate the situation while still being able to claim a victory.

War is always a possibility due to misperceptions of the other’s intentions by both sides. However, the Iranian regime wants to preserve itself in power and, therefore, does not want to be fighting U.S. forces on its own soil. This does not mean tensions in the region will end anytime soon though.