Anti-Trump conservatives have given up battling the president out of greedy self-interest: report 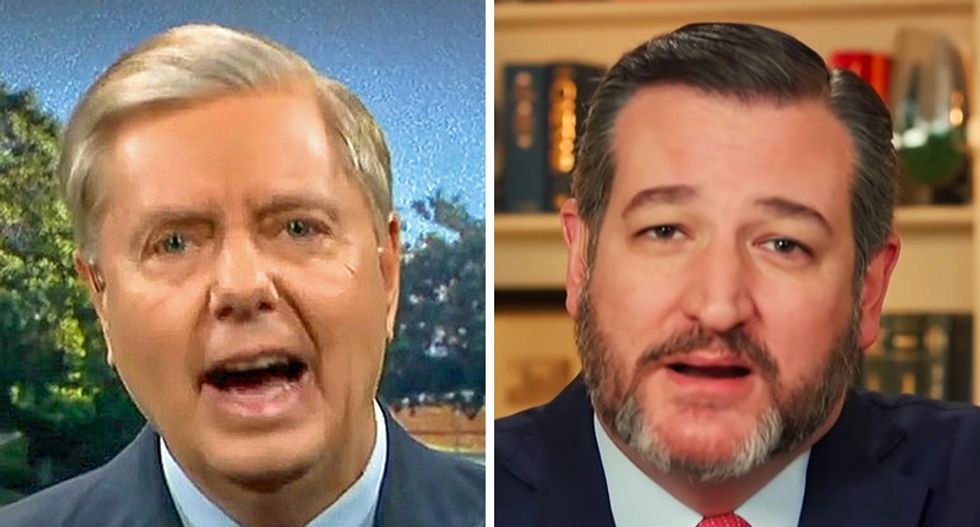 According to a report from the New York Times, Republican lawmakers who once disparaged Donald Trump in blunt terms have given up now that it appears they may be saddled with him if he survives impeachment and the 2020 election.

It was not so long ago that Republican Sens. Lindsey Graham of South Carolina and Ted Cruz of Texas "frequently raised alarm over the prospect of Mr. Trump in the White House. Mr. Cruz even shied away from endorsing him at the party’s nominating convention," the report states before adding, "Both paid a price in Twitter abuse from the president, and both are now among his most ardent defenders."

"After Mr. Trump’s election, other senators — in private and public settings — said they were concerned about the president’s fitness for office and his Twitter rants against his critics and rivals. Senators split on a few issues and did not show the same fierce loyalty of Republican House members," the Times notes before adding that was then and this is now as Republicans leaped at the chance to keep the president in office instead of handing the reins over to Vice President Mike Pence.

Of particular note is the fact that new GOP senators are tending to be more conservative than their predecessors and are quickly allying themselves with Trump.

"Senator Kelly Loeffler of Georgia, the newest member of the Senate through her recent appointment, attacked Senator Mitt Romney of Utah, her fellow Republican, on Twitter for trying to 'appease the left' by backing the idea of witnesses," the report notes. "Her clear aim was to curry favor with Mr. Trump and she may well have scored a success. But it was hard to imagine a freshly minted senator of the past arriving in Washington and almost immediately questioning the motives and views of a more senior senator who was also the former presidential nominee of her own party — after making significant campaign contributions to him in the past."

"It is worth noting that Ms. Loeffler was appointed to fill the seat of the ailing Johnny Isakson, a Republican known for his bipartisan approach in the Senate and his love and respect for the institution," the report states. "The departures of [Senator John] McCain and Mr. Isakson are just part of the steady loss of members willing to go their own way when it comes to the president. Outgoing senators are often replaced by much more conservative successors who have attached themselves to the president."

That is a bad trend warns former Republican Senator John Warner who wrote this week, "Not long ago, senators of both major parties always worked to accommodate fellow colleagues with different points of view to arrive at outcomes that would best serve the nation’s interests,” before adding that not calling witnesses in the impeachment trial of Trump, would do “lasting damage to the Senate, and to our fragile national consensus.”