Giuliani slammed by Joe Manchin over his ongoing Ukraine antics: 'Rudy is absolutely horrible for our country' 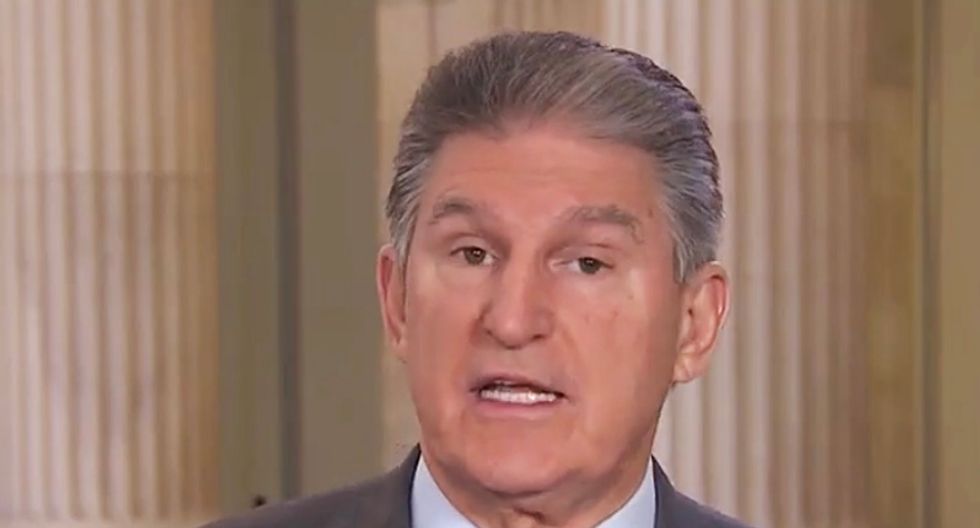 Appearing on CNN's "New Day" to respond to Donald Trump's Twitter diatribes against him, Sen. Joe Manchin (D-WV) brushed aside the president's name-calling and urged him to "act like a responsible adult," but saved his ire for Trump attorney Rudy Giuliani.

Speaking with host John Berman, Manchin -- who claimed he was Trump's best chance to get bipartisan support for any of his initiatives -- was asked by the CNN host about being referred to by the president as "Munchkin."

"I like the president, I just love my country and I'm going to do what's right for the country," Manchin stated after explaining at how he arrived at his vote to convict the president of impeachable crimes.

"You still like him? He called you 'Munchkin,'" host Berman pressed.

"That doesn't bother me -- names don't," the senator replied. "I'm not going to call him names. I have respect for the president. I want my president to do well. He's still my president and I want him to do well and succeed."

"You respect that behavior?" Berman asked.

"I don't respect it. I expect every American and myself, like my president, to act like a responsible adult and he's not. for the sake of the country, I hope he does," Manchin explained.

Asked about Giuliani's "shadow diplomacy" that appears to center on digging up dirt on possible Trump presidential opponent Joe Biden, Manchin said it should be against the law.

Specifically addressing South Carolina Republican Sen. Lindsey Graham contention that Giuliani is funneling Ukraine information directly to Attorney General Bill Barr, Manchin stated, "It should be outlawed. It should be against the laws of the American people and the Constitution."

"You shouldn't have the president, executive branch or any branch use rogue proxies that aren't beholden to the people, that don't answer to the people. They go out there and use the power of an office, whether it's a senator's office or president's office saying, 'I'm speaking on behalf of so-and-so,'" he insisted. "That person or myself or the president calls and says, 'Hey, if Rudy shows up, I want you to work with him.' That's a lot of pressure on people and that's not who we are and it should not be done, should not be tolerated."

"I'm going to see if we can get bipartisan legislation that prevents any of us from ever abusing our power," he stated before adding, "Rudy is absolutely horrible for our country."