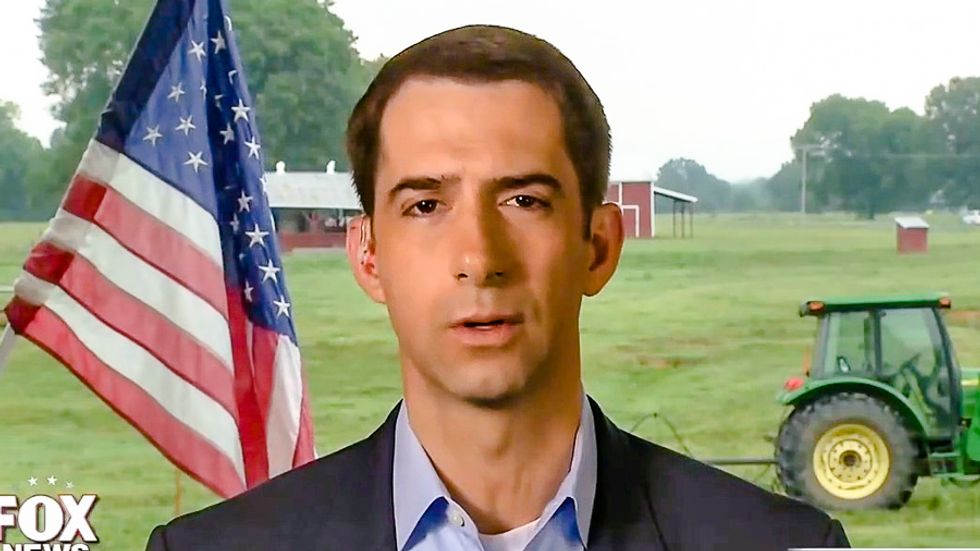 In a column for the Washington Post, conservative Jennifer Rubin expressed disgust with Ivy League-educated Republican lawmakers who have descended into anti-intellectual "know-nothingism" in an effort to parrot whatever the GOP is trying to sell to their most rabid supporters.

Following up on comments made by Sen. Tom Cotton (R-AR) on Fox News where he implied that the coronavirus was concocted by Chinese scientists at the Wuhan National Biosafety Laboratory, which has been strongly disputed by health experts ("In response to Cotton’s remarks, as well as in previous interviews with The Washington Post, numerous experts dismissed the possibility the coronavirus may be man-made"), the columnist got right to the point.

"When Ivy League-educated, formerly sane politicians spew conspiracy theories, debunked talking points and contempt for science, the question often arises: Do they believe this nonsense (i.e. have they become thickheaded by listening to Rush Limbaugh and watching all that Fox News?), or are they cynical purveyors of claptrap designed to woo unsophisticated voters?" she asked.

In the case of Cotton, Rubin suggested that that would appear to be the case since he should know better.

"This is unadulterated nonsense, one step removed from anti-vaxxer rubbish and UFO-spotting," she charged.

According to Rubin, Cotton's conspiracy-mongering is nothing new for Republicans who have long courted "mostly white, non-college-educated men who attribute their loss of prestige and status to 'elites,' especially those in colleges and the media."

"Even right-wingers who should know better have felt compelled to pander to audiences that wear ignorance and anti-intellectualism as a badge of honor," Rubin accused. "With Trump, the resort to lies, conspiracies and propaganda has become a matter of political survival for the ambitious right-wingers. Trump’s authoritarian contempt for truth sets the tone, forcing military hawks such as Cotton to remain mum when Trump dismisses traumatic brain injuries as 'headaches' and former Cold Warriors such as Sen. Ted Cruz (R-Tex.) to parrot Russian propaganda on Ukraine."

Rubin went on to note that Trump has made such blathering even more acceptable with his fact-free diatribes that have ramped up attacks on the scientific community -- and the US government -- as part of his populist pitch.

"Trump has merged the know-nothingism of right-wing populism with a far more dangerous intellectual evolution from defense of limited-government conservatism, which was formerly at the heart of modern conservatism, to outright worship of authoritarianism," she explained. "Now, far too many conservatives have reverence for executive power and reject constitutional government."

The columnist then took Cotton -- and Sen. Ted Cruz (R-TX) -- to task for selling themselves as Ivy League-educated and then cynically pandering to the lowest common denominator with falsehoods that validate their distorted worldviews.

"In all of this, the Tom Cottons and Ted Cruzes who used to fancy themselves as intellectuals and originalist scholars have chosen to simply go with the flow," she wrote. "Too ambitious to endanger a future in a party they imagine will be permanently deformed by Trump, and too cowardly to defy the willful ignorance of their peers, voters and political universe (including right-wing think tanks, publications and advocacy groups), they now pride themselves on their willingness to adopt non-factual conspiracy theories — no matter what the public safety or constitutional implications might be."