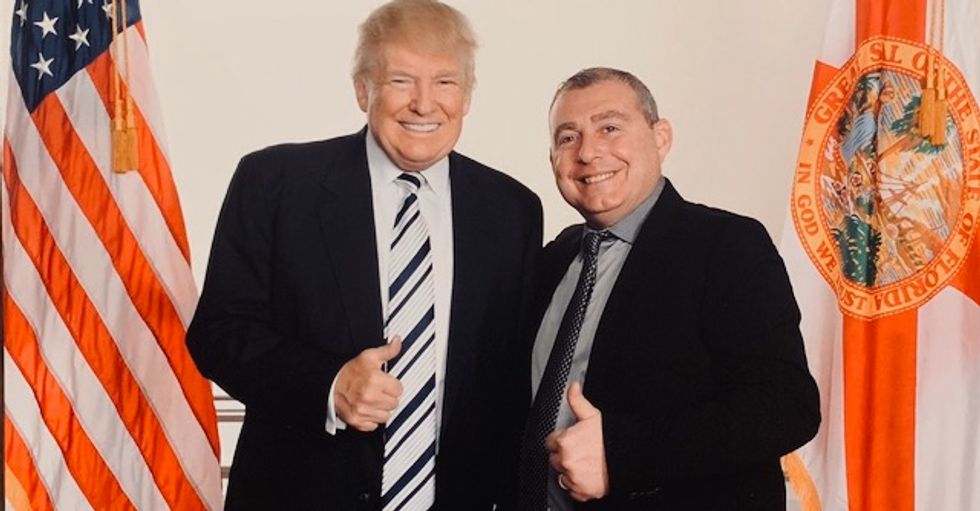 Lev Parnas and Igor Fruman have attained notoriety for their parts in the Ukraine mess. They’re both Soviet-born U.S. citizens who worked closely with the president’s personal lawyer, Rudy Giuliani, serving as emissaries in the campaign to oust then-U.S. Ambassador Marie Yovanovitch and press Ukraine’s government to investigate Joe Biden’s son.

But Parnas and Fruman also exemplify the shattering of norms when it comes to the influence of big money in politics during the administration of President Donald Trump — and that’s the subject of this week’s episode of “Trump, Inc”.

Parnas and Fruman have since been indicted by federal prosecutors in New York for, among other things, acting on behalf of one or more Ukrainian officials who wanted the U.S. ambassador removed, and funneling money from a Russian businessman into campaigns in Nevada while concealing the source of the funds. The men have pleaded not guilty.

At first glance, the indictments seem to show that potential campaign abuses are being effectively policed. But the “Trump, Inc.” episode shows just the opposite: The events came to light because of an improbable, almost random, series of events and at least one key slip-up.

Parnas and Fruman’s successful attempt to use money to win access to the president wasn’t brought to light by prosecutors. Or by the federal agency set up specifically to enforce the laws governing money in politics. It was uncovered by a few watchdogs responding to a question from a reporter and using Google Translate to decipher Russian-language articles published in Ukraine. “The only reason that we know about Parnas and Fruman is that they weren’t sophisticated donors,” said Robert Maguire, the research director at Citizens for Responsibility and Ethics in Washington.

The process began with a question. In a newsletter he wrote, reporter Lachlan Markay of The Daily Beast wondered about a $325,000 donation to the pro-Trump America First PAC attributed to an entity he’d never heard of called Global Energy Producers. Could anybody, he asked his readers, tell him anything about it?

That piqued the curiosity of Brendan Fischer, the director of the federal reform program at the elections watchdog group Campaign Legal Center. He noted the size of the donation, which represented 6.5% of what the America First PAC had taken in that quarter. He asked a researcher-investigator at the center, Maggie Christ, to begin digging.

Christ learned that Global Energy Producers was a Delaware LLC formed only five weeks before. There was no sign it was an operating business or had any assets. As is typical, the Delaware LLC’s address revealed nothing.

But Christ noticed a second address. It turned out to be the Boca Raton, Florida, home of a man named Lev Parnas. (Suffice it to say that most people who set up an LLC that shields their identity choose to leave their home address off the documents they file. Parnas’ lawyer declined to be interviewed.)

Christ had never heard of Parnas. He was a cipher online; he’d never been covered by the news, as far as Christ could discern. “Fruman and Parnas had no public footprints at that point,” she said. “They were just not public figures at all. So we were pretty confused as to what their motivations might have been.”

Christ kept pulling threads. Using Google Translate, she was able to read some Russian-language articles that had appeared in Ukraine, one of which described Fruman as a “channel of direct communication between the Jewish community of Kiev and the President of the United States.” From there she found indications that Parnas and Fruman had been at a dinner with the president as well as a photo of Fruman at Mar-a-Lago with Trump.

Suspicious, the Campaign Legal Center decided to file a complaint with the Federal Election Commission charging that Global Energy Producers was a front for an unnamed donor — which, the organization contended, would violate U.S. election laws.

The complaint generated more information. A lawyer in Florida representing a family claiming to be owed money by Parnas — an investment years ago in a movie called “Anatomy of an Assassin,” which the man asserted Parnas never repaid — contacted the Campaign Legal Center. That lawyer was then able to subpoena bank and wire transfer records. The resulting documents revealed that Global Energy Producers hadn’t donated the $325,000 to the America First PAC; a different shell company, this one owned by Parnas and wife, had actually contributed the money.

That only increased the suspicions, and ultimately federal prosecutors echoed the Campaign Legal Center’s assertions in their indictment, while also adding the allegation that Parnas and Fruman were acting on behalf of “at least one foreign official — a Ukrainian government official who sought the dismissal of the U.S. ambassador to Ukraine.”

What became of the complaint to the FEC? The agency isn’t allowed to say what, if anything, it’s doing in response to the complaint (though the FEC would typically step aside when prosecutors file criminal charges that parallel an FEC investigation).

But even if the FEC wanted to take action, it couldn’t. The agency no longer has the minimum number of commissioners legally required to bring an enforcement action, effectively making the agency impotent. And even before that, according to Commissioner Ellen Weintraub, a Democratic appointee, the agency had succumbed to total paralysis. What was once a partisan divide at the agency, she said, had turned into a dispute over whether the very notion of enforcing election laws has merit. It no longer matters, she said, whether the potential target of an investigation is a Republican or a Democrat.

As Weintraub put it: “So Republicans have voted over and over again not to enforce the law, not to investigate, not to pursue allegations against Democrats. And Democratic commissioners have, on the other hand, voted to pursue them. So most, most recently, we had a case alleging a multimillion dollar coordination scheme between a super PAC and the Hillary Clinton campaign. And I voted to pursue the investigation and the Republicans blocked it. And this has happened — this scenario — has happened over and over and over again.” (The two other sitting FEC commissioners, both Republican appointees, declined to be interviewed.)

To hear the full story, listen to “Trump, Inc.” And if you’d like to get involved and do your own campaign sleuthing, you can read more here.

And finally, you can use the postal service:

“Trump, Inc.” is a production of WNYC Studios and ProPublica. Support our work by visiting donate.propublica.org or by becoming a supporting member of WNYC. Subscribe here or wherever you get your podcasts.