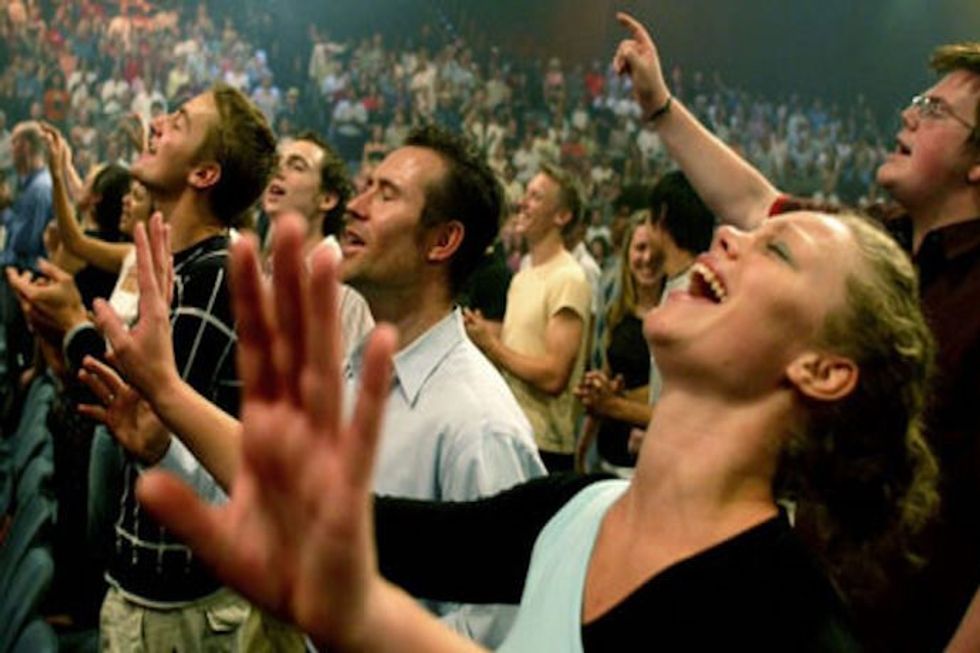 A smidge under a half-dozen items at the intersection of religion and politics for your enjoyment and edification. - eds

1. Let's start with a question often asked: will white evangelicals stick with Pres. Trump in 2020? The answer, despite some high-profile dissension, remains a solid "yes":

For the time being, the real estate mogul-turned-president has little to fear. According to a recent poll conducted by the Public Religion Research Institute (PRRI), 77 percent of white evangelical Republicans approve of the job Trump is doing at the White House.

A crushing 98[%] majority of them are opposed to his impeachment and removal from office.

It's fair to ask how a man whose personal life is so at odds with evangelical morality can be so adored by them. The short answer is: privilege. As Robert Jones points out in The End of White Christian America, white Christians no longer hold a majority the US, and some of them want their hegemony back. You can see this play out in a number of ways in the headlines.

2. There's a specific desire to maintain the hegemony of conservative social practices, leading Trump to appear at the March For Life, the first president ever to have done so. The effort appears to have paid off, with marchers shouting things like "four more years" and "we love you."

3. Though Democrats overwhelmingly favor reproductive rights, they are by no means immune to trolling by some of their putative "pro-life" voters, as Pete Buttigieg discovered in Iowa:

On Jan. 26, Ms. Day bluntly asked the candidate if he were willing to accept the support of “people like me” in the upcoming campaign, reviving the party’s big tent approach on the divisive issue.

“I’m not going to try to earn your vote by tricking you,” the former mayor of South Bend, Ind., told her. “I am pro-choice, and I believe that a woman ought to be able to make that decision.

“The best I can offer is that if we can’t agree on where to draw the line, the next best thing we can do is agree on who should draw the line. And in my view, it’s the woman who’s faced with that decision in her own life.” His response was quickly memed and circulated by his campaign on social media, where some described Ms. Day’s engagement with the candidate as an ambush of Mr. Buttigieg, a characterization she disputed.

“No, it absolutely was not an ambush,” Ms. Day said. “His campaign had plenty of time to talk to me in advance about these issues. We’ve been reaching out…since mid-December and trying to set up meetings to talk about it because there are a lot of pro-life Democrats who thought that he would be a good candidate to support.” That meeting never occurred, she said.

“I didn’t ask about his position on abortion. I asked him: ‘Do you want the pro-life-Democrat vote? And I guess the answer was ‘no.’”

This is pretty good example of a long-standing grift run by Democrats for Life of America and other groups like the Susan B. Anthony List. It runs like so: demand that Democrats accommodate your disagreement on a core principal, and when they unsurprisingly demur, claim victimization, pout that this is why Dems can never win—all evidence to the contrary be damned—and use the ginned-up controversy to raise funds.

Somehow, this supposed horde of pro-life Democrats, like their supposedly persuadable Republican counterparts, never does show up. Yet Ms. Day and others like her assume the privilege of deference to their dissenting views. And privilege it is to be so focused on a single issue that for its sake alone you'd be happy to tear down the party you nominally belong to—and the one thing that stands between Donald Trump and a second term.

4. Speaking of which, it takes a special kind of Christian to defend a president as corrupt as Donald John Trump. And by "special" I mean, "possibly also corrupt." Ladies and gentlemen, I present to you Jay Sekulow:

Jay Sekulow, one of President Donald Trump's lead attorneys during the impeachment trial, is being paid for his legal work through a rented $80-a-month mailbox a block away from the White House.

But Sekulow, 63, is registered as chief counsel at the American Center for Law and Justice, a non-profit Christian legal advocacy group based in an expansive Capitol Hill row house a short walk from the Senate chamber.

The Associated Press reviewed 10 years of tax returns for the ACLJ and other charities tied to Sekulow, which are released to the public under federal law. The records from 2008 to 2017, the most recent year available, show that more than $65 million in charitable funds were paid to Sekulow, his wife, his sons, his brother, his sister-in-law, his nephew and corporations they own.

Sekulow, who made his bones defending the rights of Jews for Jesus, LaRouchies, anti-abortion zealots, and other assorted god-botherers to bother other people, while also sweeping stacks of cash from under various rugs to others, has also long been a Republican operator, rumored to have helped Chief Justice John Roberts onto the Supreme Court, among other things.

But as I say, his reputation primarily stems from defending (well) clients who want to proclaim conservative Christian messages in the public square. Behind those messages lies the belief that conservative Christians have been unfairly marginalized in civil discourse by evil atheists like Madalyn Murray O'Hair, a secular educational and political establishment, and liberal traitors to the true faith like my own United Church of Christ.

Conservative Christians have lost their hegemony, in other words, and they want it back. Sekulow's not a great lawyer, as you can see from his performance in Trump's impeachment trial, but he has been able to ride the desire to regain lost privilege all the way to a fat bank account.

5. There are limits to how far one can run with an act like this, however. Franklin Graham—son of Billy and president of the large evangelical charity Samaritan's Purse—has never been as grifty a customer as Sekulow. But he's been no less a culture warrior for conservative evangelicals, and no less a stout defender of Pres. Trump. This does not sit well with everyone:

The Billy Graham Evangelistic Association is looking for venues in London and Liverpool for Franklin Graham’s upcoming UK tour.

Management of ACC Liverpool said Jan. 24 that it was dropping plans to host a June 12 Graham event, citing a number of statements by the evangelist “which we consider to be incompatible with our values.”

Lest you think this is strictly a Brit thing, the same article notes that Graham has also been met with protests in Florida. He's taken the news in typical stride:

In a statement to Newsweek Jan. 28, Graham said he believes he is facing discrimination because of his religious beliefs. “It is wrong for venue managers and local officials to make a decision that disadvantages Christians,” he said.

By which, of course, he means "people who think like me."

A federal judge has ordered Proud Boy Charles Donohoe, who is indicted along with three other members of the nationalist gang for conspiracy to disrupt the electoral college certification, to remain in detention as he awaits trial.

Judge Timothy Kelly noted during a detention hearing on Tuesday that government evidence that Donohoe carried a riot shield that was stolen by fellow Proud Boy Dominic Pezzola and later used by Pezzola to shatter a Capitol window, allowing rioters to stream through.