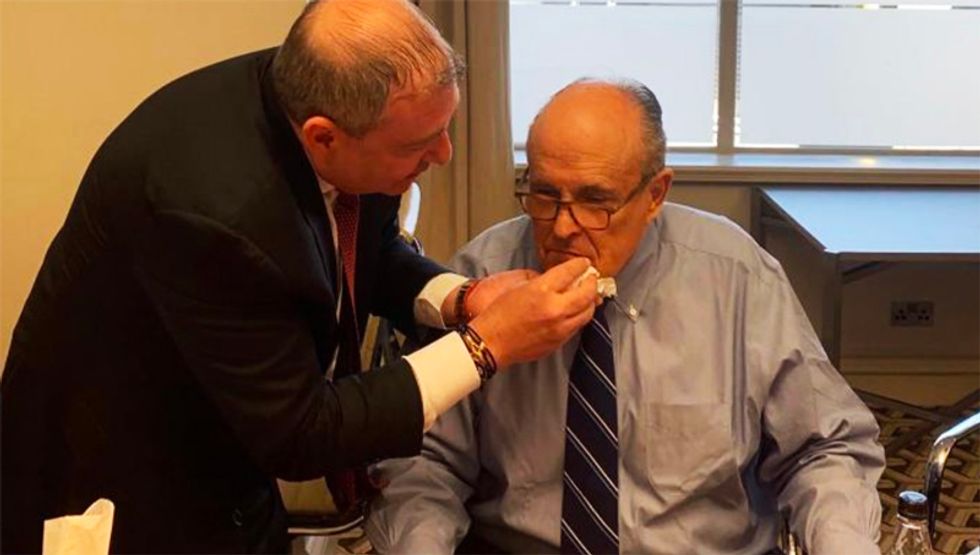 According to a report from CNN's Vicky Ward, former Rudy Giuliani associate Lev Parnas has handed Democratic investigators a treasure trove of previously unseen photographs and videos that bear out his contention that he was working closely with Donald Trump's attorney despite disavowals.

The report notes, "Stored in devices seized from Lev Parnas by law enforcement, there's a 34-second cell phone video of Rudy Giuliani relishing a bullfight. There are also photos of Donald Trump's personal attorney posing with two matadors, a flamenco dancer twirling her skirt and an image of the father of Venezuela's opposition leader beside a tray of hors d'oeuvres on the lawn of a Spanish castle."

"The videos and photographs of Giuliani's trip to Spain, obtained exclusively by CNN, show the efforts Parnas went through to document and save a trove of information. They have aided a slow-drip campaign by Parnas' legal team to keep the indicted Giuliani associate in the limelight as he builds a defense for his indictment, and could plague Giuliani—and ultimately the President—well after impeachment has passed," Ward wrote.

According to Parnas' attorney Joseph Bondy, his client "possesses an unseen stash of photographs and recordings. Those exist in addition to the notes, text messages and other evidence that is currently in the hands of Congress."

Speaking with CNN, Bondy stated, "Over the past several months, it has been revealed that Lev Parnas is a prolific collector of photos and video. Contrary to what one might expect, Mr. Parnas has not destroyed any. Rather, he has preserved them. The universe of subject matter is yet to be publicly revealed but is of interest in matters well beyond the impeachment inquiry."

Videos and photographs of Rudy Giuliani and his associate Lev Parnas on a trip to Spain, obtained exclusively by CN… https://t.co/jwEXUlz3an
— CNN Newsroom (@CNN Newsroom)1581091313.0