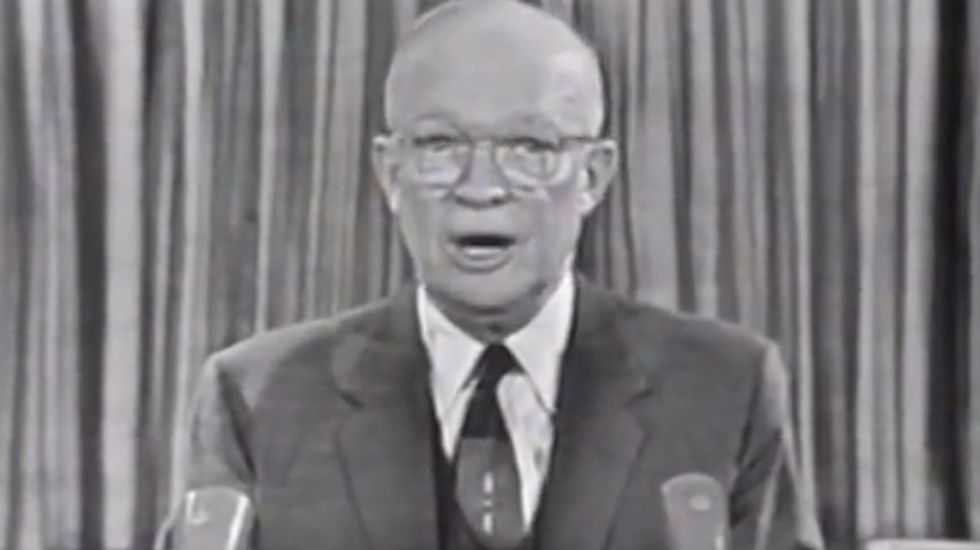 If it is difficult to calculate the impact that a single primary can have on the trajectory of a nation, it was even harder to gauge a primary’s significance before the 1970s, when their results were so loosely tied to how candidates were nominated at party conventions. So it’s important to consider those old contests with a pound of salt, from the initial foray as the first-in-the-nation primary 100 years ago in 1920, to the Granite State’s notably unique primary in 1952.

Shaping the course of history

At this point in 1952, incumbent President Harry Truman was on the fence about seeking another term, and other big-name Dems were unwilling to succeed his increasingly unpopular presidency. After deriding the contest’s significance, though, Truman entered his name into the New Hampshire primary.

At the same time, Dwight Eisenhower was extremely popular across the political spectrum. Truman had attempted to recruit the former Allied Forces general to run as a Democrat, but Eisenhower declined, feeling more aligned with the Republicans despite never having held elected office.

Meanwhile, the frontrunner for the GOP nomination was Robert A. Taft, an ardent conservative who ran in staunch opposition to the New Deal and supported a more isolationist foreign policy.

“Tiny New Hampshire is normally little more than a speck on the politicians’ map of the U.S.,” Time wrote before the primary. “But last week politicians and pundits from coast to coast were carefully adjusting their fine tuning to get a good, 21-in. view of what is going on there. On March 11, New Hampshire will have the first presidential preference primary of 1952.”

Tennessee Sen. Estes Kefauver, a coonskin cap-donning progressive populist famous for campaigning on the back of a dogsled, defeated Truman with nearly 55% of the vote. Less than a month later, Truman formally declined an opportunity to seek the party’s nomination.

On the Republican side, Eisenhower coasted to victory, beating Taft by 25 points.

Kefauver went on to win 12 of the 15 primaries in 1952. But that didn’t help him at the Democratic National Convention in Chicago, where Illinois Gov. Adlai Stevenson was recruited and nominated, despite not winning a single primary.

Taft and Eisenhower went on to split most of the remaining primaries. Following a “bitterly divided convention,” Eisenhower narrowly emerged as the nominee. With Richard Nixon as his running mate, the general went on to crush Stevenson in the general election.

Less than four years after winning reelection in the biggest landslide in American history, President Lyndon B. Johnson’s presidency was sputtering out of control.

The popularity of his ambitious “Great Society” domestic agenda was being bogged down by large-scale race riots at home and an increasingly unpopular war in Vietnam. By the time of the New Hampshire primary, close to 1,000 Americans were being killed in Vietnam every month.

Six months after John F. Kennedy’s assassination, Johnson enjoyed approval ratings as high as 75%. By 1968, they had plummeted into the 30s.

Despite an emerging energized left, there was little support for unseating Johnson from the Democratic establishment. Until New Hampshire …

Minnesota Sen. Eugene McCarthy emerged as the president’s lone challenger early in the Democratic primaries. Running on an anti-war platform, McCarthy captured youth support, and invested much of his campaign’s resources on New Hampshire.

The student-led ground game in the Granite State took the region (and the political world) by storm.

With the nomination process traditionally driven by party machines and dealmakers, turning the first primary state into a ground zero for an antiwar grassroots movement reimagined the function of electoral politics in America.

Activist Sam Brown worked as the top youth coordinator for the McCarthy campaign. In The War Within by Tom Wells, Brown said working on the campaign gave him “an opportunity and gave an excuse to walk up to people’s doors and say, ‘Hi. I’m Sam Brown. I’m here because I’d like to talk to you about the war in Vietnam—and about Gene McCarthy.’”

The result was a defeat on paper. But McCarthy’s strong showing—securing 42% of the vote—elevated his status as a viable candidate. More significantly, it opened the floodgates of doubt over Johnson’s status.

Days later, Bobby Kennedy, then a senator from New York, joined the field against the incumbent. On March 31, less than a month after the close result in New Hampshire, Johnson declared in a televised address that, given the turmoil both domestically and abroad, “I shall not seek, and I will not accept, the nomination of my party for another term as your president.”

McCarthy and Kennedy went on to run a spirited campaign, splitting most of the 12 remaining states holding primaries in 1968. But the election process was tragically upended at the campaign’s end, when Kennedy was assassinated by Sirhan Sirhan after his win in California.

A legendarily chaotic and violent convention in Chicago ended with the Democratic Party nominating Vice President Hubert Humphrey, who had stayed out of the primary process altogether. Humphrey then lost a narrow general election to Eisenhower’s former VP Richard Nixon.

Dawn of a realignment

If any standout moment forecast the modern Republican Party’s lunge to the right, it was the 1992 New Hampshire primary. It was the first time in the modern political alignment that an elected Republican president faced a challenger from his own party, putting establishment conservatism on trial at a time of economic instability.

President George H.W. Bush had enjoyed strong approval ratings through most of his first three years in office. But by the fall of 1991, those numbers began to plummet. At the same time, Bush faced a conservative backlash for famously soiling his 1988 campaign pledge of “no new taxes.”

Pat Buchanan launched his political career as a writer and adviser for Richard Nixon, devising his “silent majority” strategy to win over working-class voters uneasy with a radicalizing counterculture on the left. He developed his right-wing credentials as a conservative commentator in the years after his political work.

In late 1991, Buchanan announced a challenge to Bush.

“My friends, we come to New Hampshire at a crossroads in our country’s history,” Buchanan said. “[Bush] is yesterday and we are tomorrow. He is a globalist and we are nationalists. He believes in some Pax Universalis; we believe in the Old Republic. He would put American’s wealth and power at the service of some vague New World Order; we will put America first.”

But Bush campaigned hard in New Hampshire, and surrogate Arnold Schwarzenegger even managed to insert a cheesy swipe at the challenger, asking voters to “send a message to Pat Buchanan: Hasta la vista, baby.”

After strong early results for the insurgent, Bush held on for a close win. But only after Buchanan managed a respectable 38% of the vote.

In the Democratic primary, meanwhile, Bill Clinton overcame rumors of an extramarital affair to run a strong second to Massachusetts Sen. Paul Tsongas. Clinton went on to win the nomination with ease.

Buchanan never outperformed his New Hampshire showing, but he continued to run a respectably distant second through the primaries, finishing with close to 3 million votes.

Buchanan endorsed Bush, and gave a hard-right repudiation of his Democratic opponent at the Republican convention in Houston.

This article was produced by the Boston Institute for Nonprofit Journalism as part of its Manchester Divided coverage of political activity around New Hampshire’s first-in-the-nation primary. Follow our coverage @BINJreports on Twitter and at binjonline.org/manchesterdivided, and if you want to see more citizens agenda-driven reporting you can contribute at givetobinj.org.

A new report from Politico claims that "paranoia is gripping parts of" former President Donald Trump's inner circle after an insider apparently spilled the beans about classified documents being stashed away at Mar-a-Lago.

According to Politico, Trump allies have bandied about theories that "that the FBI doctored evidence to support its search warrant — and then planted some incriminating materials and recording devices at Mar-a-Lago for good measure."

A new MAGA: Mothers Against Greg Abbott mobilizes against the incumbent governor seeking a third term

A little over a year ago, Nancy Thompson, an Austin mother of three kids, stood alone for two and half hours in front of the Texas Capitol with a sign that said “Mothers Against Greg Abbott.”

She was most upset about the governor’s ban on mask mandates, worried about her son who was medically vulnerable to COVID-19 after being hospitalized for another virus that had “infected all his organs,” she said.

On Tuesday afternoon, far-right news outlet Real America's Voice dedicated a nearly 20-minute segment of its talk show "Water Cooler" to a novel explanation of Monday night's FBI raid on Mar-a-Lago, Donald Trump's Palm Beach resort and home. While many Trump allies in the Republican Party and conservative media have competed to voice the most vehement denunciation of the search — Rep. Paul Gosar of Arizona called to "destroy" the "democrat brown shirts known as the FBI," Rep. Marjorie Taylor Greene of Georgia suggested that the raid might portend "civil war" and Florida state Rep. Anthony Sabatini said state leaders should arrest FBI agents "upon sight" — RAV managed to find a bigger villain yet.

"I'll just tee it up this way: Jeffrey Epstein. Pedophiles. Trump. Deep State," said host David Brody, co-author of a biography of Trump, before handing the reins over to his colleague Anna Perez, a former Newsmax employee who now hosts her own RAV show, "Common Sense." Perez went on to make a lengthy case that the raid was tied to the claims of the repeatedly debunked conspiracy theory QAnon, which argues, against all evidence, that Democratic politicians, Hollywood celebrities and other elites are part of a satanic and cannibalistic child sex abuse ring that only Trump can defeat.