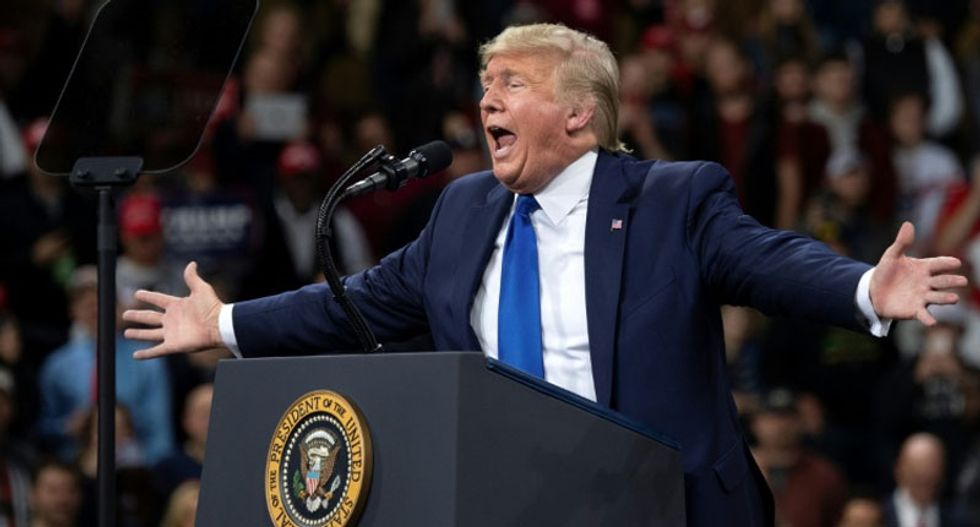 The disturbing, divisive undercurrents of the impeachment continue to ripple through our political, investigative and legal systems.

Even as voters were going to primary polls in New Hampshire, Team Trump was in overdrive to push the powers of the Donald Trump presidency exactly into the kind of abuse that has driven the efforts to unseat him.

From all the on-the-street interviews in New Hampshire, the key figure was not Bernie Sanders, the narrow winner, or Mayor Pete or the surging Amy Klobuchar. The key figure was Donald Trump, whose removal from office Democratic primary voters identified over and over as the reason they were turning out.

It made for remarkably split television screens with elections on one side, and another Team Trump attempt to undercut democracy on the other.

As if voters needed a new reason, Donald Trump showed he is interfering in a live federal criminal case – in a trampling of any remaining bright line meant to separate pursuit of politics and administration of law in this country. Trump is seeking to lighten federal sentencing for his campaign ally Roger Stone through Atty. Gen. William P.  Barr moving to undercut what prosecutors seek as punishment.

It is another breach of constitutional limits.

It was not enough for Trump to win an acquittal vote in the Senate: Trump wants the record expunged that he ever was questioned. And yes, he wants heads on pikes, now, and continuing through the year.

It turns out that the most American of values is insistence on being right, even if it means continuing to flay at horses already declared dead multiple times over.

For the White House, post-impeachment clearly means opening all channels for revenge against anyone who dares to question Donald Trump’s bad behavior in the Ukraine scandal, and prompting Trump allies, including Sen. Lindsey Graham (R-S.C.) and the attorney general to go after those it perceives can justify Trump’s rogue campaigns.

The hypocritical thing here is that Team Trump’s efforts depend exactly on the same kind of complaints about unjustified or poorly predicated investigation for which Trump sees himself and his associates as witch hunt victims.  But then, they see the shoe on the other foot. . .

Graham and Barr now say  the Justice Department is ready to review any purported evidence from Rudy Giuliani–hinting that there is enough from various ousted Ukrainian leaders to suggest there is a corruption case to pursue, years later, against Joe Biden, son Hunter and Burisma, the Ukraine energy company that hired Hunter for a no-show job on its board. At the same time, each is trying to ensure that the process is important because the info may be hooey.

Meanwhile, at least two Republican-majority Senate committees are threatening investigations on FISA-violation issues that already have been pursued by the Justice inspector general, even as they promise to out the original whistleblower who first reported Trump’s interest in personal gain in the Ukraine.

At the same time, Democrats are already talking about continuing to investigate every unanswered aspects of the impeachment matters, with information from Lev Parnas, Giuliani’s henchman, and former national security adviser John R. Bolton still arriving and continuing to suggest a longer, broader Trump retributive campaign than outlined even in the impeachment charges.

And all of this has nothing to do with Trump’s tax information, his apparent business frauds, outstanding campaign finance violations, allegations from women about assaults and all the other issues his presidency has raised. It has little to do even with continuing to stiff Congressional calls for information to oversee his administration. If Trump wins in November, we can look forward to four more years on both sides.

There is a lot that is confusing in all this, including whether any voters actually care. The daily political play by play seems to suggest only that American voters have returned to their opposing corners, so sure in their beliefs and loyalties as to not be persuaded by anything the other side has to say.

On the legal front, it is confusing that Rudy Giuliani, who is reportedly under investigation himself for various overseas violations, has a front door to Barr, to deliver materials that others, including Secretary of State Mike Pompeo and Ukrainian officials, have just set to one side as useless. Even as he was announcing that Barr would now be accepting these documents, Senator Graham insisted that they may all be Russian-influenced hoax documents.

If so, what are we doing, besides carrying out exactly what Trump wanted in the first place–the announcement that someone was investigating the Bidens, even if there is no actual investigation.

Other than Burisma and Hunter Biden having made the appearance of a spectacularly bad decisions with worse coincidental timing, what are we saying here? On behalf of a slew of European nations, Joe Biden, then vice-president, was calling for more investigation in the Ukraine against corruption, not less, including involvement of companies like Burisma. If Joe Biden brought an aura of ickiness to his office, what does this possibly have to do with the case of Trump running a rogue foreign policy through Giuliani in the Ukraine for personal political gain?

But in doing so, Barr has announced separately that only he can decide whether there will be any investigation of presidential candidates this year. Given the Trump defense arguments in the impeachment proceedings, what does that do to any “investigations” by the Senate? Given that Barr has established himself as a defender for Trump himself in all things. What happens next, when Biden claims the same “blanket immunity” for his time in office that apparently justified non-cooperation with the House during the impeachment process? Is Barr stepping into investigations already under way in the Southern District of New York involving Parnas and Giuliani?

Then there is the political case in all this.  Joe Biden is dying slowly all by himself, without particular help from any involvement in the Ukrainian scandals. As we are hearing endlessly in too-easy political pundit judgment on television, Biden’s poor finishes in the (disastrously run) Iowa caucuses and the New Hampshire primary, are a downward spiral for his candidacy.

So, what’s the confusion here?

The call for more investigations here seems aimed at embarrassment, not at uncovering information. The Senate soundly rejected the chance to hear from more witnesses lest that information further indict the malfeasance of a president who sees no boundary between public and private concerns, between political gain and some vague notion that he can do anything he wants in the Oval Office.

The legal set-up is confusing because there is no clear goal by any of the players, and the ethical land mines make clarity next to impossible.

The moral case, by contrast, is very clear and very divided. Half the country thinks it is nuts that Trump can go around dismissing experienced national security employees whom he personally dislikes, and the other half calls that draining the swamp.

And as a practical matter, most people would rather re-argue the Oscars or count how many days until spring baseball.