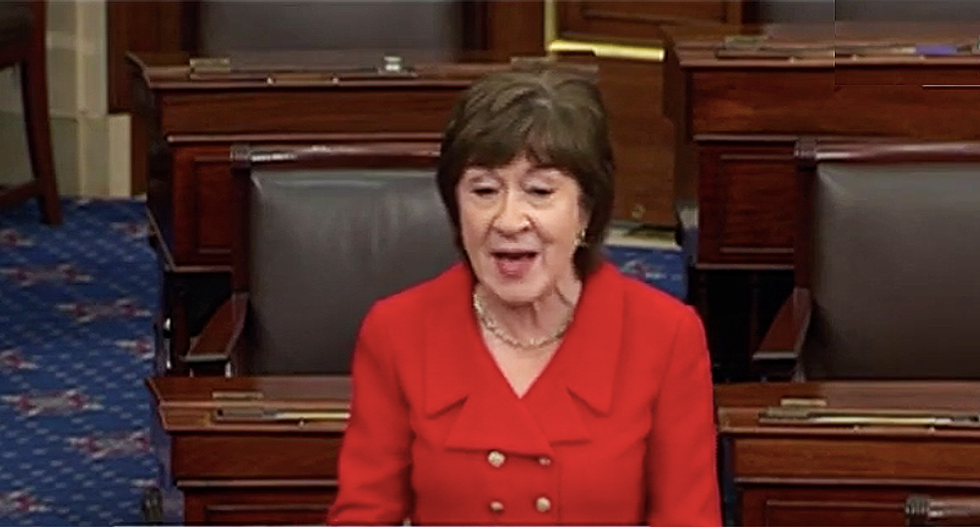 Speaking on the floor of the Senate Tuesday, Collins explained that she voted to acquit former President Bill Clinton, but recalled she thought at the time that House Republicans proved that he broke the law. She didn't believe lying about a sex act met the threshold for impeachment, however.

In 2020, an international conspiracy to undermine a political opponent, however, also doesn't meet the standard for removal from office.

While she acknowledged that Trump exercised "poor judgment" by demanding Ukraine announce an investigation of former Vice President Joe Biden, it wasn't an action unbefitting the United States presidency, she said.

Sen. Lisa Murkowski (R-AK) similarly had a convoluted explanation for her acquittal. In a fumbled speech, she called “the president's behavior was shameful and wrong." She also refused to vote to convict.

Murkowski even went so far as to lie that people are already casting ballots for president in 2020. Not general election ballots have been cast as the primary elections aren't even over. While Murkowski was making the allegation, the Iowa Caucus hadn't even started.

Watch Collins in the video below: