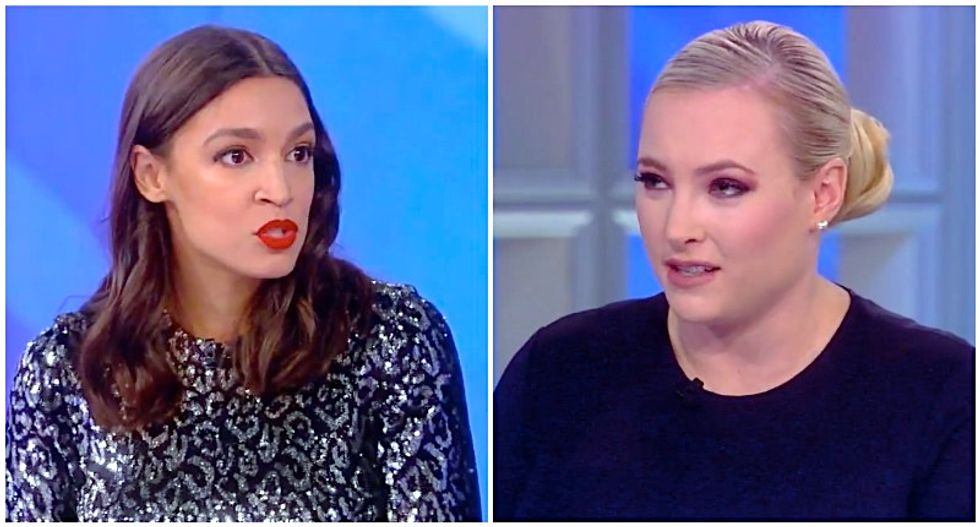 "The View" co-host Meghan McCain challenged Rep. Alexandria Ocasio-Cortez (D-NY) to defend her socialist policies, and the audience roared in approval as she laid them out.

The New York Democrat appeared Wednesday on the daytime talk show, and McCain compared herself to the first-year lawmaker.

"I feel like you're the bogeywoman of the right and I'm the bogeywoman of the left, so it's interesting to be talking to you," McCain said. "Because what you're proposing and what Bernie Sanders is proposing, you said Fox was, like, ushering in the apocalypse to conservatives like me that think big government is very dangerous, it is like the apocalypse. It's not just that Bernie is asking a lot of voters to buy into what I consider radical ideas like the Green New Deal, Medicare for All, he's advocating for a complete paradigm shift of the American system as we know it, and it's a huge ask for people like me and it's a huge ask for a lot of people, the seismic shift from capitalism to socialism."

McCain claimed that polls showed 45 percent of Americans would not vote for a socialist, while she said many Republicans would consider voting for Joe Biden or another moderate Democrat over President Donald Trump.

"When you poll these abstract ideas, it's one thing," Ocasio-Cortez replied, "but the majority of Americans would vote for Bernie Sanders and that's because of his record, his commitment and his policies, but also, I think, you know, I think there's one story that's not really being told here is what's actually happening on the ground in America."

Ocasio-Cortez pointed out that about 60 percent of Americans made less than $40,000 a year, and she said that wasn't enough money to live in New York and many other places.

"You can barely live on that anywhere," she said. "You can't live on that if you have kids. I think that that reality, personally, does require a paradigm shift. This isn't working for us. A $2.1 trillion tax cut which has been deemed capitalism at its finest doesn't work for us."