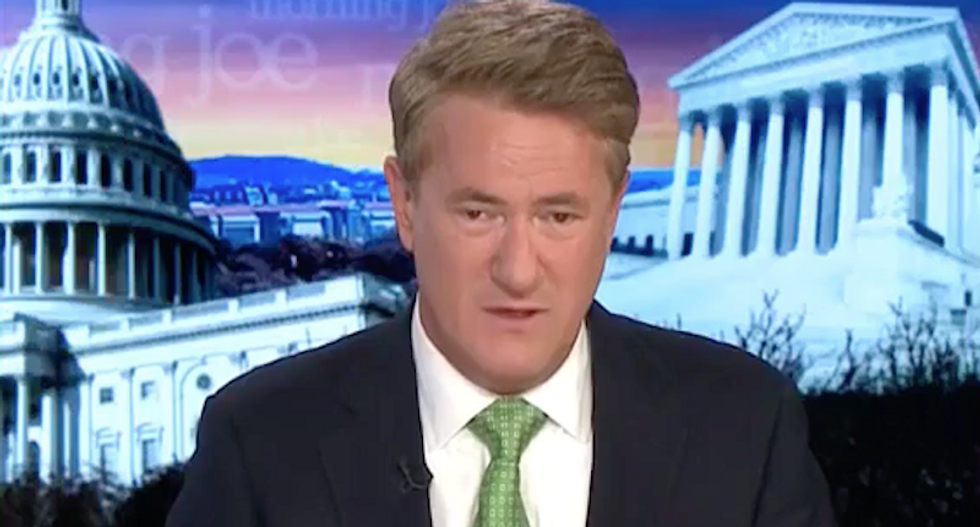 The "Morning Joe" host praised President Donald Trump for finally seeming to understand the severity of the threat from the coronavirus, which could deliver grave and unknowable consequences to the nation in the coming months.

"It was a sobering report that was delivered this weekend -- 2 million, up to 2 million Americans could die from the coronavirus," Scarborough said. "That's actually, think about it, more Americans than died in World War I, World War II, Vietnam and the Civil War combined. It is a staggering number."

"The same thing happened in Great Britain, where they reversed course after finding out their models yesterday would lead to 250,000 British citizens dying," he added. "So there was, without a doubt, an awakening there. The White House is unusually focused and frightened about what is coming."

Scarborough said he spoke to high-ranking officials who told him the situation was going to get very bad, and it would require a staggering level of commitment from the government and the populace to fight back.

"This isn't like 9/11, this is like World War II," Scarborough said. "It is going to change the way we live as Americans, and the atmosphere inside the White House was very sober. As I hear the president yesterday talking about voluntary measures, and then suggesting they may have to lock down so-called hot spots, I was thinking, that's actually the best way to go at first. Because we Americans might not respond as well, certainly not as well as, let's say, people in China, people in Singapore, to federal government locking things down. It is going region by region, state by state, locality by locality."

Meacham agreed that the policies would likely get more draconian, and he expanded on Scarborough's comparison to World War II.

"The analogy I keep thinking of is less about America during World War II, because though we mobilized, we did it very late," he said. "Obviously, after Pearl Harbor and Germany declared war on us, 16 million Americans served, 11 percent of the male population, 2 million in Europe. There were victory gardens, and there was a full mobilization."

"I think this is more like England and Britain during World War II," Meacham added. "Civilians are actually combatants, if you will, if you followed the analogy. Everybody was at the front, right? Churchill said in the great 'finest hour' speech, you know, let us so conduct ourselves that if the British empire were to last 1,000 years, men will still say, this was their finest hour. He needed everybody because Germany was dropping bombs on everybody. Where we're living right now, the Luftwaffe is overhead in the form of a pandemic. It requires, dare I say it, Churchill-like leadership."

"Yesterday was marginally better," Meacham said. "It was like Lucy and the football with the federal government the last three years. Whenever you think things are moving in the right direction, they end up not. That's not a political partisan point, it's just an observation about the nature of public leadership. The other Churchill line that I think is really important here is he once said, 'There's no worse mistake in public leadership than holding out false hopes, soon to be swept away.'"

"To go directly to your question, I think you go hard at this, clean it up later," he added. "If you go soft and you have even more people dying, that's irreversible."