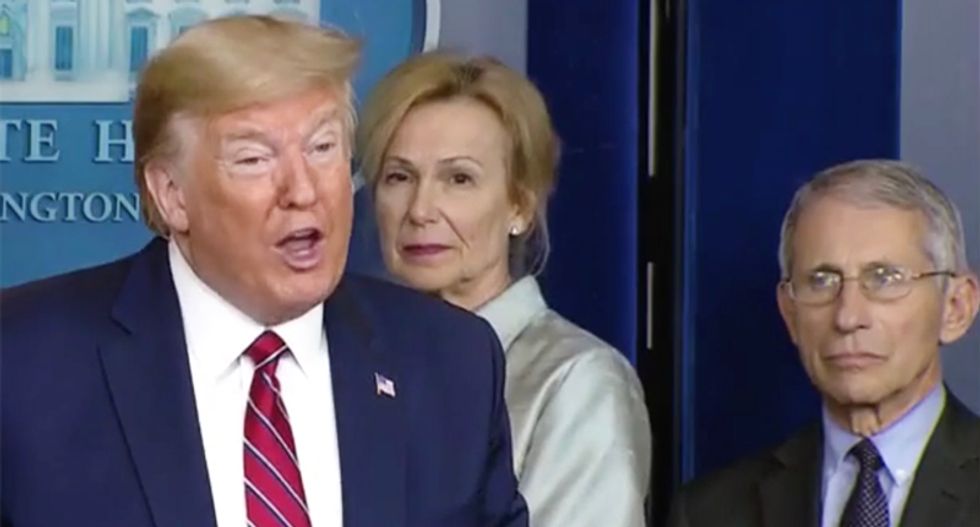 In a sarcastic, and yet deeply serious column for Vanity Fair, an ex-FBI hostage negotiator suggested that the only two experts that Donald Trump appears to be listening to as the country has been brought to a standstill by the coronavirus pandemic are themselves hostages to the president's whims.

Written as an open letter to Drs. Anthony Fauci and Deborah Birx, widely regarded as the two most trusted members of the White House task force dealing with the health crisis, Frank Figliuzzi began, "If you are reading this, you are now entering your third month as members of President Donald Trump’s coronavirus task force. As you attempt to infuse presidential decision-making with medical and scientific knowledge, those of us who have experienced successful hostage resolution .... are seeing some uncanny comparisons to siege scenarios. In order for all of us to survive the next month and beyond, you’ll both need to understand how similar your predicament is to a hostage standoff, and how you can employ kidnap and ransom negotiation techniques to overcome the challenges of your figurative captivity."

The ex-FBI man made the point that, at this time, the president needs the doctors and their expertise -- which has a soothing effect on the country -- more than they need him and they should keep that in mind when dealing with him and getting what they need to do their jobs.

"First, successful hostage negotiators must understand the kidnapper’s motivation. In most kidnappings, the captor wants money, but publicity, political demands, and yes, even ego, can drive ransom demands. This means that you both retain your value if you can remain alive; in your case that means not being kicked off the task force," he explained. "Since the president has kept you in place thus far, he seems to understand that he needs you around, even if he’s growing weary of your incessant talk of science and epidemiological modeling."

"This mutually dependent dynamic gives you the leverage and influence needed to shape outcomes. You control what the president wants: public adulation, credit for mitigating a deadly virus, and the appearance that he understands complex medical concepts," he elaborated. "You must delicately and subtly message the president that if he harms the hostages (you and us), he won’t get what he wants."

However, he warned, the unpredictable Trump could change his mind at any time if he sees progress and wants to speed up the normalization process, so they should specify a "point man' to engage the president.

"Two physicians coming at the president at once won’t work," he advised. "The communicator must present a previously agreed upon message but maintain limited authority. In other words, let’s say you select Dr. Birx (the president seems to view her as less of a threat). Dr. Birx should already secretly know what Dr. Fauci’s position on things is, but when negotiating with the president, should always say, 'Let me make sure we have Dr. Fauci’s opinion,' or, 'I’ll have to get back to you after I consult the team.'"

"This allows for the negotiator to establish a requirement for what hostage negotiators call a reasonable delay. In life or death hostage crises, reasonable delays can make the difference between the abductor doing something rash and emotional, or doing the right thing," he explained.

With that he advised the two doctors to put their heads together and have a plan to save not only their own reputations -- but the country.