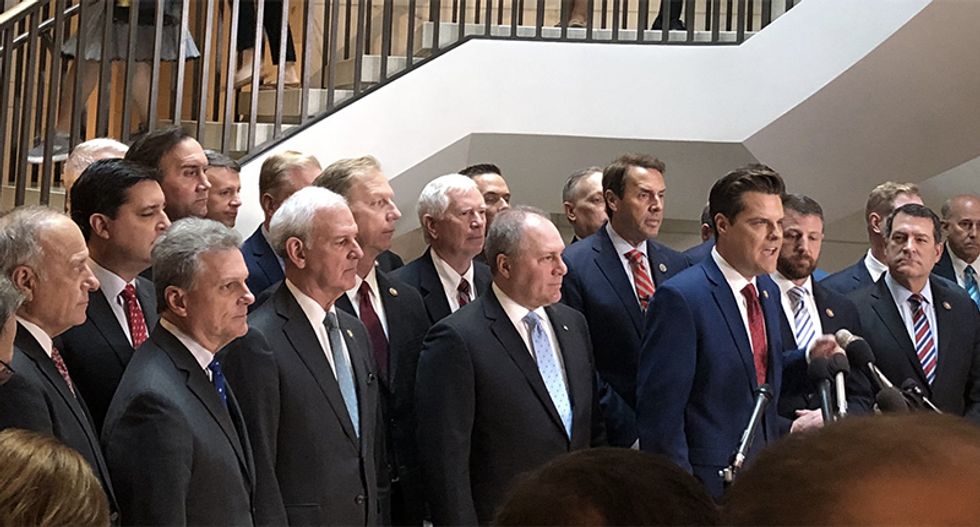 In a blistering column for the Daily Beast, conservative Matt Lewis ripped into the Republican Party for demonstrating it really does stand for putting profits before people if its response to the coronavirus pandemic is any indication.

According to the author of "Too Dumb to Fail: How the GOP Went from the Party of Reagan to the Party of Trump," the GOP has joined the president's "death cult."

Starting with a blunt, "In the last 24 hours, it has become clear that, despite warnings from experts like Dr. Fauci, Donald Trump is willing to sacrifice lives to try and save the economy and his chances for re-election," Lewis suggested Republicans are not only backing the president -- they're proudly and publically embracing it.

"This logic is spreading among Republicans," he continued. "Consider the comments Texas Lt. Gov. Dan Patrick made Monday night on Fox News: 'No one reached out to me and said as a senior citizen, are you willing to take a chance on your survival in exchange for keeping the America that all America loves for your children and grandchildren. And if that’s the exchange, I’m all in.'"

"I’m old enough to remember when conservatives worried that Obamacare rationing would lead to “death panels” whereby older patients would be deemed too sick and expensive to help," he wrote. "After all, why throw good money after bad? A few short years later, and it is Republicans who are making a shockingly similar rationalization."

Stating, "This is a weird turn of events for the party of life," Lewis lamented, "We have skipped over that nuanced discussion and gone straight to Republicans rationalizing the idea that we can just wipe out a million or so people to fix the economy."

"Ultimately, we have a political party that has shown its true colors. Look no further than its standard-bearer. Consider his selfish motivations and petty behavior. Consider his long-held worldview that sees some people as genetic winners and some people as losers," he explained. " This is a man who responded to a pandemic by thinking, 'How can I be on TV more?' It’s truly depraved."

"If human life and GDP become mutually exclusive for a pandemic-stricken America, which one do you think he’s going to choose? I think we already know the answer to that one," he concluded.