MSNBC host goes off on Trump for 'choosing to ignore' intelligence on coronavirus: 'That's a provable lie' 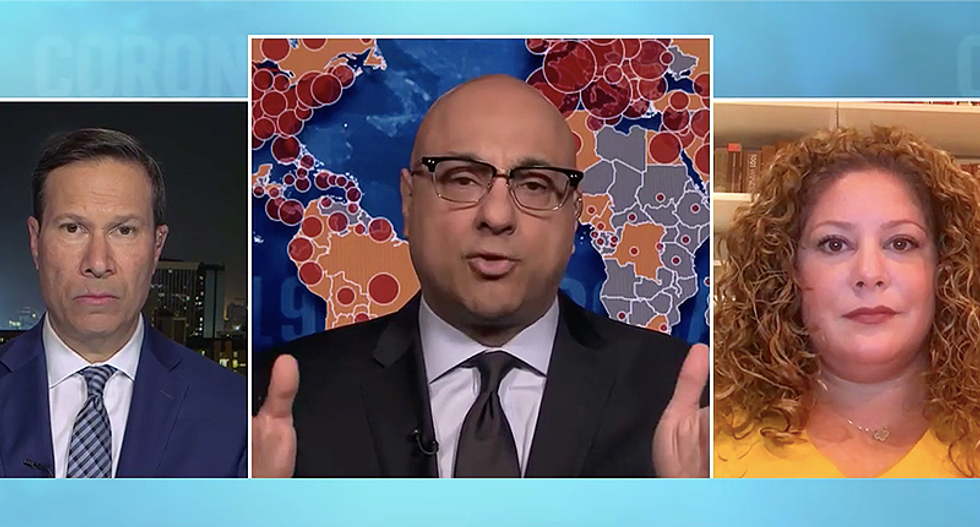 MSNBC had a panel discussion Sunday about the ways in which President Donald Trump has ignored all of the intelligence that warned him that a health crisis was coming.

Reports have surfaced over the past several weeks about the information that Trump received urging him to prepare for the coronavirus, but it was ignored. U.S. intelligence agencies were sounding the alarm in January and February that a pandemic was likely and that it would come to the United States, the Washington Post reported. Trump ignored the reports. Politico reported that the Trump team failed to heed warnings about a pandemic by top advisers. Those people are now gone from the administration.

Former National Security Adviser Susan Rice warned the NSC that the U.S. wasn't prepared for such a crisis back in 2017 and her reports were ignored. Trump was given a 69-page report three years ago that warned the country wasn't ready in case of a pandemic. Trump's team failed to use the "pandemic playbook," which could have also saved lives.

MSNBC's Ali Velshi spoke with Katrina Mulligan, who previously directed preparedness and response at the Justice Department. She explained that the Obama administration had a pandemic exercise as part of the transition process.

"Because some people in the White House felt, 'we already did that. We already explored the pandemic response. We don't really need to do anything more,'" Mulligan explained. "Now, it's interesting to hear the president say, 'Nobody could have conceived of this. "Nobody could have thought that this was going to happen" because, in fact, the outgoing administration handed him an actual playbook of exactly this type of thing happening and exactly what to do to respond to it effectively. He just hasn't used that playbook."

Velshi noted that Trump admitted in the press conference that he heard, for the first time, that 2.2 million people could die if he doesn't take action.

"That's an absolute lie," Velshi said about Trump, saying he heard it for the first time. "We know it's a provable lie. We know Dr. Birx, who's been advising him, has this information. It's a study that was published in the New York Times in the middle of March. I had guests on my show in January, and I have no intelligence, telling me that this was going to be a concern. He chose to avoid this."

Former FBI assistant director of counterintelligence, Frank Figliuzzi, explained that many in the intelligence community anticipated something significant like this happening, that Trump would get intelligence about and ignore it because he has been at war with the intel community since his campaign.

"Those of us who served in the intelligence community knew that this day would eventually come," he said. "The day when the president's disdain for and ignorance of intelligence reporting would actually be at our own peril. Personally, Ali, I thought that might be in the form of ignoring an imminent terrorist attack or imminent cyber attack. It turns out it's even worse than that, in terms of potential death toll and impact on all of us because we know from clear reporting that as early as January he was getting intelligence agency reporting that there was a big problem coming out of China and that it had actionable intelligence that needed to be acted on."

Trump chose to ignore it, he said, which is par for the course with this president.

"He's chosen to ignore intelligence community reporting that the Saudi crown prince was involved in the murder of a journalist from the Washington Post. He's chosen to ignore that Vladimir Putin was to blame for the hacking and the interruption of our and messing with our presidential campaign in 2016. He's ignoring intelligence that North Korea continues to develop a nuclear program. And now it's impacting all of us, and he had a pandemic playbook on the shelf. It was 'Pandemic for Dummies.' And he's refused to pull that off the shelf, and we're all suffering from it."