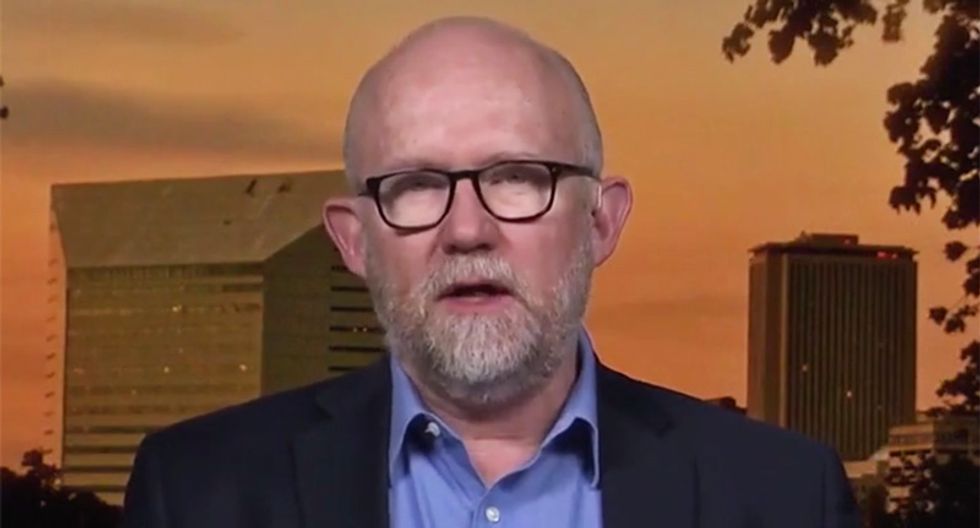 The chickens are about to come home to roost for President Donald Trump and his supporters, according to former Republican strategist Rick Wilson.

The president has finally found an opponent he can't bully and bluster into submission in the coronavirus outbreak that's been spreading for weeks, and the pandemic will teach Trump and his fans a terrible lesson, Wilson wrote for The Daily Beast.

"They're learning that you can get away with a chain of scams, business failures, bankruptcies, and branding disasters and win the presidency but still fail utterly as a president and a person," Wilson writes. "It took a global pandemic, the bursting of the Fed-fueled stock market bubble, and an opponent Trump can't face. It doesn't read Twitter, watch Fox, or respond to derisive nicknames."

"It took a plague to peel back the scales from his eyes finally, and even now, too many Trumpist Republicans insist this is fine," he adds. "Heckuva job, Trumpie."

Trump wasted valuable weeks ignoring the virus because he believed it posed a threat to his re-election, and he downplayed the threat instead of taking decisive action -- and that only made everything worse.

"When tested by the fire of crisis, Trump showed us what he's always been; a weak, spoiled, intellectually vacant conman who has stumbled through a life of betrayal and failure papered over by bullsh*t and public relations," Wilson writes. "The media image from The Apprentice that hypnotized so many Trump voters was always the product of Mark Burnett's writers' room, not reality. The bold leader was a teleprompter confection, D-grade celebrity playing a C-grade CEO in a reality show."

Trump has failed every single test of his leadership in this crisis, Wilson writes, and it has destroyed the economy, left Americans locked in quarantine indefinitely and will cost possibly millions of lives.

"Good leaders react to a crisis swiftly and honestly," he writes. "Bad leaders blameshift, lie, cover-up and try to rewrite history. Good crisis leadership has a set of consistent characteristics; it is honest, transparent, and prompt. The path Trump chose, naturally, was the opposite."

"Terrible leaders pretend there is no crisis, lie to their stakeholders, the press, and the public. They are frequently shocked by how bad it really looks from the outside," Wilson adds. "They minimize impacts, and issue statements that are either overly lawyered or blustery swagger."

Trump and his allies are trying to gin up a controversy over using racist language to refer to the virus as a distraction and to rally the MAGA crowd against Democratic critics, rather than holding the president accountable for his failures.

"And we're not even at the end of the beginning of this pandemic," he adds. "God help us."