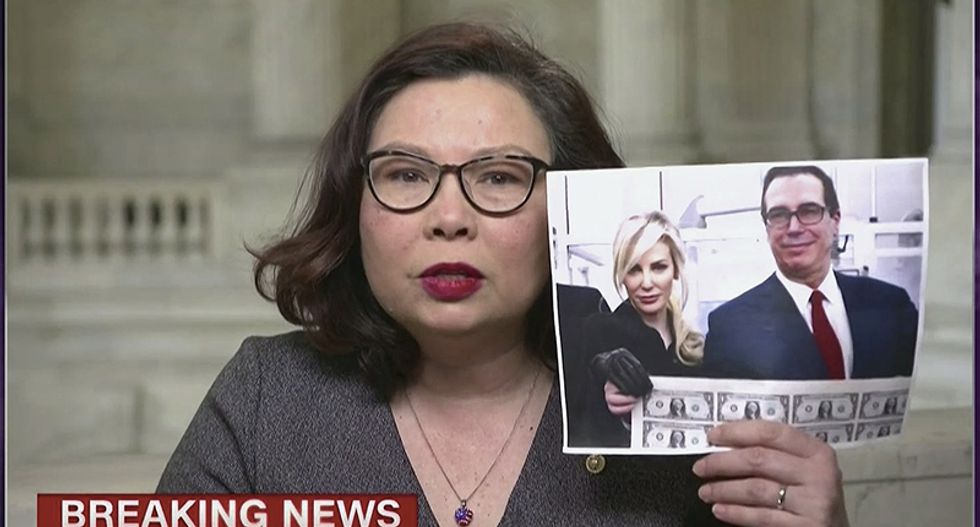 Sen. Tammy Duckworth (D-IL) went off on Treasury Secretary Steve Mnuchin during a CNN discussion Sunday after his comments about the economy. She even held up a photo of the visit Mnuchin took to the Bureau of Engraving and Printing in Washington. He was seen with his wife holding up sheets of money being printed with his signature on it.

She began by blasting the GOP's new CEO bailout bill for the major corporations that complain they're losing money but are still sitting on buckets of funds and stocks.

"The package that the Republicans have drawn up does nothing to help struggling workers," she said. "Struggling workers need help today and they need jobs safeguarded for tomorrow. There are no protections for them. First responders need PPE equipment, personal protective equipment and resources today to our hospitals and our first responders. Nothing in it for them. And instead, it creates a $500 billion slush fund for Steve Mnuchin to hand out loans to corporations as he pleases's."

"So do Americans think that this man, this man is going to look out for the well-being of working Americans over the well-being of corporations and corporate CEOs? I don't trust him," she said. "Not without oversight. The slush fund proposed in their bill, no Democrat had any chance to put any, you know, requirements into, it does not provide oversights for him. I'm glad the vote is postponed. It needs to be. I urge my Republican colleagues to please allow Democrats to come to the negotiating table and let's write a bill together that will safeguard Americans, safeguard us in this public health emergency. Safeguard us through this economic crisis."