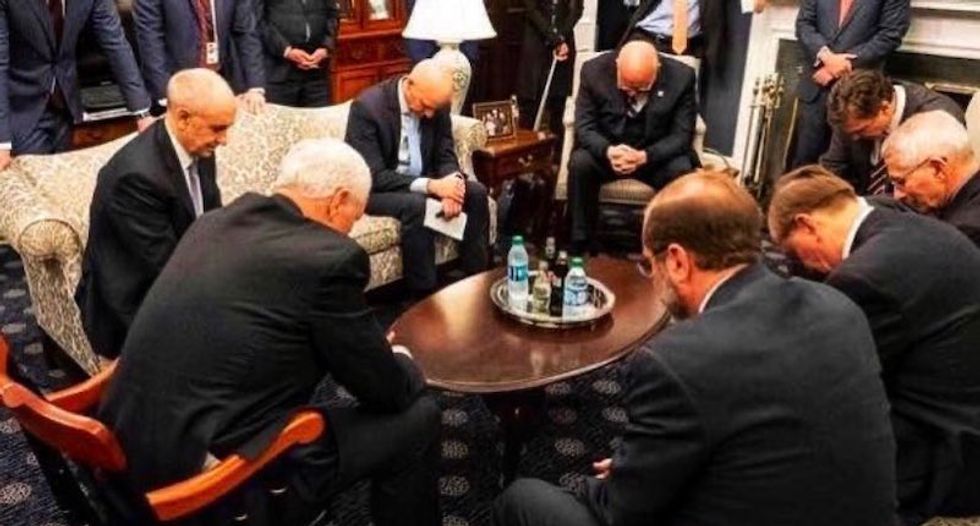 A plague is upon us. And white evangelicals, naturally, are on the scene—theologizing the COVID-19 outbreak, praying, scolding, and generally being counterproductive. Unfortunately, the Trump administration’s response is being led by one of them—Vice President Mike Pence, a fellow Hoosier and one who, as governor of Indiana, allowed an HIV outbreak to blow up because his Christian extremist ideology prevented him from adopting sensible policy. There are reasons I’ve left that state.

If you find that Pence’s record of failing to pray disease away doesn't inspire confidence in his ability to tackle coronavirus, you'll most likely find the derision aimed at a picture of Pence and his (decidedly white and male) team in prayer that's been going around perfectly reasonable.

However, if you're a white evangelical or evangelical-adjacent commentator or pastor with pretensions to respectability, your response might instead be to put out a tone-deaf take in defense of the picture. And then to take umbrage, naturally couched in the rhetoric of holier-than-thouness, when people inevitably point out that your tone-deaf take is tone-deaf.

It is precisely this scene that’s been playing out on religion Twitter since Monday. In addition to culture warriors Franklin Graham and Robert P. George, the charge was also led by none other than award-winning religion writer Jonathan Merritt who scolded those critical of the VP’s public response to the Coronavirus outbreak:

Criticize Mike Pence all you want for being inept in his strategy to dealing with this. But mocking him for praying… https://t.co/E8dFFnEwGG
— Jonathan Merritt (@Jonathan Merritt)1583117264.0

Graham and George are clear proponents of a “Christian nation,” but Merritt should know better. Did he pause to consider the broader context, one wonders, before tweeting that “mocking [Pence] for praying—like 79% of Americans have done in the past 3 months—is why so many regular Americans despise wine-and-cheese liberals”?

For starters, the Coronavirus Task Force is a U.S. government effort. Unless the prayer was entirely without reference to any specific religion—and I’d be happy to take bets on whether or not a Mike Pence prayer was Christian—it is utterly inappropriate. I mean, does anyone seriously think that Graham and George defended Pence assuming that it wasn’t an explicitly Christian prayer?

Also, putting aside the fact that this godless liberal can only afford inexpensive wine, did Merritt stop to think about the relationship of the praying Pence image to the constant barrage of Christian nationalist imagery put out by the Trump regime, which might help explain the negative reaction?

Did he ask himself whether his use of the term “regular American” might not play directly into the nationalist Christian supremacism that’s fueling the destruction of American democracy, such as it was? Or that words like “regular,” “real,” and “normal,” in this context are often code for “conservative white Christians”?

Might Merritt have devoted a thought or two to the possibility that American criticism of “thoughts and prayers” responses to real-world problems have everything to do with the fact that right-wing Christians—white evangelicals above all—constitute the one demographic that stands in the way of us seriously addressing our gun violence problem? As Daniel Schultz wrote on RD two years ago, in the wake of the Parkland shooting, in his defense of prayers, “Praying for victims of violence and injustice without being changed by their grief is shit.” In other words, people aren’t mocking Pence’s prayer circle because they’re praying, they’re mocking it because it reflects a history of substituting prayer for action in situations that require material actions that the prayer-givers are powerful enough to take.

Alas, we cannot know what’s in Jonathan Merritt’s heart. We can be pretty sure, however, that something similar is taking place in the heart of Brian Zahnd, Christian author and head pastor of the non-denominational Word of Life Church in St. Joseph, MO. In response to author and “recovering fundamentalist” Marc Alan Schelske’s rather muted tweet in defense of those who criticized the Pence prayer image, Zahnd put forth what he imagines is a “high road” tweet:

@schelske @JonathanMerritt What Jesus forbids is for *me* to pray in public from the motive of being seen praying i… https://t.co/fnfI0Biw38
— Brian Zahnd (@Brian Zahnd)1583165413.0

While Merritt is a gay man and Zahnd has refused to state his views on same-sex marriage publicly, both certainly share considerable white male privilege, which might just have something to do with how skewed their perspective can be when it comes to an image of nearly all white men more than likely engaging in Christian prayer as part of a U.S. government task force.

Zahnd has a curious understanding of what it means to be inclusive, to put it generously. The man, whose Word of Life church is non-affirming in LGBTQ policy and doesn’t disclose its policy on the inclusion of women in leadership, once tweeted with evident pride that his congregation, in its “culture of kindness,” included both ICE officers and undocumented immigrants, thus putting the latter immediately at risk for his moment of performative kumbaya.

In fairness, Zahnd has called for humane treatment of detained refugees and asylum seekers:

Nevertheless, it’s unsurprising that Zahnd came to Merritt’s (and, more or less, Pence’s) defense in the unfolding Twitter storm. It may be that pushback on this inspired Zahnd to later tweet a cryptic comment on how “the satan” seeks to divide us:

The problem with Christians like Merritt and Zahnd who fancy themselves uniters is that their approach to “unity” is one that favors the already privileged at the expense of othered groups. Despite striving to be more inclusive than most conservative Christians, Merritt and Zahnd consistently call for those harmed by right-wing social politics and Christian nationalism to play nice with Christian nationalists, allowing their dignity and equality to be trampled on in the process.

Merritt and Zahnd are, to be sure, no Rick Wiles, the extreme anti-Semitic Christian TV host who recently declared that God would stop the coronavirus pandemic if China would convert to Christianity. Nor are they even Jason Seville, who in the face of the disaster wrote a self-aggrandizing piece for The Gospel Coalition on why he would be remaining in China, where he pastors a church.

Nevertheless, the Zahnds and Merritts of the world could do much better in helping America move past this era of empty “thoughts and prayers” if they would devote some of the former—and hell, perhaps even some of the latter—to the ways in which they’re still blinded to the realities of those Americans (and others) they don’t see as “regular.”