Trump campaign panicked his 2020 re-election prospects are in free fall due to his pandemic comments: report 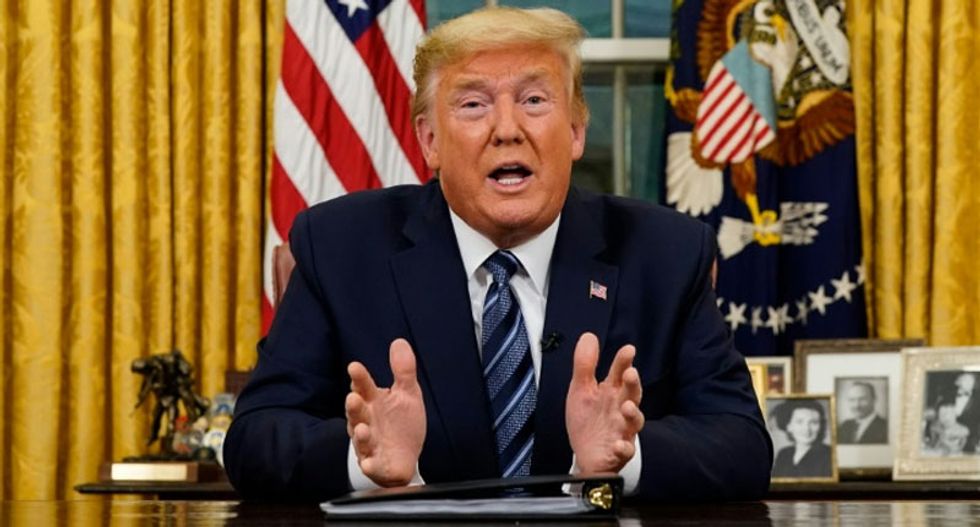 Trump 2020 campaign officials have had to make major changes to their re-election strategy for November by switching to defense due to his administration's coronavirus bungling instead of attacking his presumptive opponent, former Vice President Joe Biden.

According to a report from Politico, Trump campaign officials are privately "fretting" that the president is damaging his chances of being re-elected by appearing at the daily press conferences held by the White House coronavirus task force and are reaching out to conservative news sources to help bury bad news.

"Faced with endless video clips of Donald Trump downplaying the escalating outbreak, Trump aides and allies are working furiously to instead highlight the president’s recent actions and comments," Politico's Anita Kumar wrote. "Their effort comprises three tactics: Blanket supporters with detailed timelines of every action the Trump administration took. Amplify praise of those actions. And forcefully push back against anyone who criticizes those actions."

Kumar notes, "Trump’s aides and allies [now] realize the president’s campaign for a second term has been completely transformed in a matter of weeks. It will now come down to his handling of the coronavirus pandemic and his response to a devastated economy," while pointing out that attacks on Biden have been shelved for the near future.

"The Trump campaign had wanted to focus on a long list of other issues as the president launched a general election race against Democrat Joe Biden: the president’s impeachment acquittal, Biden’s acuity and overseas actions by Biden’s son, Hunter," the report states. "Instead, it has shifted almost entirely to rehabilitating Trump’s handling of the coronavirus crisis."

"Trump allies who were confident about the president’s reelection prospects just weeks ago — thanks to a strong economy and record stock market — have begun to fret as they see him being blamed by state and local leaders, members of Congress and public health officials for failing to quickly test patients and distribute masks, ventilators and other supplies," Kumar explained. "Trump allies said the campaign had no choice but to do what it always does when a crisis engulfs the presidency, from impeachment to the threat of war with Iran: quickly and quietly follow the president’s lead — pushing out new talking points, buying new Facebook ads and lining up voices to defend the president forcefully."

According to a Republican close to the president, "They want to try to control that narrative as much as possible. It’s irresponsible to do anything else.”

Speaking with Politico, 2016 campaign adviser Michael Caputo said that Trump will continue to be at a disadvantage the longer the coronavirus crisis continues.

“They can criticize him for every move he makes,” he said of Biden’s campaign.