Trump's coronavirus lies are putting his own rally-goers in danger -- and they'll eventually learn the truth: MSNBC's Morning Joe 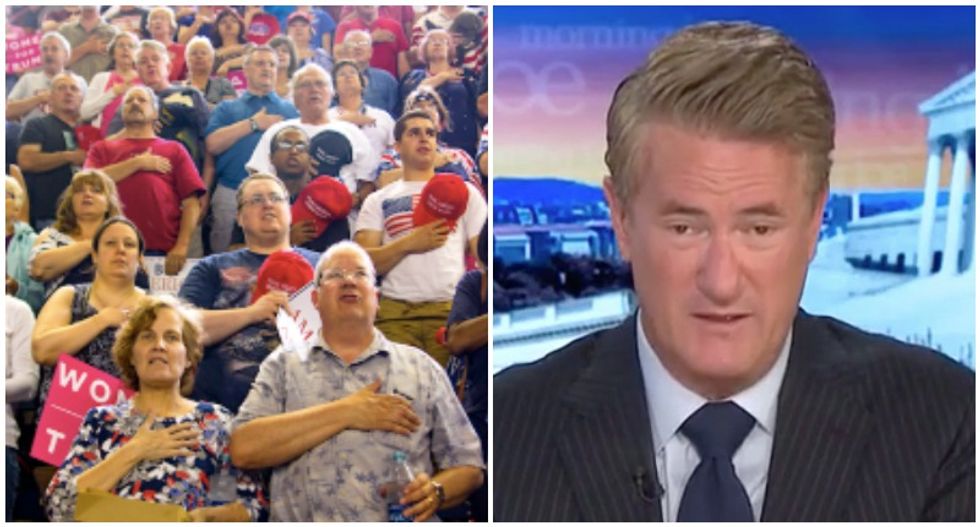 President Donald Trump went on Fox News to call into question health statistics and spread dubious claims about the coronavirus outbreak, and MSNBC's Joe Scarborough and Mika Brzezinski were astonished.

The president inaccurately compared COVID-19 to the flu, claimed patients would get better on their own at work and claimed the WHO's estimated 3.4 percent death rate was probably less than 1 percent.

"Oh, my god -- a 'false number,'" Brzezinski said. "What President Trump called the World Health Organization's latest global death rate of the coronavirus, talking about a 'hunch' what he has going on."

Her "Morning Joe" co-host agreed his claims were wildly irresponsible.

"Instead of the scientific numbers, he has a hunch," Scarborough said. "Even more concerning than that is the fact that the president of the United States is telling people that they're going to get better by sitting around and 'going back to work' with the coronavirus."

"This is exactly what is causing right now consternation up in New Hampshire," he added, "where a Dartmouth hospital employee was told to self-quarantine and instead went out that night to a school event, and now, who knows how far it spread? You look at the New York case to see that one man has infected his entire family, infected the man who drove him to the hospital, who then affected his family. This spreads quickly and easily, so for Donald Trump to be saying, you know, you can just sit around and get better and, hey, you can even go back to work is about as reckless and irresponsible as you can imagine. Let's hope the White House clarifies that later on today."

Outbreaks in China and Iran became much worse because the public could not trust their leadership, Scarborough said, and he feared the U.S. outbreak will turn into a pandemic because the president and his team were failing that same test.

"The United States of America should be able to learn from the mistakes of China and Iran, should be able to learn about the proper way to do it," Scarborough said. "I know that Donald Trump is not capable of doing that, but for the love of god, I am hopeful that Vice President [Mike] Pence and other health care officials in that administration, that people close to the president of the United States can ask him at the very least to back up and back off."

"There are a lot of conservatives," he added, "there are a lot of older Americans who voted for Donald Trump before and who will vote for Donald trump again, who will go to his rallies, who will hear from their doctors, and understand that what the president is saying is reckless and false and could put their lives in danger. So there's no political upside to lying about our down playing this epidemic, and the net result of that is turning and epidemic that can be controlled into a pandemic that races out of control across the globe and kills far too many Americans and other citizens across the world."