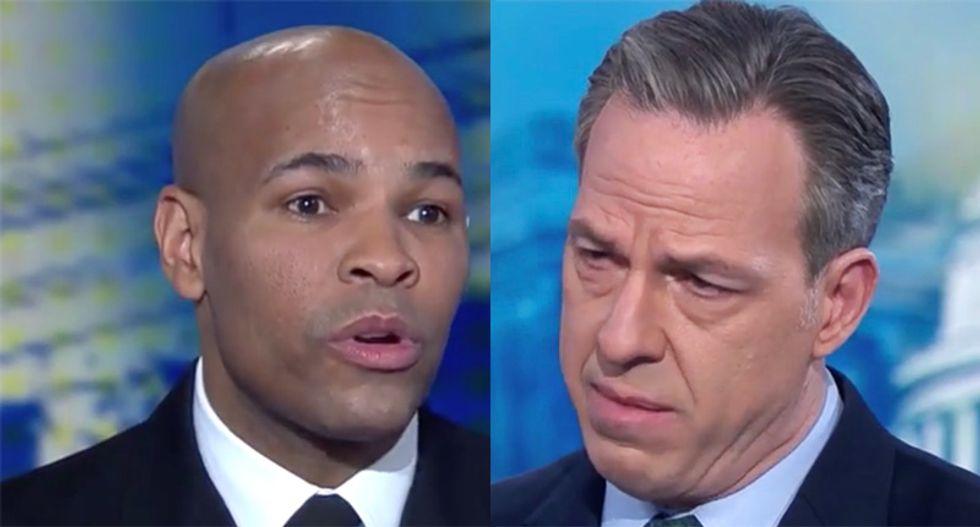 Appearing on CNN's "State of the Union" early Sunday morning, the Surgeon General of the U.S. was repeatedly put on the spot by host Jake Tapper over the bungled response to the coronavirus Donald Trump's administration and the persistent lies being spouted by White House officials.

Speaking with Dr. Jerome Adams, the CNN host admitted that the public should not panic about the growing epidemic before sharing clips of Trump advisors Kellyanne Conway and Larry Kudlow telling reporters that the epidemic has been contained.

"That's not true," Tapper said after the clips rolled. "It's not contained, it's not relatively contained. Have you expressed your desire for people in the White House to share the facts and be honest?"

"Well, this is a novel virus, it's a new situation, and the messaging, quite frankly, is hard," Adams parried. "But here's what I want the American people to know; from a public health point of view, and I am a public health expert, the first thing you want to try to do is contain the virus. and some parts of the country have contained it, meaning their preventing spread in their communities in the first place. But --."

"We don't really know that, right?" the CNN host interrupted. "We know of one case in D.C. We don't know that that means there's only one person in D.C. there aren't enough testing kits. "

"We actually feel pretty good that some parts of the country have contained it, just like when you look at the flu, the flu tracker, some parts of the country are having much more severe flu seasons," Adams attempted. "Some are having very mild flu seasons. Same thing for coronavirus; you want to keep it out of your community. Once you know it's in your community you want to take the steps to prevent spread within the community and keep those most at risk safe."