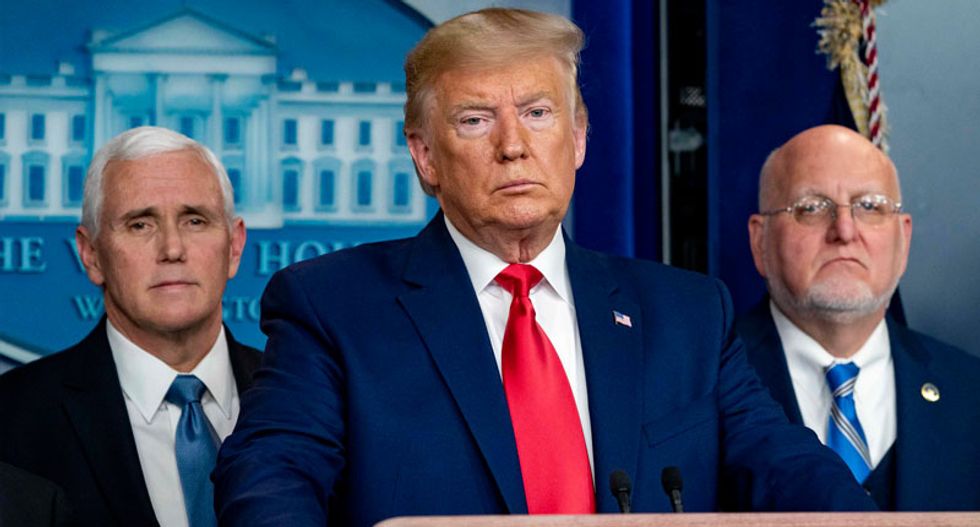 There is no doubt that there have been U.S. government missteps on the path towards trying to control the spread of coronavirus.

Of course, it is equally true that late or not, disorganized or not, appropriate actions appear to be under way now, even as the White House may be struggling to create a fully effective program reaching into all areas where testing is needed. The White House has insisted only on centralizing messaging on the disease, a power it has used to attack perceived political foes for anything that goes wrong -- as if that makes it any easier to feel secure about illness.

A ProPublica report details that by shunning World Health Organization disease test guidelines, the United States lost valuable week that could have been used to track the illness spread. Indeed, the American alternative test did not work as expected, incorrectly flagging viruses other than the targeted COVID-19, and has had to be replaced.

As reported by ProPublica and by The New York Times yesterday, the lack of a reliable test prevented local officials from taking crucial first steps towards controlling a possible outbreak – leading to questions of whether it is the disease spread or reporting of new cases that is lagging.

Health and Human Services, the Centers for Disease Control and Prevention and national infectious disease officials all took pains this week to assure than tens of thousands of such test kits are on the way. Because the feds finally shared the winning testing formulas with commercial and state and local officials, within two weeks, we should be in position to test upwards of 20,000 people a day, they now say, or a capacity of a million tests within a very short time.

Still, the CDC has withdrawn tracking numbers about testing from its website, fueling the belief that the White House is still playing politics with health information.

But as fears spread with news of early spread of the disease and falling financial market prices, there was overreliance on development of a specific American test.

Axios, meanwhile, informed us about unspecified failures of the first test kits that were circulated from an Atlanta, Ga., lab, that also contributed to early missteps.  The CDC now has moved the contracts elsewhere.

To degrees more or less, there are similar reports circulating in the news media, in on-line forums and posts, and from conflicting remarks from government sources about other aspects of the U.S. government response towards vaccine development, mask production, where to place and care for quarantined patients and any needed stockpiling of medicines that depend on Chinese supply lines.

Of course, this administration also had dismissed an existing infectious disease response panel, proposed significant cuts in public health and for the CDC, where a number of vacancies remain unfilled, and generally conducts big campaigns against Obamacare, Medicare and science. It has done nothing publicly to ask social media companies to quash bad health information.

In their place, Trump credits himself for early and stronger travel bans, even if the evidence now is about home-grown coronavirus spread.

Making sense of it all is difficult, and probably best comes with a large dose of patience. Underscoring the difficulties is the insistence of Donald Trump’s White House to control all official communications about coronavirus, even as Trump himself and his closest family and associates are weaponizing the illness to attack perceived political foes.

As The Washington Post described after talks with two dozen administration officials, the White House spent time scrambling to gain control of a rudderless response defined by bureaucratic infighting, confusion and misinformation.

Despite naming Vice President Mike Pence as the single spokesman (who keeps saying that treatment decision are primarily on local officials), it was Trump who announced the first death in the nation, getting the gender of the patient wrong. It is the kind of mistake that makes it dicey to trust whether citizens are getting the appropriate and verified information that is needed for preparation if and when the disease actually does spread.

Given a certain level of mistrust, here are several public information topics for which we should remain on high alert for quackery.

--The disease itself. At various times, Trump, with little apparent evidence, has noted that the disease will wane as temperatures warm, and people get fewer colds and viruses altogether. He omits information reflected in past pandemics that it is the second season, starting in the fall, where the largest number of deaths seem to happen from communicable public respiratory illnesses. In any event, Trump’s public concern appears to reflect more a shield from charges that his administration made any mistakes than concern about actual health. To date, there is no evidence of a daily White House briefing on illness efforts, and substantial heaps of disdain for press reports that seek to quote public health officials.

--Drug supplies. There is concern in the media at least about the number of prescription drugs made in China, where factories are produced. Any useful information here seems to revolve around the singular advice to call your own doctor, who is unlikely to know much about the nation’s availability of anti-virus medicine stores. Surely, this is an area where national coordination could result in calmer reaction.

-- Vaccine. The variability of reporting about timing for preventive vaccines is pretty severe, despite obvious efforts to speed development, clinical tests and approvals. Some press reports are suggesting we will have the first vaccine for testing within several weeks, even though there seems general agreement that vaccines will not be commercially available until late 2021 – despite claims by Trump that development of vaccines is well under way. There also is disagreement at this point about who should get a vaccine.

--Staying home. We’re getting plenty of information, official and not, about staying home more, working from home if possible, avoiding crowds and the like if and when word is received that the illness is spreading. We understand at this point that COVID-19 presents with fever, fatigue, myalgia, arthralgia, and minimal non-productive cough that does not necessitate hospitalization, but does suggest staying away from infecting others. Still, we’re already seeing runs on stores for masks, Purell and hand disinfectants, and the like. It seems unlikely we are depending on the White House for any of this.

--Shutting down. What we are depending on government to know when to stop big gatherings, however. It is unclear when and why we already see Oregon shutting schools, or cancelling big events. For sure, no one is suggesting stopping Trump reelection rallies. For all the bromides being made available, this is an area where the White House could be useful.

--International cooperation and research. This is the one area where we should be seeking action from our government. Curiously, there is little being reported about it, most likely because the Trump White House believes foremost in isolation and America First.

--Filling needed positions or efforts that have been cut. The Washington Post told us that the White House official charged with leading the U.S. response to deadly pandemics left nearly two years ago as his global health security team was disbanded. Federal funding for preventing and mitigating the spread of infectious disease has been repeatedly threatened since President Trump’s election. Trump said he has no regrets about those actions and that expertise and resources can be quickly ramped up to meet the current needs. Congress has promised to pony up new money quickly.

--Uncertainty and lack of trusted information. The very officials whose expertise the president is now counting on are those whom Trump has repeatedly maligned or dismissed. Just as the financial markets and the public want order and clarity, Trump is offering contradictory information or politicizing it, while specifically saying that Democrats should not politicize it. He is using the disease as a club to call on the Federal Reserve to lower borrowing rates, for example, which actually is a long-term goal, to temporarily goose market performance numbers.

As well as fighting illness, we need to fight about reliable information about illness.