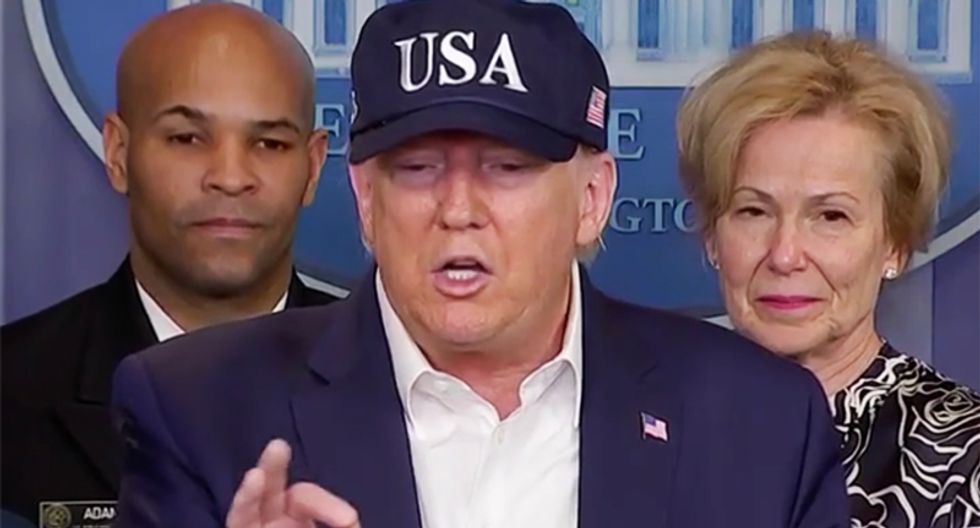 During a surprise appearance at a press conference that was supposed to be helmed by Vice President Mike Pence, Donald Trump cut off MSNBC's Kelly O'Donnell as she tried to press him over sending " mixed messages" to the public every time he publically addresses the nation.

After O'Donnell asked him about his Friday Rose Garden comments and shaking the hands of the CEOs in attendance -- directly contradicting the CDC's advice to avoid contact that could spread the virus -- the president explained that he did it out of habit, while also defending manhandling the microphone for other speakers.

After the White House correspondent asked, "Why are you shaking hands?" Trump responded, "It's almost a habit. Frankly, I was a non-handshaker for the most part. I know it, too political people walk up. They want to shake my hand and I say, well --," before the reporter tried to get a word in.

"Wait a minute, just take it nice and easy, just relax," Trump cut her off. "People come up to me and somebody put their hand out and it's a natural reflex and we're all getting out of it -- all of us have that problem."

California’s torrential storms from late December through early January will allow the State Water Project to deliver nearly 1.3 million acre-feet of water throughout the state this year – six times as much as projected before the storms, state water officials said. Entrenched in a third consecutive year of severe drought conditions, the California Department of Water Resources on Dec. 1 announced it would be able to deliver only 5% of water supply requested for 2023. The State Water Project stores and delivers water to 29 water agencies that serve 27 million Californians. But now, the state s...