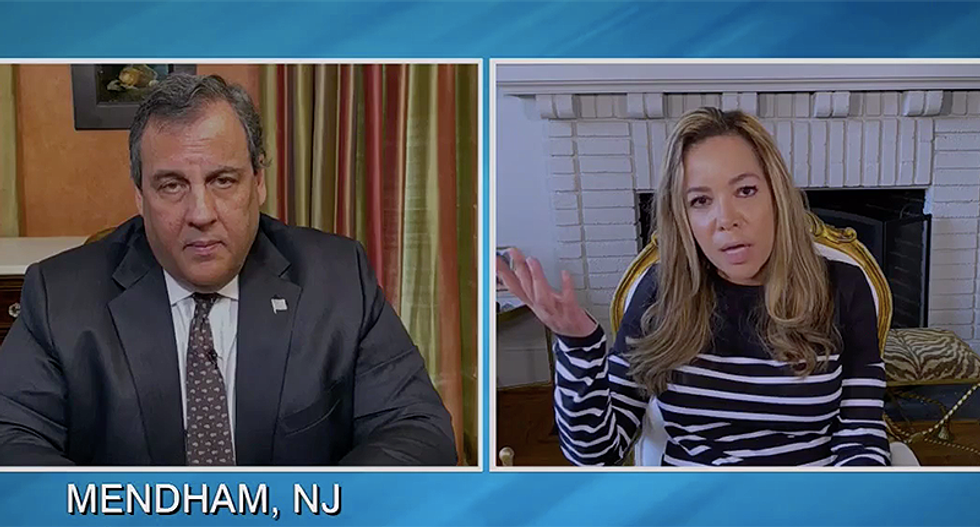 Former Gov. Chris Christie (R-NJ) joined the chorus of Republicans trying to protect the president from accountability for his inaction during February.

In an appearance on "The View" Tuesday, co-host Sunny Hostin asked Christie about Trump hiding his head in the sand during the month of February when he should have been acting on the crisis. Instead, she said, "he was golfing."

Christie snapped that she was part of the problem for asking the question in that way and talking about Trump golfing because there were members of Congress that were likely golfing in February.

"First of all, the golfing, Sunny, to me that's part of what I talked about before about the death spiral, okay?" said Christie. "The golfing thing is just a gratuitous shot that we don't need to take. Believe me, members of Congress were golfing and doing -- the president and members of Congress and others in state governments, I'm sure, were playing golf as well at certain times."

“They have no clue, they can't even count their votes in Iowa," Trump told an audience in South Carolina Feb. 28. “This is their new hoax."

When Christie claimed that other officials were playing golf, Hostin clapped back, "He's the president, 70 days, Chris." The reference was to the 70 days of inaction by Trump during the initial months of the outbreak.

"Believe me, I'm aware, Sunny, that he's the president. I actually read the newspaper every day and I'm aware that he's the president," Christie snapped. "Here's the thing that's much more subtle about this. This is not -- this is a competing interest decision when you're a leader because remember, we now will talk about what's happened to the economy once we made the decision to close everything down. And you have now over 12 million people unemployed, probably more to come in the weeks to come. There's a lot of competing interest, and also I think frankly we weren't getting honest information from China. I think that's part of what contributed to this as well."

China has been blamed for being slow to understand what was happening and discover what the virus actually was and where it was coming from. Initially, they thought it was a deadly form of pneumonia since it presents in much of the same way. It took them about a month to discover it was a viral strain of something more serious. Even after that, Trump didn't shut down flights from China until a month later. About 40,000 Americans came into the United States after that "ban" on flights and a total of 430,000-plus people entered the U.S. after the first of the year.

In a conversation with MSNBC on Sunday, Dr. Anthony Fauci explained that the ban came as too little too late, because the U.S. likely already had the virus and simply didn't know. Trump has bragged that there were no cases of the virus in the U.S. in January and February and that's why he didn't act. Mass testing wasn't being conducted in those months because there were flaws in what few test kits the CDC sent out.

An extensive New York Times expose over the weekend revealed that Trump was being warned in January that this would be a major problem and officials were begging action in those first critical months where the only action taken was a soft-ban on Chinese travel.