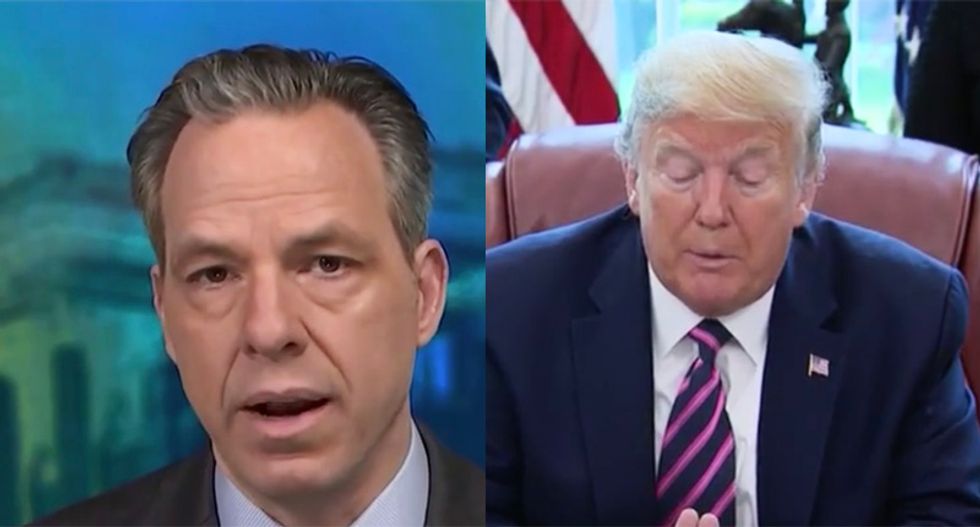 In his closing comments on CNN's "State of the Union" on Sunday morning, host Jake Tapper took Republicans -- and the GOP leadership in particular -- to task for standing idly by while Donald Trump bungles the coronavirus crisis, including suggesting "dangerous" solutions to treating victims of the virus.

Using the president's comment about the possibility of treating patients with common household disinfectants as a jumping-off point, Tapper called out the Republican leadership.

"We're running out of words to describe this era," Tapper lectured. "Republicans in Congress and in the Trump administration know that not only is the president failing to rise to this moment to, for example, get the nation on a path to widespread testing, the president is now making open ponderings about treatments that experts worry could actually harm people."

"His anti-scientific musings have been dangerous," he continued. "We saw this with his downplaying the virus. Two months ago today the president said he had done a good job since the U.S.. had only 15 cases, which would soon go down to almost zero. Then the president was pushing the use of hydroxychloroquine, 'what have you got to lose,' he said? Well, the FDA on Friday issued a caution against the use of that drug outside of a hospital or a clinical trial due to the risk of heart rhythm problems."

"Republican leaders need to acknowledge the reality of the situation; they need to intervene," he continued. "They need to convince President Trump to defer to the experts and focus on the needs of, not his ego, but the sick and the dying and the people trying to care for them."

"There is going to be a history of this era written and those who are pretending this irresponsibility is not happening, they will be remembered as villains," he concluded.