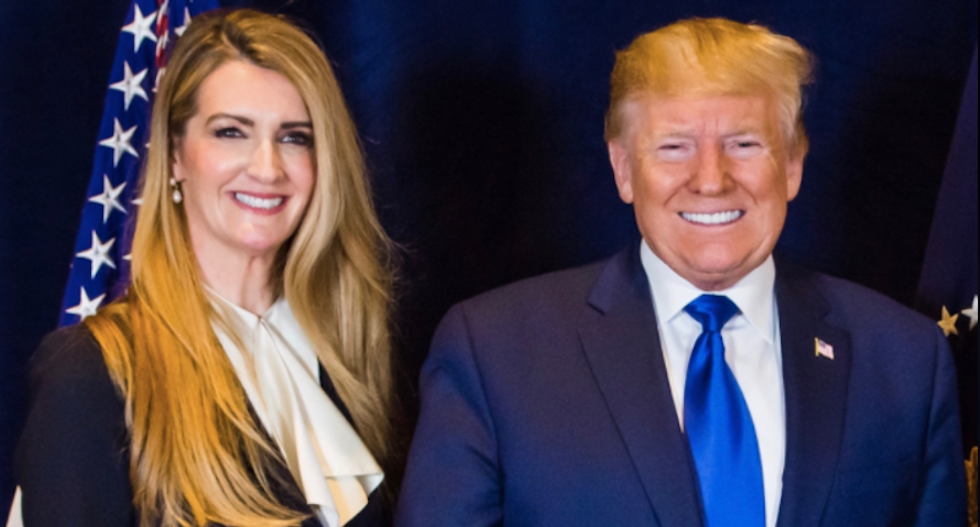 The budding political career of Sen. Kelly Loeffler (R-GA), a wealthy businesswoman appointed to Georgia's vacant Senate seat, was critically wounded following reports she made suspicious stock trades in industries impacted by the coronavirus pandemic while receiving classified briefings on the virus unavailable to the public.

Since the news has emerged, Loeffler has struggled to protect her image. She has claimed that it is "socialist" to criticize her finances. She has also announced she is liquidating her stock portfolio, but this has rung hollow to some observers given that she still plans to reinvest the money she made off it. Now, a GOP group has been set up to anonymously attack Loeffler in favor of Rep. Doug Collins, who is challenging her in the open Senate primary.

According to The Daily Beast, Loeffler is now pursuing a new strategy to save her job: tie herself to President Donald Trump.

"The Georgia Republican is taking every chance she gets to plug her presidential appointment to a White House task force on 'reopening America,'" reported Lachlan Markey. "She's using the appointment to attempt to court campaign supporters, taking out paid ads promoting it, and has even set up a stand-alone campaign website offering coronavirus information to constituents—a site that also happens to help her build her campaign's voter contact list."

"Under fire, Loeffler appears to have been thrown a bit of a political lifeline from Trump," continued the report. "Her appointment to his coronavirus task force may have been exceedingly insignificant, as the president tapped every Republican Senator except Mitt Romney for the task. But her Republican primary opponent, Rep. Doug Collins, was notably absent from the White House’s list of 32 House members appointed to the panel."

A slew of Democrats are also fighting to make the runoff for the Senate race, with the leading candidate being pastor Raphael Warnock.