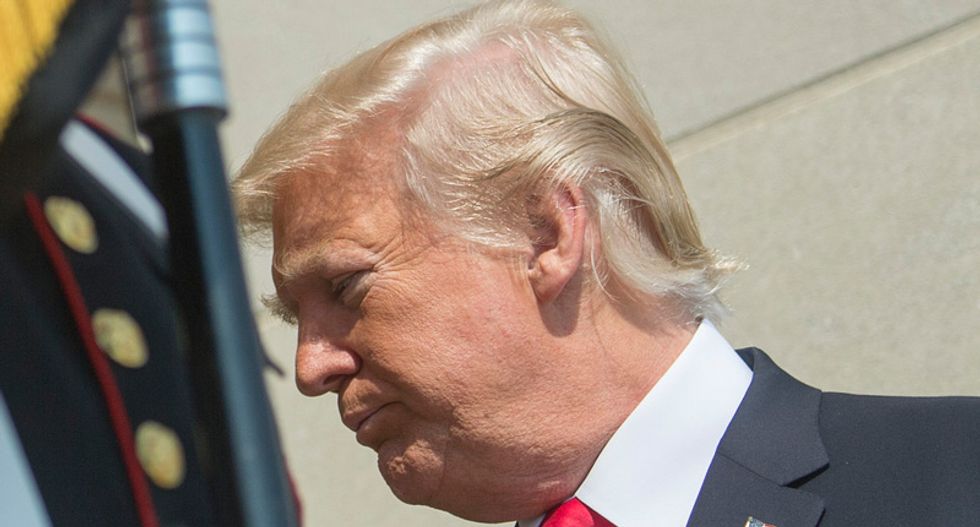 Congress curtailed the president's war powers in February after he escalated tensions the month before with Iran, which like the United States is now grappling with the coronavirus pandemic.

Trump reignited tensions with a tweet Wednesday warning that "Iran or its proxies" were planning a "sneak attack" on U.S. troops or assets in Iraq, which Teheran had done in January in response to the drone strike killing of general Qasem Soleimani.

Other social media users were perplexed by the threat, which appeared to use language from confidential briefings -- like the intelligence briefing Trump had scheduled about an hour before his tweet was posted.

"Upon information & belief" - This is language used in affidavits that accompany warrants or confidential submissio… https://t.co/ON79MXJ6O2
— Joyce Alene (@Joyce Alene) 1585762564.0

Weird choice of phrasing. "Upon information and belief" is usually reserved for civil lawsuits where the evidence i… https://t.co/7JlACkrcYR
— Mike McIntire (@Mike McIntire) 1585761686.0

"Upon information and belief"? Since when did Trump tweets read like affidavits? https://t.co/4XhroHU6cO
— Dan McLaughlin (@Dan McLaughlin) 1585762805.0

@realDonaldTrump For everyone asking, "upon information and belief" is legalese often included court filings and af… https://t.co/uhZpNUN1jS
— Jen (@Jen) 1585763527.0

For non-practitioners "upon information and belief" is something lawyers preface an allegation with if they have no… https://t.co/njd3G6SkrE
— Tim DeLaney (@Tim DeLaney) 1585762045.0

Lmbo upon information and belief? Someone's been hanging out with shitty lawyers. https://t.co/BYffg6iRBo
— Whatever (@Whatever) 1585761914.0