How did insects get their colours? Crystal-covered beetle discovery sheds light 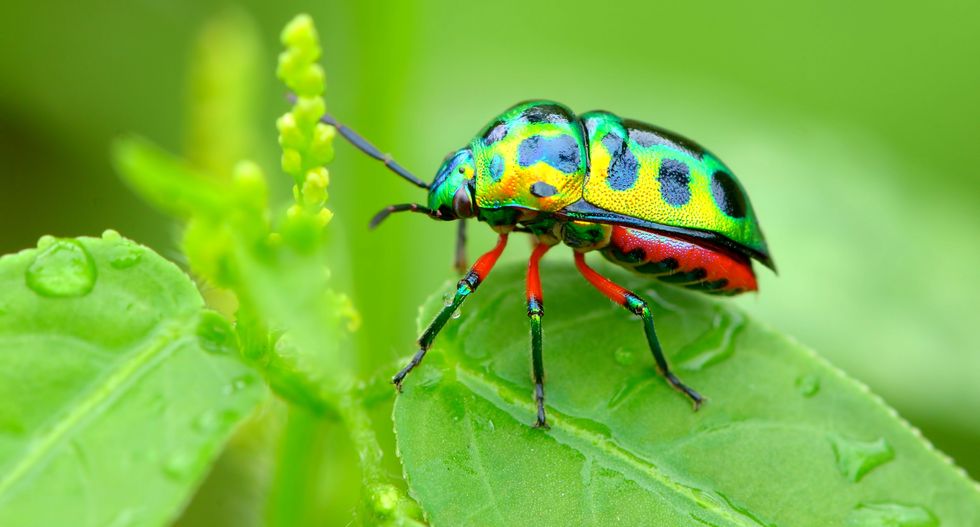 The natural world is full of colour, and few groups of animals are as colourful as insects. From the dramatic black and yellow stripes of wasps and striking spots of ladybirds to the dazzling metallic sheen of jewel beetles, insects show a kaleidoscopic array of hues, patterns and optical effects.

But exactly why insects are so colourful isn’t always clear. How and when did insects evolve colours, and have their roles always been the same? We recently discovered some spectacularly preserved blue-green colours in the scales of 13,000-year-old fossilised weevil beetles. Our find, published in Biology Letters, sheds light on the evolution of the most complex colour-producing structures known in insects: 3D biophotonic crystals.

Until now, we had only ever found one example of such preserved crystals in a fossil. Our new specimen supports the idea that 3D colour-producing structures may have evolved as a means of camouflage rather than to attract attention. But more importantly, the discovery indicates that these fossils may be much more common than we previously thought. This opens up greater potential for us to learn far more about the evolution of these “structural colours”, and the biophotonic crystals that produce them.

These futuristic-sounding structures are part of a family of materials that often have a regular, self-repeating architecture at a nanoscopic level. Such structures are often able to scatter specific wavelengths of light, producing so-called structural colours that have particular optical properties. We encounter these every day: the rainbow sheen on a DVD, the swirling colours of a soap bubble, and the fire-like flash in a crystal of labradorite or opal.

The structural colours produced by biological nanostructures are the brightest and most intense in nature. Classic examples include the dazzling blue flash of a Morpho butterfly’s wing and the golden mirror-like reflection from a Chrysina beetle, both produced by microscopic layers in the insects’ tissues.

These structures produce flashy colours that you can only see from a narrow range of viewing angles and that change depending on viewing angle (a phenomenon known as iridescence). These optical effects, and the associated vivid colours, happen to be very useful for startling predators and attracting mates.

But there are also 3D biophotonic crystal structures that can manipulate light in all directions. In insects, these are found only in the scales of weevils, longhorn beetles, butterflies and moths, where they can form intricate arrays of chitin (the material that makes up the bulk of the exoskeleton of insects) and air.

Studying where these structures have appeared throughout evolutionary history could help us understand why they appeared in the first place. The problem is that the fossil record of 3D biophotonic crystals is virtually non-existent. There is only one known example, a 735,000-year-old fossilised beetle found by one of us (Maria) in 2014 in rock made from layers of sediment deposited by a glacier in Canada.

The crystals were identified with a microscope and electron microscope.

Our new discovery provides another fossilised example of 3D biophotonic crystals from a different type of location, suggesting their preservation is probably more widespread than previously thought. The specimens are 13,000-year-old weevils found by our colleague Scott Elias (formerly of Royal Holloway University), in sediments from the ancient lake of Lobsigensee in Switzerland.

The newly-discovered insects appear rather underwhelming, preserved as small brown fragments of wing cases. But at high magnification, the scales’ colours are astonishing: vivid greens, blues and hints of yellow. We examined the scales using powerful electron microscopes, which confirmed the presence of ordered nanostructured arrays. Preservation of this level of tissue nanostructure is mind-boggling, even for us hardened professionals.

With our microscope studies, we had good evidence that the structures were 3D biophotonic crystals, but to prove it required structural diagnoses and optical modelling. This was done by our colleague Vinod Saranathan, who examined the scales using X-ray analysis at the Argonne particle accelerator near Chicago. Saranathan’s work confirmed that the fossil scales contain a single diamond photonic crystal nanostructure. And so the brilliant green, yellow and blue colours are indeed fossilised structural colours.

However, the colours from the individual microscopic crystals appear to mix at a visible level, suppressing iridescence and producing an overall greenish colour. The result is a matt rather than a shiny colour, unlike that of most insects with 3D nanostructures. This suggests the weevil’s crystals evolved as a form of camouflage, matching it to its leafy background habitat.

Where are the other fossils?

But if the fossilisation of 3D biophotonic crystals is more common than we thought, why haven’t we found more specimens? Maria’s previous research confirmed the crystals should survive the rigours of decay and burial during fossilisation. Instead, the poor fossil record of these structures probably reflects the fact that the scales likely fall off after death.

What’s more, scales bearing structural colours are usually less than 100 microns across, effectively invisible to the naked eye. So it’s likely that many other examples of fossilised 3D crystals have actually been overlooked, due to the small size of insect scales.

What now? Clearly we need to search deeper in time for more examples. Good targets include fossils from the Cenozoic Era (from 66 million years ago to today) that preserve other types of structural colour, and insects hosted in amber, which can preserve scales with evidence of colour.

Most useful of all would be studies of the earliest weevils, from the Late Jurassic and Early Cretaceous periods (163-100 million years ago). These would allow us to test whether the evolution of 3D biophotonic crystals was linked with the proliferation of flowering plants that took place at this time. Close examination of the insect fossil record will likely reveal many more examples, helping us understand the environmental and ecological factors driving evolution of these incredibly complex tissue structures and their functions.