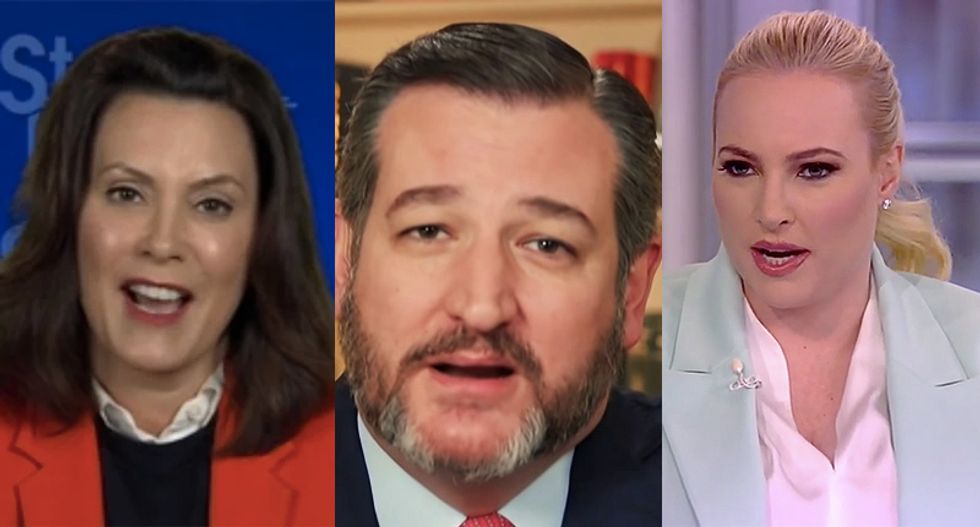 Michigan Gov. Gretchen Whitmer (D) was forced to take time out of dealing with the coronavirus crisis in her state to deal with attack tweets from conservatives Meghan McCain and Sen. Ted Cruz (R-TX).

McCain saw a tweet from someone claiming that Michigan has banned people from buying car seats for children in the store and asked them to purchase online, the Detroit Free Press reported.

Guess it’s good I don’t live in Michigan - otherwise how would I transport my child home from the hospital… https://t.co/KBupVZD0bb
— Meghan McCain (@Meghan McCain)1586696688.0

It's unclear where that myth came from, but Whitmer's order does nothing of the sort.

"Hi Meghan! Our Stay Home, Stay Safe executive order does not ban the purchasing of car seats for children," Whitmer's replied to the tweet.

"Wishing your family well, and happy Easter!" she closed.

According to the Detroit Free Press, the confusion came from when Whitmer expanded certain parts of the state shutdown limiting access to nonessential items in stores that are allowed to stay open.

"The order extending the stay-home period called for stores with more than 50,000 square feet to close areas 'by cordoning them off, placing signs in aisles, posting prominent signs, removing goods from shelves, or other appropriate means' dedicated to carpet or flooring, furniture, garden centers and plant nurseries, and paint,"the Free Press explained. "What triggered McCain's ire was a Friday tweet by Tori Sachs, the executive director of the conservative group Michigan Rising Action."

Sachs attacked the governor, saying that there was clearly a ban, but later backtracked, saying that she was just tweeting to show the "confusion."

"I tweeted the picture to raise awareness of the confusion Whitmer's bans were causing. No mother who needs a car seat for her kid would be in a store right now unless she absolutely needed it. I tweeted it out to raise awareness that this was happening — and that it wasn't right," wrote Sachs.

When dealing with Cruz, however, Whitmer humiliated him to such a degree that he was forced to delete his tweet in disgrace. Cruz used an old photo of Whitmer showing her signing a bill before the coronavirus outbreak. The caption read that she was ushering in a $1,000 fee for those that are not social distancing.

"Hello Senator! This photo is from January of 2019, and is being misused to spread fear and anger. I know you would never intentionally mislead the public during a pandemic, so I'm hoping you'll correct this mistake as soon as possible. Stay safe, & happy Easter from Michigan," she replied.