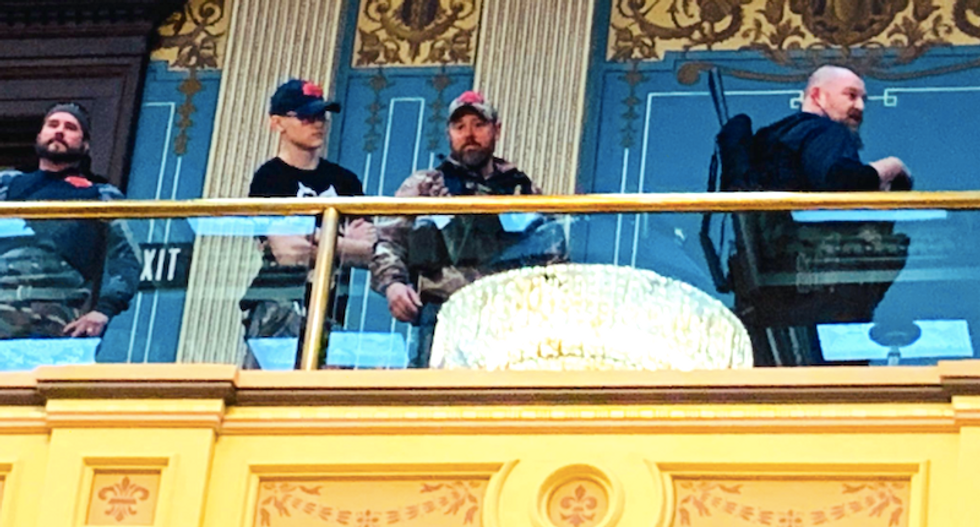 Some lawmakers wore bulletproof vests to the Michigan legislature as protection from gun-toting protesters.

Hundreds of demonstrators gathered outside the state Capitol and then barged inside, demanding access to House chambers, and one state senator said her colleagues felt threatened by the protesters.

"Directly above me, men with rifles yelling at us," tweeted state Sen. Dayna Polehanki. "Some of my colleagues who own bullet proof vests are wearing them. I have never appreciated our Sergeants-at-Arms more than today. #mileg"

The demonstrators packed into the statehouse demanding an end to social distancing measures, shouting at state troopers and legislators in close proximity to one another.

Insiders suspected Trump was deathly ill -- but White House 'lied and lied and lied' about it: reporter

Donald Trump came close to losing his battle with the coronavirus as his White House chief of staff "lied and lied and lied," according to a reporter who suspected the former president was deathly ill.

That former staffer, Mark Meadows, finally admitted to the truth about Trump's illness in his new book, which comes more than a year after the twice-impeached one-term president was hospitalized shortly after he publicly revealed his diagnosis, although he had actually tested positive days earlier.