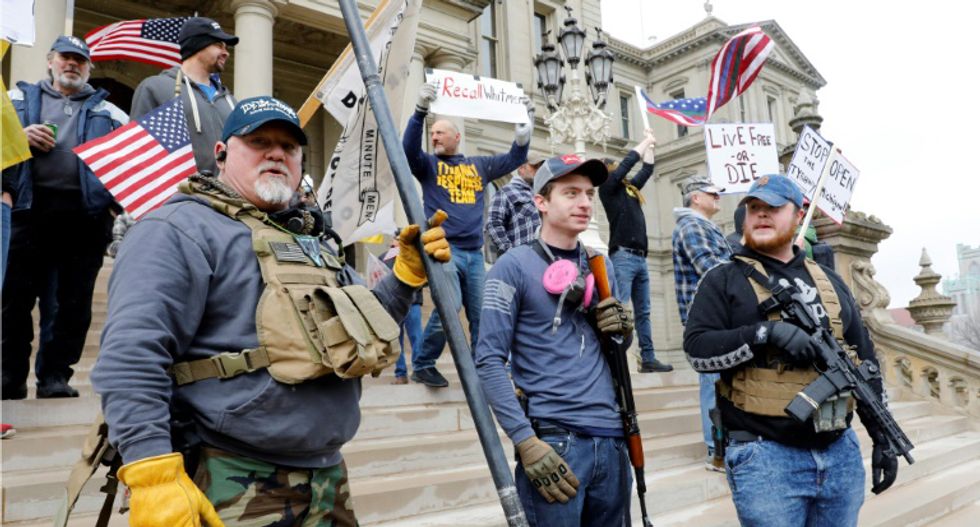 The seemingly spontaneous protests against statewide stay-at-home orders have been promoted and financed by a right-wing network.

The demonstrators themselves are often genuinely frustrated by the lockdowns and economic loss, but the protests are amplified by a well-funded network of conservative individuals and groups, reported the Washington Post.

The Convention of States project -- which launched in 2015 with a large donation from right-wing billionaire Robert Mercer's foundation -- is pushing Facebook ads promoting the demonstrations, soliciting small donations and harvesting data.

“Heavy-handed government orders that interfere with our most basic liberties will do more harm than good,” the ads read.

The project -- which is explicitly aimed at redrawing the U.S. Constitution -- has previously drawn the support of current Trump administration officials Ken Cuccinelli, acting director of U.S. Citizenship and Immigration Services, and Ben Carson, secretary of housing and urban development.

Florida's governor Ron DeSantis, an ally of President Donald Trump who is pushing to reopen his state as soon as possible, has also endorsed the project.

“We’re providing a digital platform for people to plan and communicate about what they’re doing,” said Eric O’Keefe, a longtime associate of the right-wing Koch family and current board president of Citizens for Self-Governance, which is the parent organization of the project. “To shut down our rural counties because of what’s going on in New York City, or in some sense Milwaukee, is draconian."

Conservatives have focused their anger on Democratic governors Tony Evers, of Wisconsin, and Gretchen Whitmer, of Michigan.

Trump ally Stephen Moore, who was once considered for a top post at the Federal Reserve, has been encouraging the demonstrations and claims that a conservative donor had offered to post bail for any protesters who get arrested.

Meshawn Maddock, a Trump campaign adviser and "Women for Trump" activist, helped organize "Operation Gridlock" in Michigan, where Facebook ads promoting the protests were funded by the Michigan Freedom Fund -- which is linked to the family of Education Secretary Betsy DeVos.

However, Greg McNeilly, the fund's director, insists the "grass-roots fundraising efforts" have nothing to do with the DeVos family.

Demonstrations in Texas have been promoted by the conservative Texas Public Policy Foundation, which shares board members with the Convention of States initiative and has ties to the Trump administration.

Mercer, the hedge fund billionaire who linked Trump's 2016 campaign to data firm Cambridge Analytica and white nationalist Steve Bannon, declined to comment on the project he seeded with a $500,000.

The chief executive of the Koch-backed Americans for Prosperity group insisted the right-wing organization was not involved in the demonstrations, but some see the protests as an outgrowth of efforts to deny climate change and hinder government regulations.

“The involvement of the Koch institutional apparatus in groups supporting these protests is clear to me,” said Robert Brulle, a sociologist at Drexel University. “The presence of allies on the board usually means that they are deeply engaged in the organization and most likely a funder.”

“These are extreme right-wing efforts to delegitimize government,” he added. “It’s an anti-government crusade.”