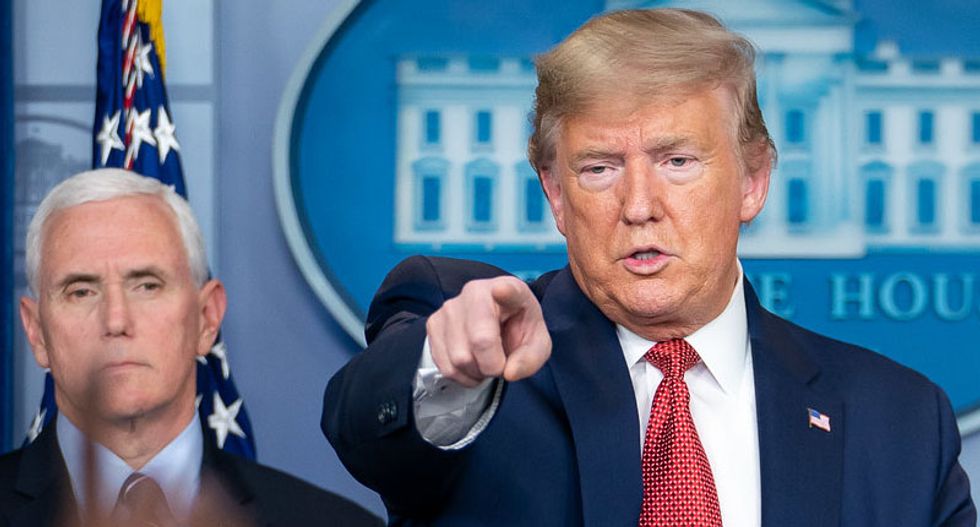 During a Coronavirus Task Force briefing late Thursday following news that 10 million Americans filed jobless claims over just a two-week period last month, President Donald Trump downplayed the intensifying economic downturn as “an artificial closing” and insisted that businesses like restaurants will be “bigger and better” than before once the COVID-19 crisis subsides.

“It’s not like we have a massive recession or worse. It’s artificial because we turned it off,” Trump said, drawing a distinction that makes no difference to those who have lost their jobs—as well as employer-provided health insurance—or seen their hours drastically cut due to the crisis.

“Oh thank God, for a second I thought I was actually unemployed and not just artificially unemployed,” one Twitter user quipped in response to the president’s comments.

Amid widespread criticism that the federal government’s economic stimulus and relief efforts have been far too slow and inadequate, Trump said “we will probably do more.”

Trump's message to the 6 million people who filed unemployments claims in the last week is that "it's an artificial… https://t.co/nIHTueejwN
— Aaron Rupar (@Aaron Rupar) 1585870835.0

“This kind of upending of the labor market in such a short time is unheard of,” wrote Heidi Shierholz of the Economic Policy Institute. “Given the incredible deterioration of the labor market in a matter of weeks, federal policymakers will absolutely need to come back and provide more desperately needed relief, and more support for the recovery once the lockdown is over.”

A group of Blake Masters’ former classmates at Green Fields Country Day School in Tucson have condemned him in no uncertain terms in an open letter saying that he would “lead Arizona down a dark, dystopian path.”


Masters, the Republican U.S. Senate nominee, won a crowded GOP primary election in August after being endorsed by former President Donald Trump. Masters has campaigned on the “Big Lie” that Trump actually won the 2020 election and has said he would support enacting strict anti-abortion laws nationwide if elected.

Right's accusations against LGBTQ advocates get even worse

Last spring, as the right began using the word "grooming" as a slur against LGBTQ people and their allies, journalist Melissa Gira Grant noted at the New Republic that the word provided a way to "say both the quiet and the loud part." Contorting a term long used to describe real instances of child sex abuse into a weapon to be deployed against LGBTQ people and commonplace policies — for example, that their existence can and should be acknowledged in schools — was the "loud" part. It was a shocking but pithy means of demonization; as Gira Grant wrote, the "right is using the reality of child abuse to raise unfounded fears and panic about criminal and predatory behavior hiding in plain sight." The quiet part was the secondary implication: If one's "enemies" really are "an ill-defined yet pervasive threat to children, what wouldn't be justified in stopping them?"

This week, that quiet part got noticeably louder, as right-wing activists escalated the already-dangerous rhetoric of "grooming" — language that multiple social media platforms have banned from use as an insult related to LGBTQ issues — and graduated into claims that LGBTQ people and liberals are literally kidnapping and trafficking children.

On Wednesday night's edition of Late Night with Seth Meyers, the namesake host began the broadcast by channeling the legendary news anchor Walter Cronkite to share an excerpt of New York Times correspondent Maggie Haberman's new book, Confidence Man: The Making of Donald Trump and the Breaking of America.

Contained within Haberman's retelling of her encounters with the former president is a passage recalling an instance in which Trump became enraged after his then-personal attorney, ex-New York City Mayor Rudy Giuliani, used the restroom aboard one of Trump's airplanes.