'Trumpists' will 'live with the stain' of downplaying coronavirus threat for a 'lifetime': Morning Joe panelists 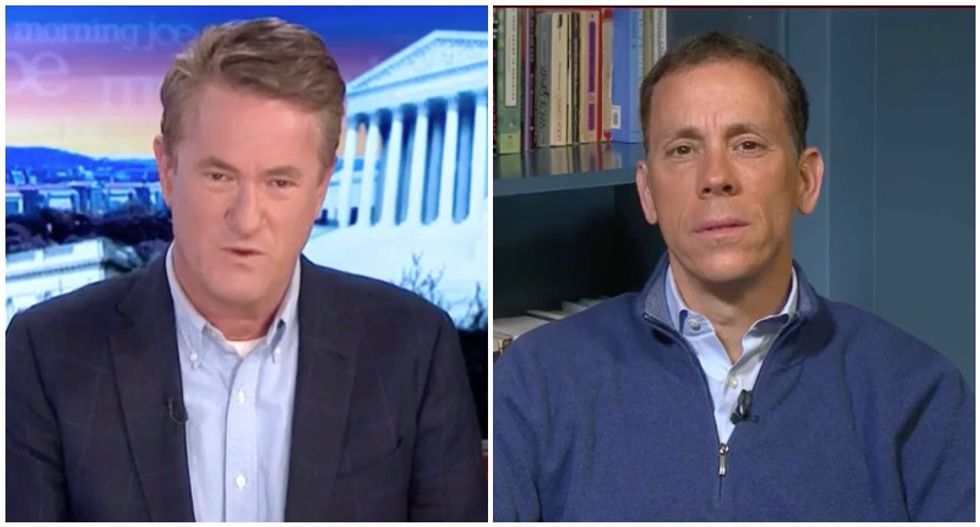 Panelists on MSNBC's "Morning Joe" agreed that President Donald Trump's supporters will live with the "stain" of denying the coronavirus for the rests of their lives.

Host Joe Scarborough blasted Trump-loving Florida Gov. Ron DeSantis for keeping his state open in an apparent attempt to protect the president, and he again hammered right-wing broadcasters for downplaying the threat for the same reason.

"I do want to underline the recklessness of talk show radio hosts and people online and Trumpists, these Trump hacks who push and who have been mocking people like Zeke Emanuel who warned about this day coming and so they, of course, are attacked online," Scarborough said. "I was attacked online by an idiot about quoting the Imperial College study, and then, of course, the president is now quoting those same numbers. So, of course, I'm sure they'll fall in line and talk about how brilliant Donald Trump was."

"These miracle cures, I've seen quacks and demagogues and people getting on and talking about hydroxychloroquine, how it's a miracle drug and how everybody who ever took it recovered and it's a miracle drug," Scarborough added. "Even Donald Trump yesterday backing off of that, saying we still have a ways to go after the press conference."

But Scarborough still doesn't understand why DeSantis remains publicly skeptical of the threat and refuses to issue a statewide lockdown like other states with significant outbreaks.

"I'm almost at a loss for words about what's happening in the state of Florida with Ron DeSantis, who refused to cancel spring break, who refused to get people off of sandbars where 100 boats would crowd around and people would have drinking parties all weekend next to each other, who is still refusing to close restaurants, who is still refusing to do what every health care expert in the world is begging leaders like him to do," Scarborough said, "and he's not doing it in the state that has millions of senior citizens, and they are dying. They are beginning to die, and yet he's still not moving. I must say, I don't get it."

"I think the deniers are going to have to live with the stain of this for a lifetime," VandeHei said. "There's no way -- like, now you look delusional if you're not listening to what is now a consensus. It took Donald Trump a long time to get there, as you talked about for months, but now we're there. There's a national consensus -- Republicans, scientists, doctors, anybody who's looked at the data, who's looked at the science now agrees that there's a real chance that 100,000 to 250,000 die, if we don't take quick action it could be higher than that. That the effect will mean there's going to be quarantine for almost everybody, probably not just April, definitely May, potentially into June, that you needed that economic package just to be able to keep the economy afloat for the next two months."

VandeHei warned that Congress would probably need to double the $2 trillion stimulus package to keep the economy afloat over that period, and he called on conservative media figures and elected officials to face the facts.

"Anybody who's out there, whether you're on Fox or whether you're a governor and you're still saying, 'Well, I don't know, did we have to take swift action,' it's nonsensical," VandeHei said. "Look at China, look at Italy, look at Spain, New York, look at New Orleans, look at Detroit. This isn't rocket science. it's not a political debate. The consensus is there."

"If people in Florida are partying and infecting elderly people who are at such high risk, shame on them," he added. "That's going to require additional presidential pressure. There hasn't been a national mandate that everybody quarantine. The next step is, he's going to have to get out there and force people to do the things that they have to do even if there's bad economic consequences in the short-term."