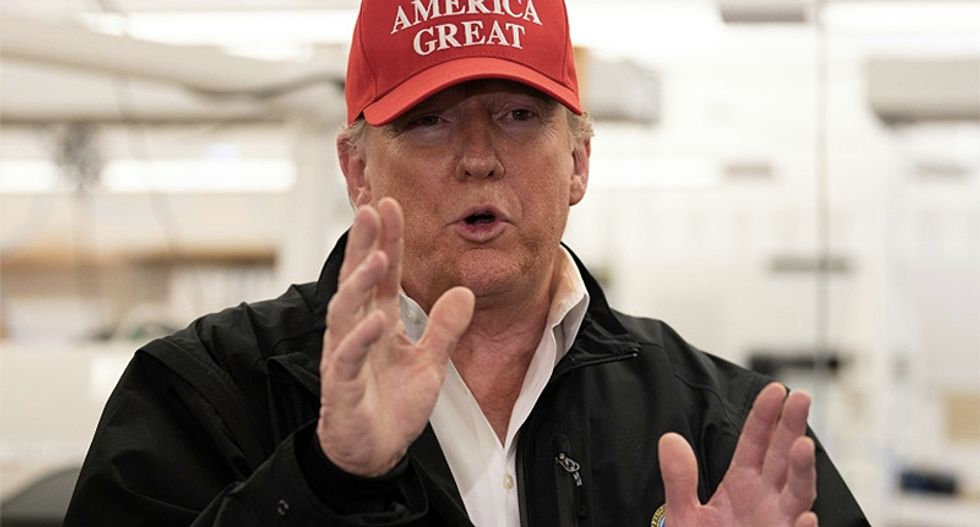 Donald Trump has spent a lifetime exploiting chaos for personal gain and blaming others for his losses. The pure madness in America’s response to the coronavirus pandemic – shortages of equipment to protect hospital workers, dwindling supplies of ventilators and critical medications, jaw-dropping confusion over how $2.2 trillion of aid in the recent coronavirus law will be distributed – has given him the perfect cover to hoard power and boost his chances of reelection.

As the death toll continues to climb and states are left scrambling for protective gear and crucial resources, Trump is focused on only one thing: himself.

He’s told governors to find life-saving equipment on their own, claiming the federal government is “not a shipping clerk” and subsequently forcing states and cities into a ruthless bidding war.

Governors have been reduced to begging FEMA for supplies from the dwindling national stockpile, with vastly different results. While we haven’t seen what “formula” FEMA supposedly has for determining who gets what, reports suggest that Trump’s been promising things to governors who can get him on the phone.

Our narcissist-in-chief has ordered FEMA to circumvent their own process and send supplies to states that are “appreciative”.

Michigan and Colorado have received fractions of what they need while Oklahoma and Kentucky have gotten more than what they asked for. Colorado and Massachusetts have confirmed shipments only to have them held back by FEMA. Ron DeSantis, the Trump-aligned governor of Florida, refused to order a shelter-in-place mandate for weeks, but then received 100% of requested supplies within 3 days. New Jersey waited for two weeks. New York now has more cases than any other single country, but Trump barely lifted a finger for his hometown because Governor Andrew Cuomo is “complaining” about the catastrophic lack of ventilators in the city.

A backchannel to the president is a shoe-in way to secure life-saving supplies. Personal flattery seems to be the most effective currency with Trump; the chain of command runs straight through his ego, and that’s what the response has been coordinated around.

He claims that as president he has “total authority” over when to lift quarantine and social distancing guidelines, and threatens to adjourn Congress himself so as to push through political appointees without Senate confirmation.

And throughout all of this, Trump has been determined to reject any attempt of independent oversight into his administration’s disastrous response.

When he signed the $2 trillion emergency relief package into law, he said he wouldn’t agree to provisions in the bill for congressional oversight – meaning the wheeling-and-dealing will be done in secret.

He has removed the inspector general leading the independent committee tasked with overseeing the implementation of the massive bill.

He appointed one of his own White House lawyers, who helped defend him in his impeachment trial, to oversee the distribution of the $500 billion slush fund for corporations. That same day, he fired Inspector General Michael Atkinson – the inspector general who handed the whistleblower complaint to Congress that ultimately led to Trump’s impeachment.

There should never have been any doubt that Trump would try to use this crisis to improve his odds of re-election.

Stimulus checks going to the lowest-income earners were delayed because Trump demanded each one of them bear his name. As millions of the hardest-hit Americans scrambled to put food on the table and worried about the stack of bills piling up, Trump’s chief concern was himself.

It doesn’t matter that this is a global pandemic. Abusing his power for personal gain is Trump’s MO.

Just three and a half months ago, Trump was impeached on charges of abuse of power and obstructing investigations. Telling governors that they need to “be appreciative” in order to receive life-saving supplies for their constituents is the same kind of quid pro quo that Trump tried to extort from Ukraine, and his attempts to thwart independent oversight are the same as his obstruction of Congress.

Trump called his impeachment a “hoax.” He initially called the coronavirus a “hoax.” But the real hoax is his commitment to America. In reality he will do anything—anything—to hold on to power.

To Donald Trump, the coronavirus crisis is just another opportunity.