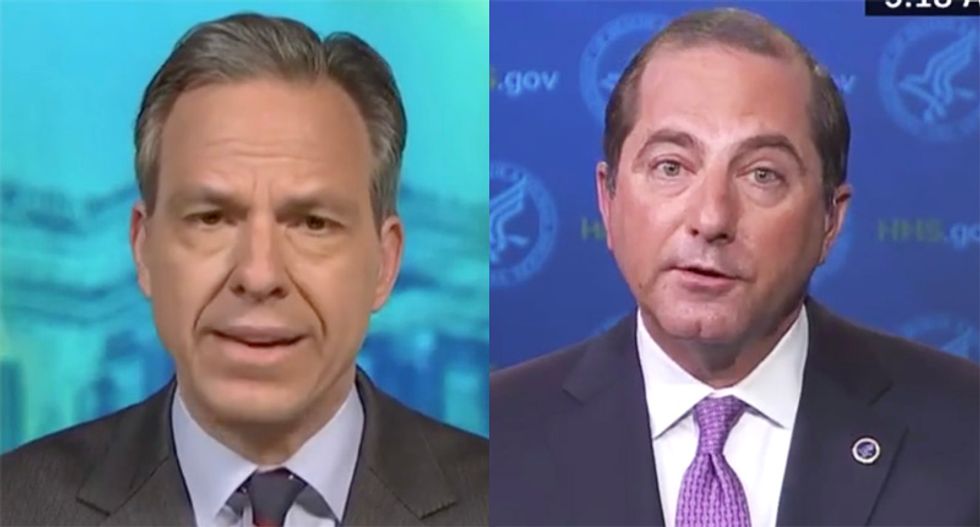 Health and Human Service's Secretary Alex Azar was forced to backtrack on CNN's "State of the Union" on Sunday morning after stating that the poor health of Americans was a major factor in the spread of the coronavirus in the country.

Asked by host Jake Tapper about the failures of Donald Trump's administration during the COVID-19 pandemic that has led to approximately 90,000 U.S. deaths, Azar tried to defend the administration's efforts by stating the U. S. is doing more testing than any other country -- skipping over the fact the U.S. trails other nations in per capita testing.

'As the president said, we haven't had any individuals to our knowledge who had to die because they didn't have a ventilator or didn't have an ICU bed and that's a really important measure of health care system resilience and that's what's enabling us now to do what we've talked about, move towards reopening and getting back towards a normal state," Azar offered.

"I understand that, but we have almost 90,000 Americans who are now dead because of this," Tapper replied. "I don't think that this is anything to celebrate."

"Oh, Jake, you can't celebrate a single death," Azar replied. "Every death is a tragedy but the results could have been vastly, vastly worse. It's also important to remember, Jake --"

"But it's worse for us than it is for anyone else," the CNN host interrupted.

"That's actually not factually correct when you look at mortality rates as a percent of diagnosed cases," Azar shot back, to which Tapper replied, "The number of dead bodies."

"Every death is tragic, but we have maintained our health care burden within the capacity of our system to actually deal with it," Azar continued. "Unfortunately the American population is a very diverse -- it is a population with significant unhealthy co-morbidities that do make many individuals in our communities, in particular African-American, minority communities, particularly at risk here because of significant underlying disease health disparities and disease co-morbidities and that is an unfortunate legacy in our health care system that we need to address."

"I want to give you an opportunity to clear it up because it sounded like you were saying the reason there are so many dead Americans is because we're unhealthier than the rest of the world," Tapper suggested. "I know that's not what you meant."

"Oh, no, we have a significantly disproportionate amount of obesity, diabetes, these make any type of disease burden --," Azar attempted only to be cut off by the CNN host.

"Of course, but that doesn't mean it's the fault of the American people when the administration didn't take adequate steps in February," Tapper replied.

"Please don't distort, Jake, this is about simple epidemiology and stating that if we have hypertension, if we have diabetes, we present with greater risk of severe complications from this coronavirus. that's all I was saying, and you know that," Azar exclaimed.