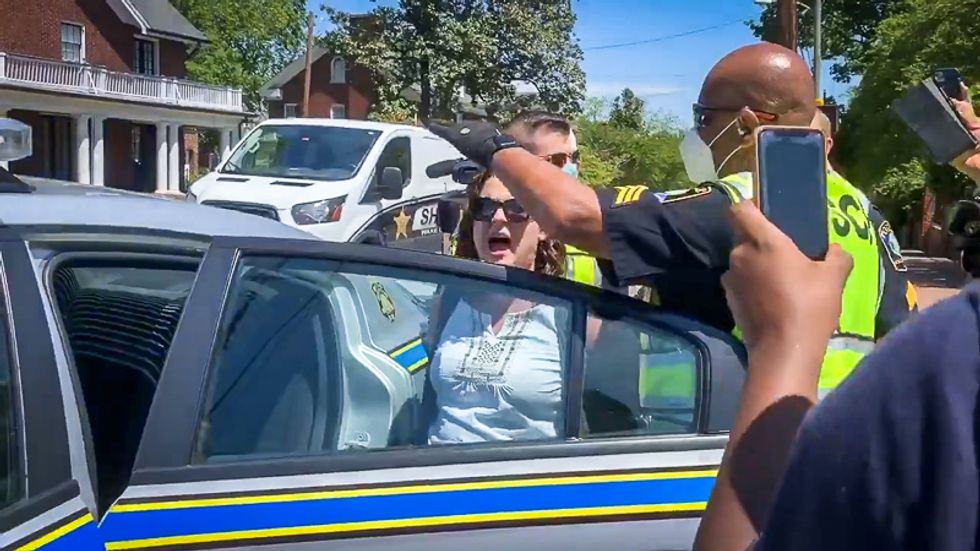 Ashley Smith is seen being taken into police custody during protest in Raleigh, North Carolina (Twitter)

The husband of the woman who leads the Reopen NC movement says people should be willing to kill, if necessary, to resist the “New World Order” and emergency orders imposed by state government to contain the coronavirus pandemic.

Adam Smith posted a string of Facebook Live videos on Facebook on Friday, May 22, 2020 that culminated with a chilling threat.

“But are we willing to kill people? Are we willing to lay down our lives?” he asked. “We have to say, ‘Yes.’ We have to say, ‘Yes.’ Is that violence? Is that terrorism? No, it’s not terrorism. I’m not trying to strike fear in people by saying, ‘I’m going to kill you.’ I’m gonna say, ‘If you bring guns, I’m gonna bring guns. If you’re armed with this, we’re going to be armed with this.’”

A retired Marine who owns a payment-processing company in Burke County, nestled in western North Carolina’s Blue Ridge Mountains, Smith posted four Facebook Live videos over the course of the day while driving his car. Smith said in the videos that he feels called by God and by his understanding of the Constitution to prepare for a violent showdown.

At the outset of the final video, he interrupted his testimonial to accept a bag of fast food from a restaurant worker through a drive-thru window.

“I believe God’s drawing a plumb line,” he said. “And he’s wanting us to choose which side we’ll be on…. Had to grab me a little grub — which of history we’ll be on.”

In another video, captioned “Those who are awake must be ready to fight,” Smith complained about a “bombardment” of media stories and social marketing surrounding the coronavirus pandemic, along with appeals to social solidarity and cooperation, which he contended are “just making it normal for this quarantine level of society that they want us to live in.

Adam Smith called on fellow military veterans to attend the rallies in one of the videos, warning that “today is the day the Constitution is under attack and tomorrow might be the day where all our rights are removed.”

Smith has removed the videos from his Facebook page since being contacted by Raw Story.

Reached by phone on Saturday, Smith at first appeared to walk back his statement about being “willing to kill people,” saying it was more of a tribute to the American revolutionaries of 1776 than a comment on the emergency orders issued by Gov. Cooper. But pressed further, he insisted that violence has to be an option.

“I’m trying to make the men of this country stand up,” Smith said. “The last thing we want is bloodshed, but that’s something they should know we’re willing to do.”

He said he can understand how some people would see his statement as an incitement to domestic terrorism, but added, “If you think about terrorism, the whole act is to incite terror in people. We don’t instill terror in people. The point is to instill fear in the government…. It’s to create a check and balance. We know that freedom from time to time has to be renewed by the blood of tyrants. We were founded through rebellion and bloodshed.”

A self-described “constitutionalist,” Smith expounded an argument for American citizens’ right to redress grievances against the government through force of arms that is broadly consistent with the far-right militia movement. An Anti-Defamation League backgrounder on the militia movement for law enforcement states that proponents have “claimed that militia groups were: (a) equivalent to the statutory militia; (b) not, however, controlled by the government; and (c) in fact, designed to oppose the government should it become tyrannical.”

Central to the militia movement that first emerged in the early 1990s is a conspiratorial worldview.

“But the militia movement not only accepted the traditional conspiracy theories, it created a host of new ones; combined, they described a shadowy movement intent on creating a one-world socialist government no matter what the cost,” the backgrounder says. “This ‘New World Order,’ using the United Nations as its primary tool, had already taken over most of the planet. The United States was still a bastion of freedom, but its own government was collaborating with New World Order forces to strip Americans slowly of their freedoms in preparation for the final takeover.”

Adam Smith’s violent rhetoric is seemingly at odds with the stance of Reopen NC, which describes itself as “a peaceful action group.”

But in an interjection during her husband’s interview with Raw Story, Ashley Smith backed his argument that a citizen militia has the right to act as a check on duly elected officials.

“When we have a governor that’s not acting under the constitutional guidelines that we set for his oath of office, then it’s up to the people to check his authority,” she said. “That’s at the heart of the Constitution.”

Ashley Smith said her comments do not represent the official views of Reopen NC.

Adam Smith’s call for violent resistance to the “New World Order” and his involvement with a boogaloo group that has been carrying firearms through downtown Raleigh signals a blurring of the line between the fringe and mainstream wings of the North Carolina reopen movement.

On May 16, Smith showed up clad in a matching camouflage jacket and hat, a black face covering and sunglasses while wielding a high-powered rifle to join a local boogaloo group that has gained national notoriety after photos of armed members ordering food at Subway went viral.

The embryonic boogaloo movement originated as a meme shared in online forums by gun enthusiasts that references Breakin’ 2: Electric Boogaloo — essentially a second-rate sequel — as code for a second civil war, or revolutionary war. Adherents began modifying the term in 2019 to variants like “big luau,” giving rise to Hawaiian-style shirts as a visual cue. Young men inspired by the boogaloo mythology showed up wearing Hawaiian-style shirts and body armor at the January 2020 Second Amendment rally in Richmond, Va., and have become a mainstay of reopen rallies across the country over the past two months.

Smith introduced himself to the boogaloo activists on May 16 by saying that he was invited by Stephen Wagner, who is the president of the Johnston County chapter of Reopen NC.

Ashley Smith told Raw Story that the notion that a citizens militia has the duty to maintain a level of armament equal to the government comes from Federalist Paper No. 46, by James Madison.

Madison’s essay is an argument for federal government that is intended to allay the fears that the power of the states would be overwhelmed. “Let a regular army, fully equal to the resources of the country, be formed; and let it be entirely at the devotion of the federal government,” Madison wrote. “Still it would not be going too far to say that the state governments, with the people on their side, would be able to repel the danger.

The boogaloo gatherings, a weekly occurrence in Raleigh since May 1, have taken place separate but alongside the reopen rallies. The Raleigh police have threaded a needle to avoid making arrests by accepting the boogaloo activists’ assertion that their gatherings are not protests; North Carolina law makes it illegal to carry a dangerous weapon as participant or spectator at a demonstration. In turn, the boogaloo activists have complied in some instances with the officers’ requests to put away signs and flags. While the boogaloo activists use euphemisms like “exercising” to describe their activity, they frequently disparage the state response to the pandemic terms similar to the reopen protesters — as a government overreach and as a public-health threat that is exaggerated for the purpose of scaring people into giving up their rights to assemble and conduct business.

Meanwhile, the reopen rallies, where participants abide by the law against carrying firearms at demonstrations, have provided a more respectable forum for Republican politicians. US Rep. Dan Bishop has addressed the reopen rallies, along with Robinson, and state Rep. Larry Pittman. Meanwhile, Ashley Smith told followers on Facebook that she met with Lt. Gov. Dan Forest and he encouraged their cause.

Smith was arrested by State Capitol Police during the April 28 reopen rally after being warned not to step on the sidewalk in front of the executive mansion.

As the officers placed her under arrest, Smith can be heard in a video posted by the Raleigh News & Observer saying, “My tax dollars paid for this. You’re dishonoring the flag. You’re not an oath-keeper. You’re ashamed of this Constitution.”

“Look at these thugs arresting her over walking on the sidewalk,” he said.

Smith faces charges in Wake County court for misdemeanor resisting an officer and violation of executive orders. On March 14, Gov. Cooper signed an executive order to prohibit mass gatherings in North Carolina. A modification of the order issued on March 27 defined mass gatherings as “any event or convening that brings together more than 10 persons in a single room or single space at the same time.” That provision is the basis of the charge against Smith.

In his livestream on Friday, after saying his “brothers in arms” must be “willing to kill people,” Adam Smith turned his attention to the executive orders.

Then he mentioned a recent protest he had read about in England, in which people protesting lockdown orders had been arrested.

“See, if we’d have had the guns, armed up and lined all around the park, [we could have] said, ‘No, you’re going to let ’em speak,’” he said. “And when they came and said, ‘We’re gonna take this freedom of speech from you,’ someone would have said, ‘No, you’re not. Not unless you want a gunfight on your hands. Unless you want the OK Corral, you better back down.’”

A group of Rep. George Santos' constituents traveled from New York to Washington, D.C., to call for his resignation.

Concerned Citizens of NY-03 arrived Tuesday afternoon on Capitol Hill, where they spoke to reporters and then planned to drop off a stack of petitions urging the newly elected congressman to step down over a series of lies that have resulted in criminal investigations and a House Ethics Committee probe.

These 7 State of the Union promises crashed and burned

It is a time-honored tradition that U.S. presidents offer the American people a long list of promises and platitudes that cannot be converted to reality.

This has become known as the State of the Union address.


“This morning there have been calls to Okemos High School and Jackson High School about an active shooter which has been found to be a hoax. Reminder that reporting a false threat against schools or business is a crime,” Michigan State Police First District tweeted Tuesday morning.