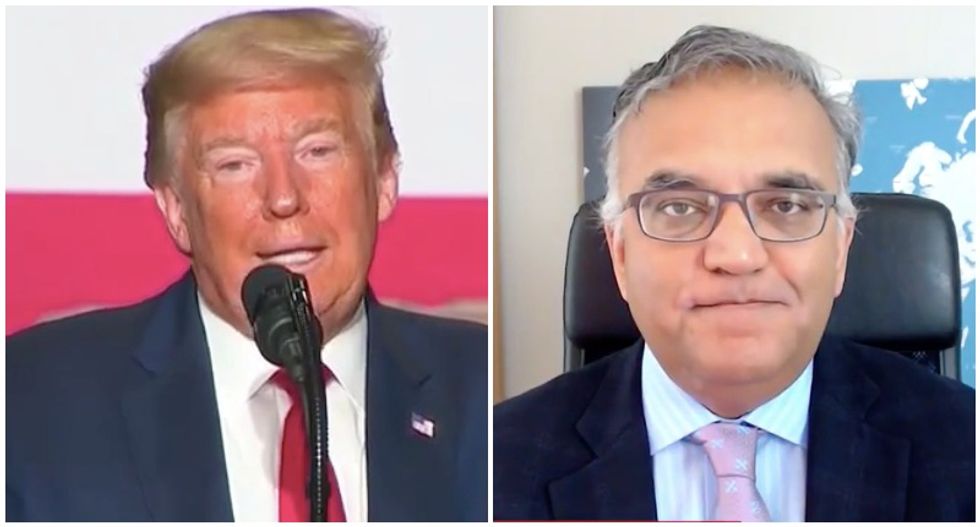 A public health expert gave President Donald Trump a failing grade on the most basic test of the coronavirus pandemic.

The president questioned the need for testing, which he called "overrated," and MSNBC's Mika Brzezinski apologized before asking Dr. Ashish Jha to comment on Trump's remarks.

"Gosh, I feel silly to ask you to comment on this, but there is sense among the president, that if you have testing, then you have more cases," said the "Morning Joe" co-host. "Why would that be a bad thing, doctor?"

Jha, dean of the Brown University School of Public Health and director of the Harvard Global Health Institute, started off by explaining that tests don't cause cases.

"We're going to have cases either way," Jha said. "Testing doesn't give you cases, the virus gives you cases. What testing does, it lets you identify who is infected. Then if you trace their contacts and isolate people who are infected, it lets you slow down the outbreak. This is Outbreak 101, Disease Outbreak 101. Testing doesn't cause cases, the virus is doing that. Testing is helpful in identifying and isolating the cases so other people don't get infected."

Some Republican lawmakers called Jha partisan after he stressed the importance of testing during a congressional hearing, and the physician said he was mystified.

"I was a little puzzled by it," he said. "Again, I don't know any public health person, any physician, anybody who is at all knowledgeable about this, who thinks testing is not important. The White House thinks it is important, right? They're testing their folks every day, so I was a little puzzled. I think they saw it as a critique of the White House. I was saying that we have not had the kind of testing response we need to keep the American people safe. It has contributed to shutting down the American economy. I think that's common sense. My sense is that pretty much everybody agrees with that. I was puzzled that it was somehow partisan."

Jha also explained his views on wearing a mask, which he said had changed in recent weeks in light of new scientific evidence.

"I have changed my views in the last six weeks, as the science has changed," he said. "The science really is changing on this. More and more, every day, we're seeing evidence that masking is very important. If there was universal masking, if all people when they were outside wore masks, it could substantially decrease the transmission of the disease. It could potentially substantially decrease the severity of the disease people get. The size of the kind of inoculum, the droplets you inhale, can make a difference in how sick you get. I have really now come to believe that the evidence is pointing pretty clearly toward universal masking."

He encouraged elected officials -- including the president, who refuses to wear a mask in public -- to set a good example.