Trump angry with FBI's Christopher Wray and wants to replace him: report 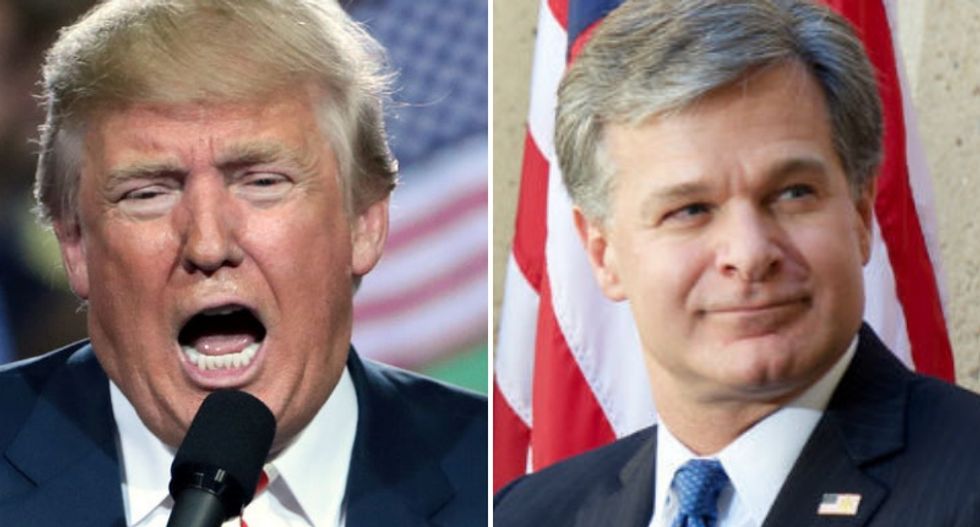 According to a report from Axios, Donald Trump is reportedly angry with FBI Director Christopher Wray for staying silent on the recent revelations in the Michael Flynn case and would like to dump him.

The report, from Jonathan Swan, notes the president is being restrained from another firing by close aides and Attorney General Bill Barr.

"Trump's dissatisfaction with Wray — whom he nominated for the post in 2017 after firing Jim Comey — is nothing new," Swan wrote. "A source who has discussed the FBI director repeatedly with the president said Trump 'has never felt like Wray was his guy' and does not trust him to 'change the culture' of the FBI."

The report goes on to note, "Trump was especially angered by what he views as Wray's reluctance to publicly criticize actions taken by Comey and by Wray's relatively muted reaction to the FBI's misconduct in seeking the surveillance of Trump campaign associate Carter Page."

According to the report, close aides to Trump have started a whisper campaign against the now-embattled FBI director, hinting to the president that Wray has no interest in rooting out what they perceive to be "corruption" within the agency.

For the moment, the report notes, Wray's job is safe because some White House officials don't want another controversy so close to the election which is not looking good for the president based on recent polls. Additionally, "....there isn't an obvious replacement who'd both pass muster on Capitol Hill and be the sort of loyalist Trump wants to run the FBI," Swan wrote.